Living through a remodel is NOT for the faint of heart!  I am telling you.   We’ve been working on our whole house for what seems like forever, and decided to take a little time to clean up our ONE and only fully working bathroom.  I should say, that truly I can handle a lot when it comes to remodeling… but having a functioning, free from tools bathrooms is just one of those luxuries I don’t like to live without. So, we decided to keep it as simple as we could, and that means keeping quite a bit in tact. But overall I am in LOVE with the results.

I’m going to show you the first half the vanity etc, and then in a couple weeks I will show you the tub makeover with Bath Fitter! 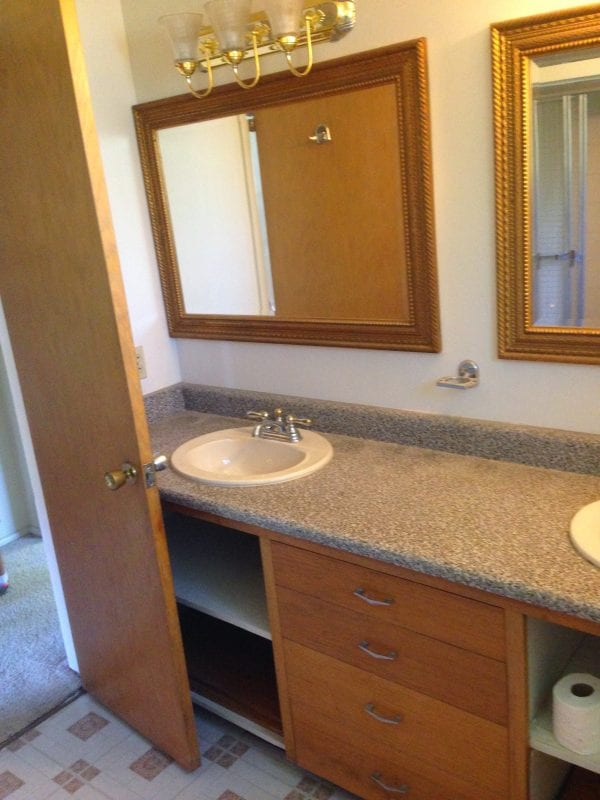 (these are cell phone walk through pictures, so the quality isn’t great!) 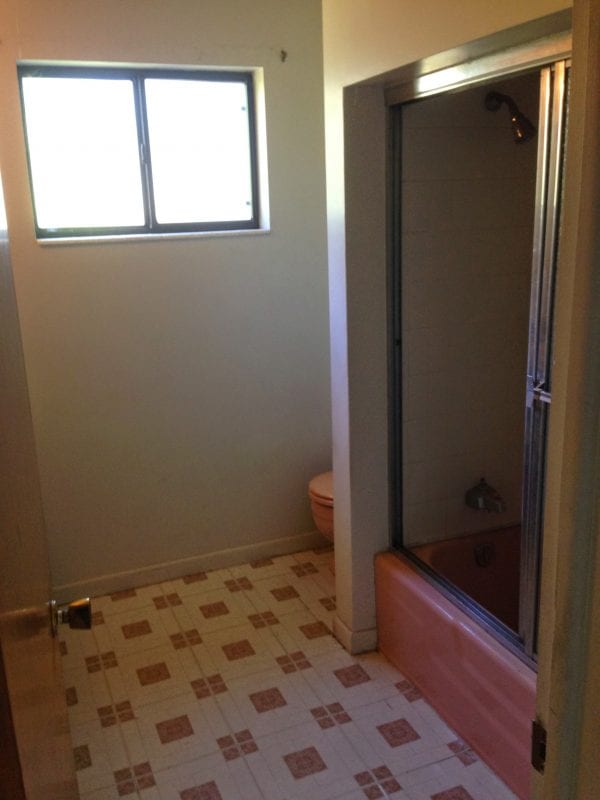 Shudder… are you tingling and scared yet?

Over the first 8 months we have lived here, there have been some things we had to do.  Total 6 major things.  It is funny because it didn’t seem like we had done a lot until I started writing this post and I realized all that we had done.

First, I removed the old built-in shower doors.  About 8 months later, we ripped out the header that was above the glass built in doors, to open up the head room in the shower and give a chance for the air to be drawn out of the room through the fan we installed.  (I’ll tell you more about that soon, for now, ignore our pink tub, I know you’re jealous!) 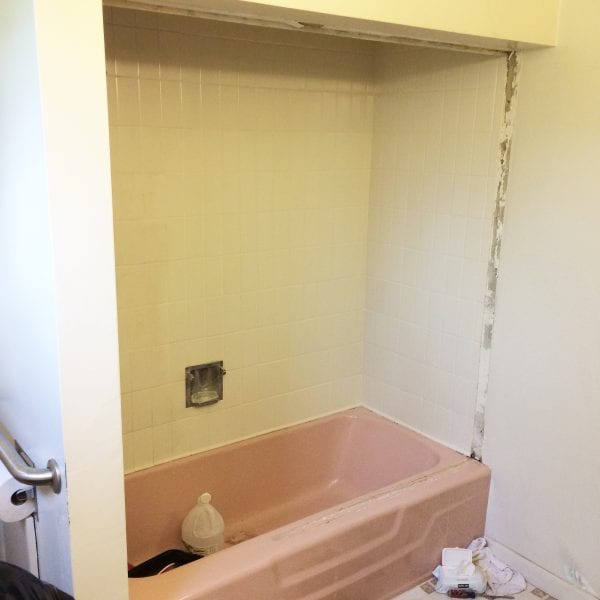 Next, while fixing the drywall in the rest of the house, we opted to recycle the pocket door from our master bathroom and install it into this space.   This really increased the foot room and size of the room.  I can’t tell you how much I love a good pocket door in a small space.  It makes such a huge difference.  Fourth, we replaced the leaking toilet, it is such a disgusting feeling stepping on the floor and seeing water seep up through the peal and stick tiles, and realizing somehow there is a slow leak … 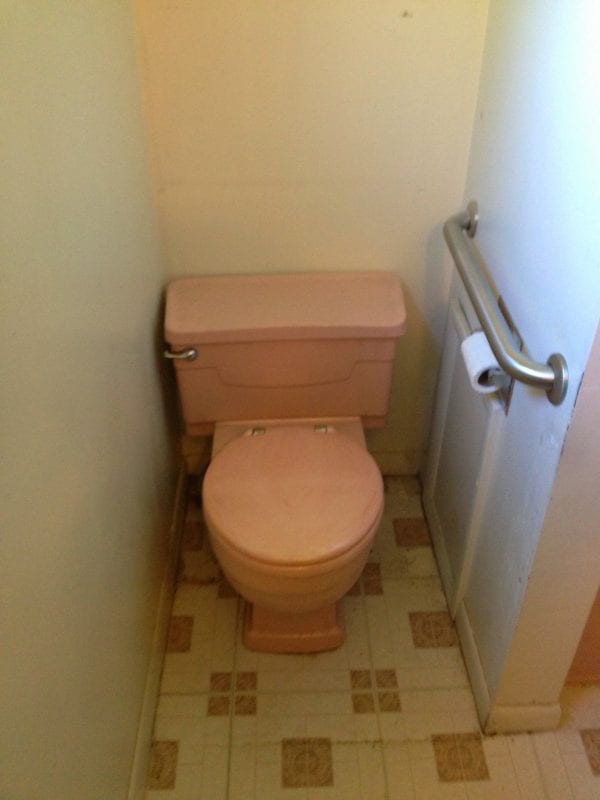 This is the one we chose, I LOVE it!  Mostly because do you see the awesome smooth sides?  Yeah, that is the most amazing feature ever! 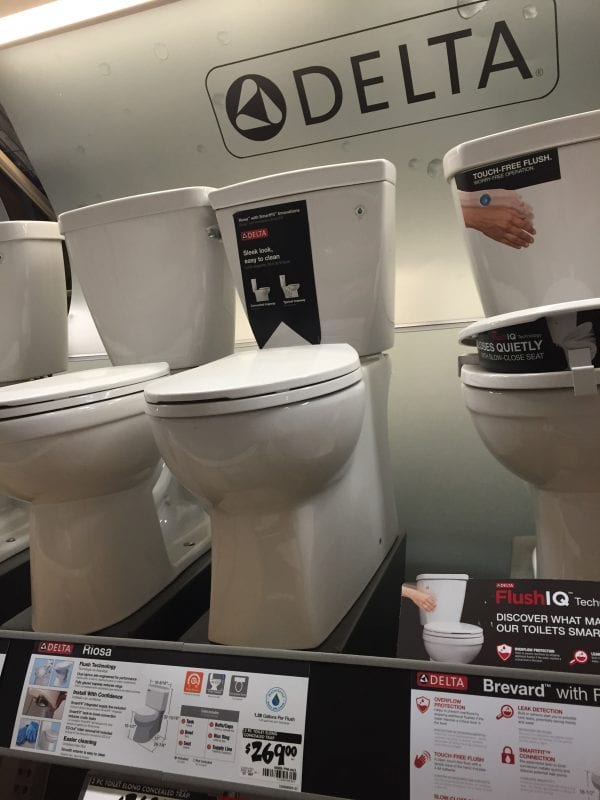 And because of the leak, we needed to replace the sub-floor and in the mean time, we installed a simple, super cheap vinyl sheet flooring as a holding place for tile (someday).  But it looks clean and is solid, so I am happy with it.

That brings you up to date for the current project, and for this we are focusing on the vanity wall.

First, we have been working on the vanity.   Overall the vanity is a long approx. 8 foot custom built piece, with 4 large drawers and 2 large cabinet areas.  The simple flat design of the vanity, I actually really like!  Right on down to the original 60’s  hardware.  Which meant we decided to keep those features (someday we will refinish the finish on the wood, but not this go round)   The main update that needed to be made, was reinstalling the doors.  When we first bought the house, the doors to the vanity were just sitting on the shelf, and there they have stayed for the past year.  Just to remind you, this is our only functioning bathroom for four people!  So, we pretty much have all of our toiletries in this space, with no doors to hide the madness that has lived in the vanity.  That needed to change!! 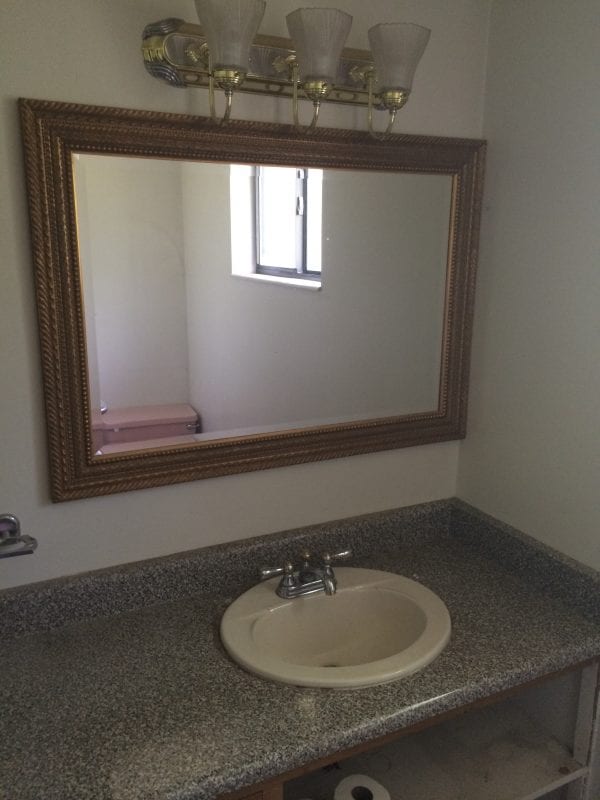 The first major change we decided to make is the fixing the counter tops and sinks.  The counter top was actually relatively new (within the last 10 years), and in very good shape.  We probably could have worked around the faux granite Formica, but the real kicker was the alabaster sinks.  I want bright, light and white in this space.  The sinks just ultimately couldn’t be ignored.  We decided to make this our big splurge and ordered new quartz counter tops. 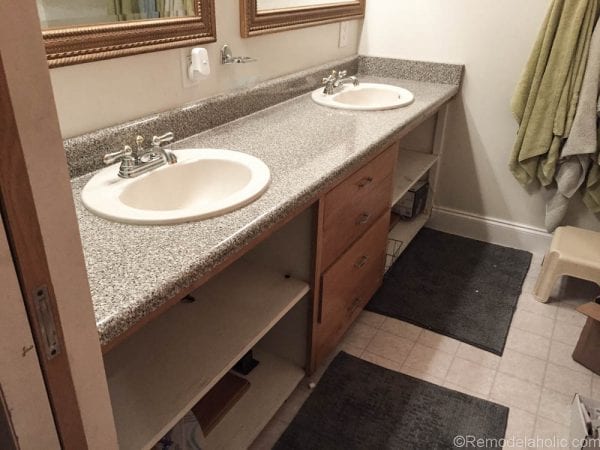 We called the company that installed our kitchen counters, and bought a remnant of Hanstone, Bianco Canvas (over the phone)  I know, a little crazy!  But I looked it up on pinterest and felt happy with the look of the photos with that quartz in it and we had a deadline, so we went with it. 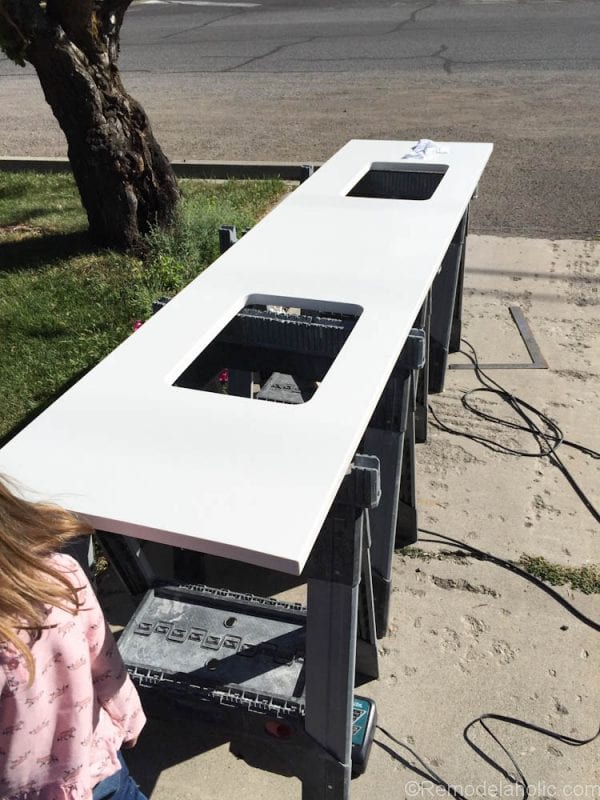 We had a bit of a fiasco replacing the 60 year old valves under the sink… and it involves my office, our brand new computer, and water gushing from the valve…  right into the basement below the bathroom!  Luckily, we avoided any heartbreaking problems, but it was a BIG mess!  YIKES!

We decided to pay the extra hundred dollars for them to come remove the existing counters and sinks.  Why does that feel like pampering myself having someone else remove an old counter?  (I really need to get a pedicure and massage more often so I know what normal people think is pampering!) 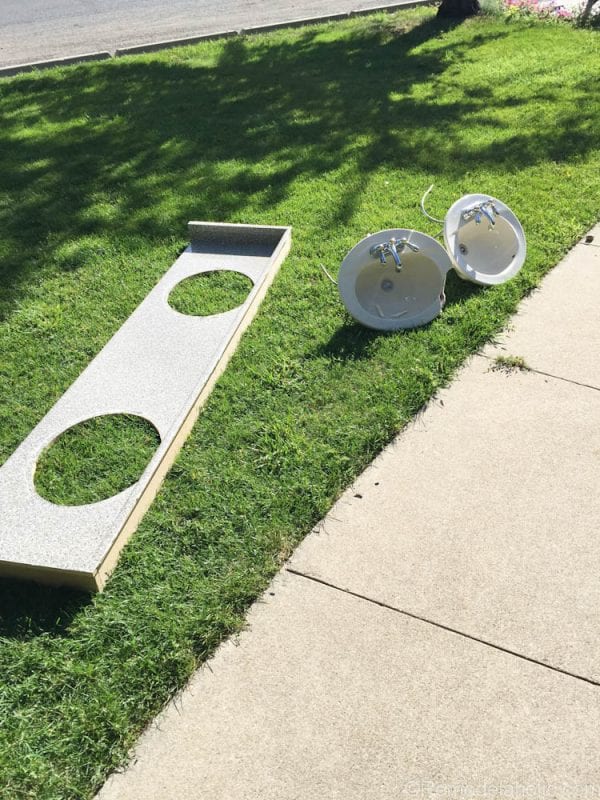 Basically in about an hour we had a new counter and a WHOLE new feeling in our bathroom.  I am telling you it was light and bright in an instant.

I wanted square, under mount sinks, and am so happy with my choice. 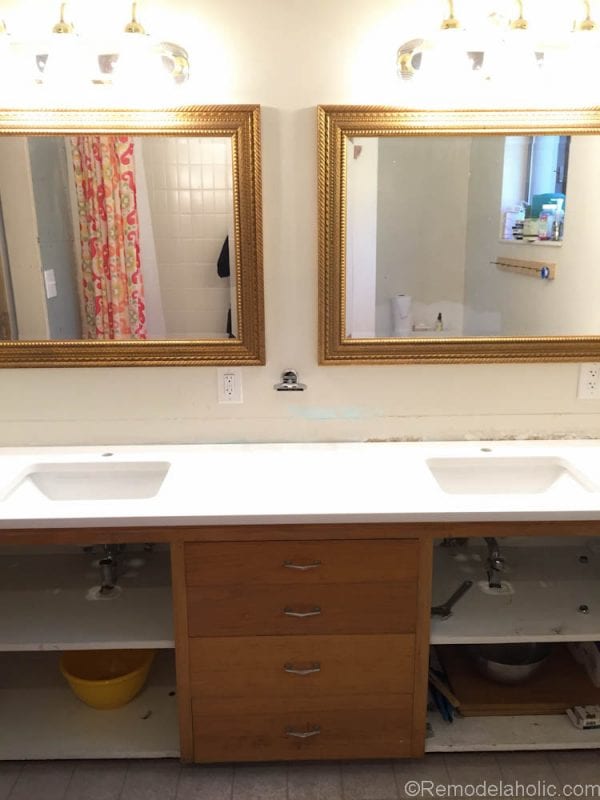 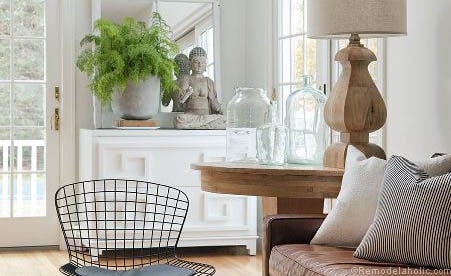 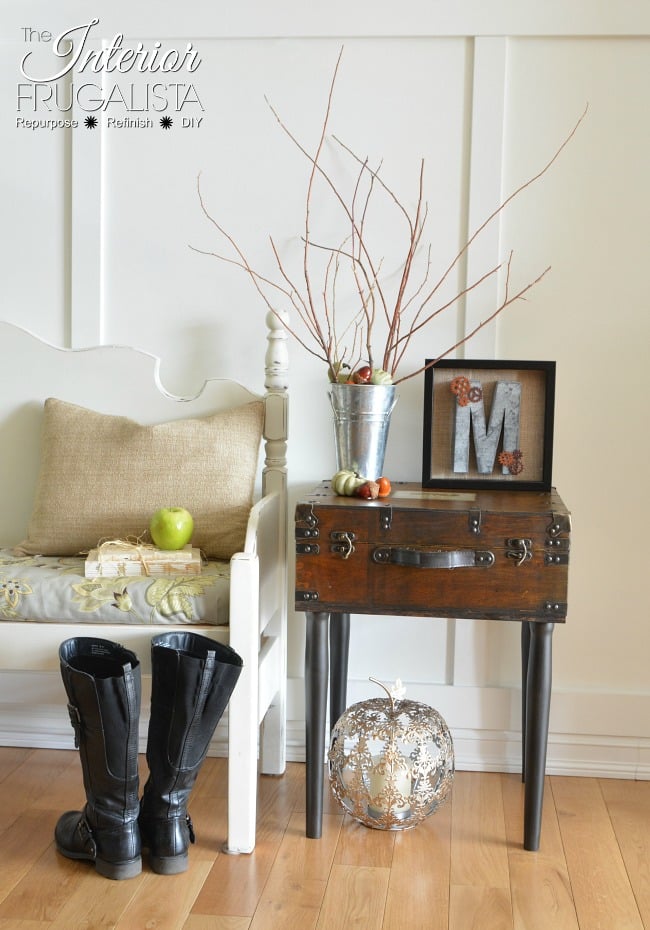 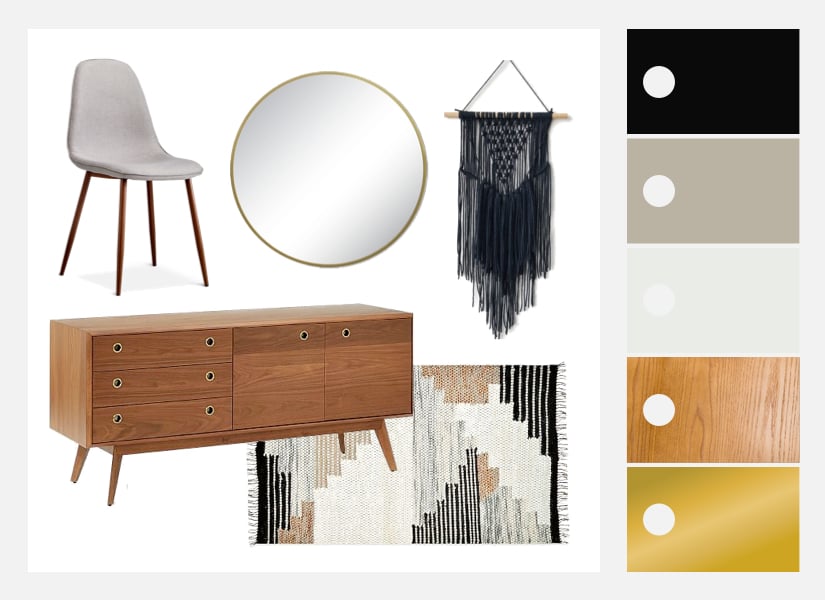 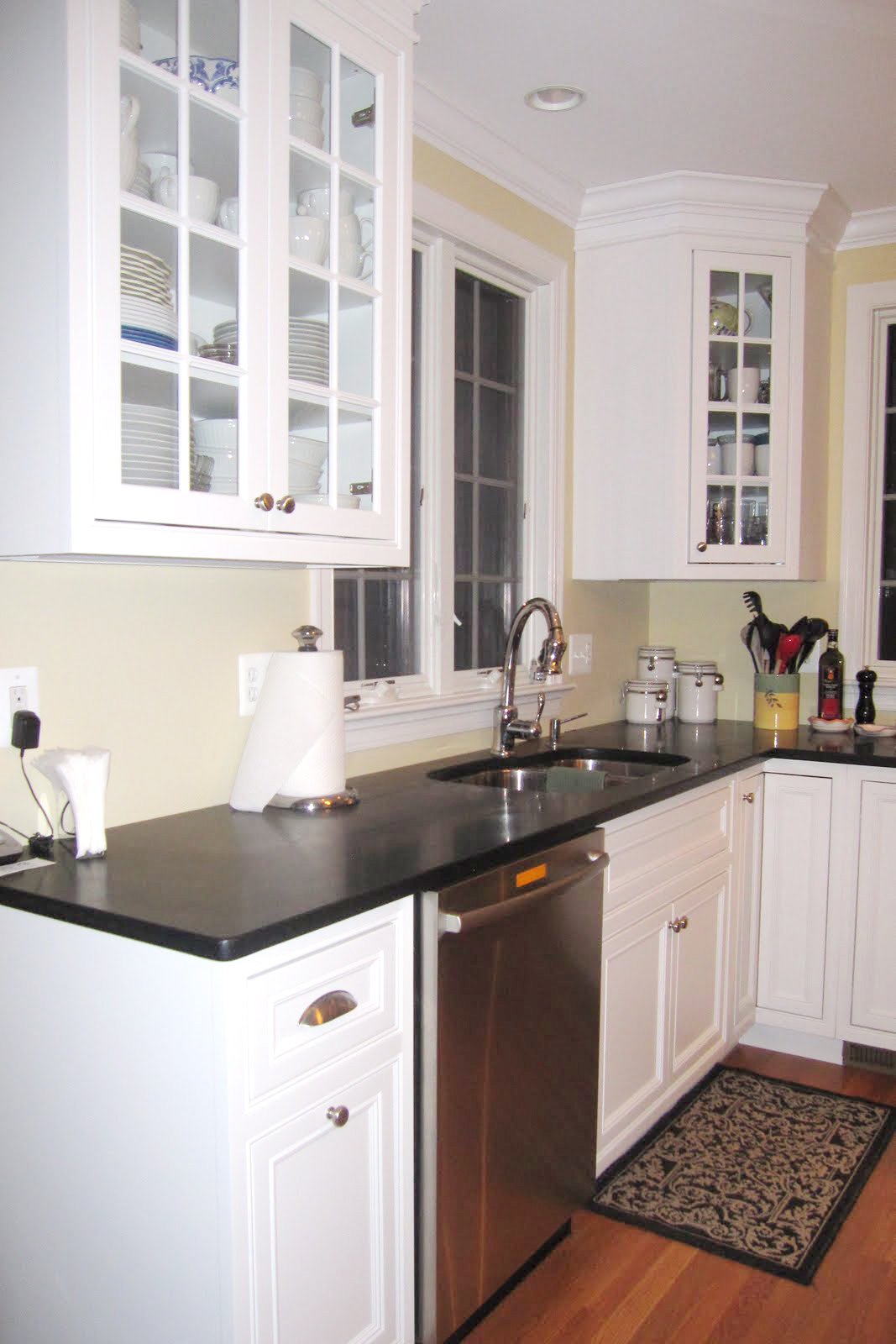 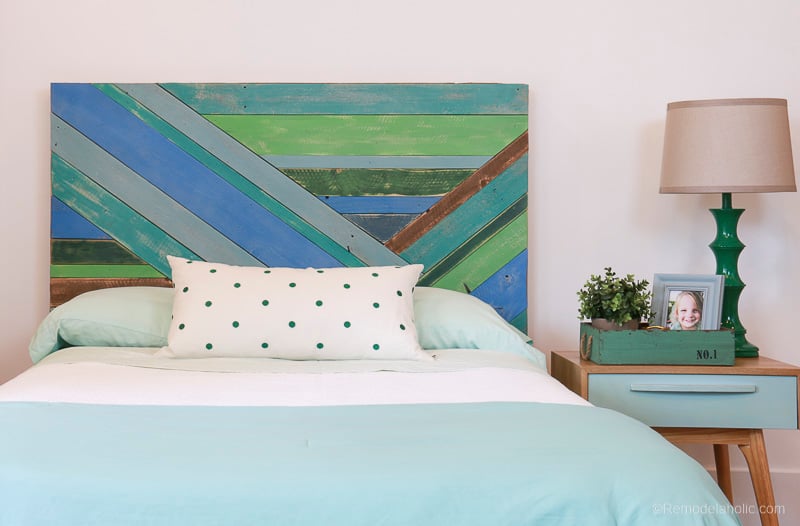