Skip to content
A Recycled Backyard Chicken Coop
Submitted by Simple Home Loving
Okay!  Names have been chosen by you awesome readers after a quicky 24-hour name voting session (sorry if you missed it!), and we have officially completed stage 1 of the coop-build. Here goes…Step one: Demolish.

Remember this giant pile of junk in our future chicken coop?  On Mother’s Day, Mike completely destroyed it with the giddiness of a school boy (fave line of the afternoon: “Hey Love, wanna see me chuck a brick??!?!”). 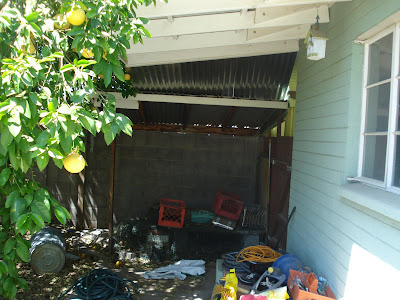 I didn’t get a picture of it all cleared out (DOH), but imagine this space- except with nothing in it.  There ya go 🙂

With these two items that had been left behind by the previous owner of the house, by my super intelligent and creative husband’s design (he told me to make him sound good), we were going to build the nesting place. 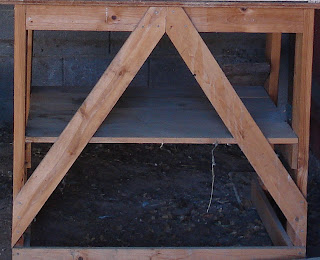 I know what you’re thinking.  No way are you gonna build a coop out of an old armoire and a crappy work table, Emily D.  No.  Way.

This is how it happened. 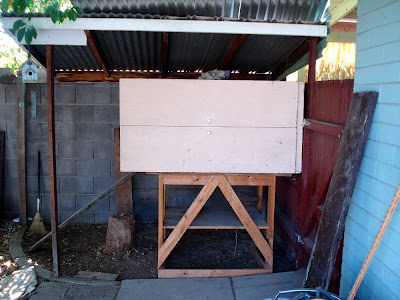 First, we ripped off the back of this armoire to  expose the four shelves, which would act as dividers between the laying baskets where the hens will lay eggs. 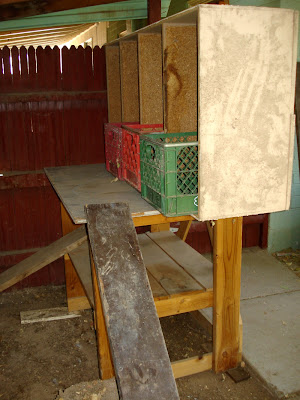 We are using “milk crate” baskets as their laying spaces, as seen on several other blogs and coops.  We are also going to build some ramps to the higher levels (hence the random wood propped up on the table). 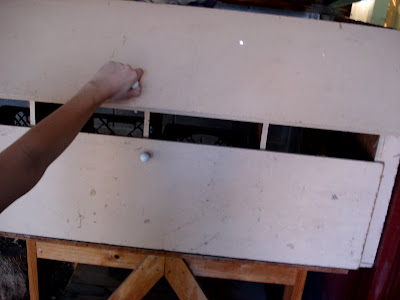 And this is what I love about this armoire re-purpose.  Most chicken coops have to have circular doors drilled out of them to open and reach in to get the eggs.  This was going to be a lot of work for a couple of inexperienced wood-workers, so Mike came up with this instead!  Just nail the bottom door shut and remove the handle, lift up the top “hatch” (the other door)  and reach in for the eggs.  Easy peasy. 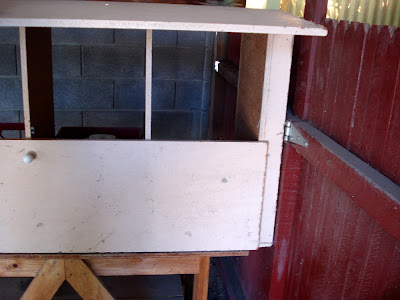 You can’t see it here, but there is even a latch attached at the top of the coop to hold up the door (its heavy!) so you don’t have to wear out your arms holding that thing up.  Plus it’ll probably be much dirtier once there are chickens next to it all the time- not fun to touch.  So perfect!

We are still building the door frame to the coop, and we won’t put up the chicken wire or lay down the hay until that is done.  But in the mean time, I couldn’t help but move on to step 3- my favorite step.

We painted it all ourselves, and I hand painted all of the signs!!!  LOVE IT. 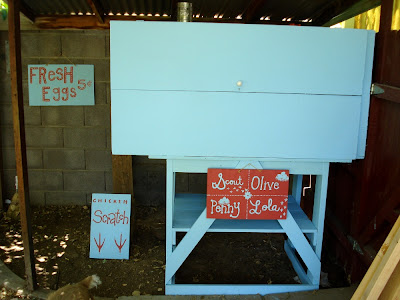 Want a closer look at those names you guys gave to my chickies??? 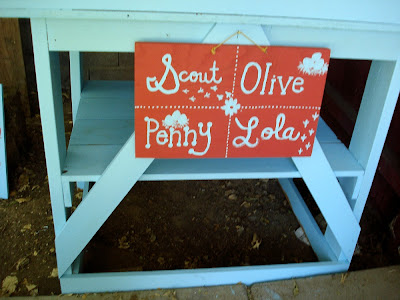 Love them!  You guys have such good taste!  That must be why you read my blog.  Ahem… if I do say so myself.  😉 Thanks for giving them such great names! Mike wanted me to make something to prop up against this tree stump that is forever rooted into the ground.  I figure the chickens will probably use it as a scratching post, thus the “Chicken Scratch.” 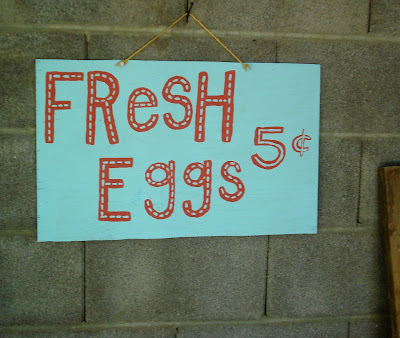 I really wanted a cutsie sign in here too 🙂  We will be selling our eggs for more than five cents.  Haha.  False advertising, I know… but it’s cute, right???

This took hours and hours of hard, back breaking work, but we are really proud of it!!!  We were just talking last night about how much fun it is to put in the work of manual labor and then get what you were hoping for out of it.  So worth it, and so fulfilling!  And we are really excited to start getting eggs.  Such a cool concept- taking care of an animal who also takes care of you!  Hooray, chickens! 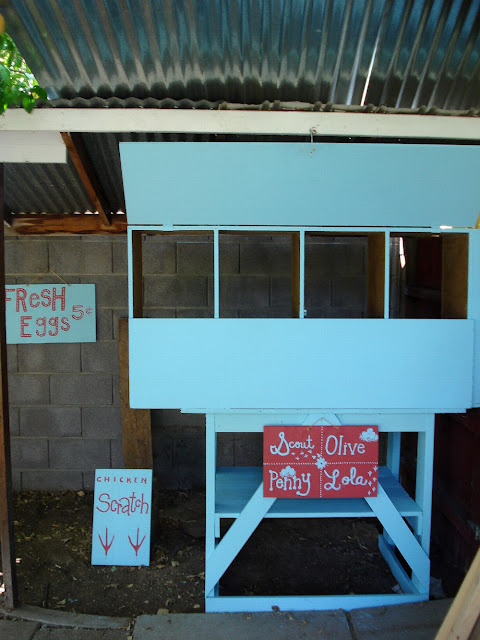 This project was contributed by one of our fabulous readers! We love to share your projects with this great blogging community. So, if you have projects from kitchen renovation ideas to small bathroom remodels, overhauled and repurposed furniture, spray paint updates you name it please send it in! Thanks for reading Remodelaholic!
Other cute coops and outside ideas:
Fly the Coop
Beautiful Water Wise Backyard
Backyard Overhaul With New Landscape, Patio and Furniture
Backyard Beauty; Deck Makeover Galore! Guest
The Great Outdoors: Garden Style
Remodelaholic is a participant in the Amazon Services LLC Associates Program, an affiliate advertising program designed to provide a means for sites to earn advertising fees by advertising and linking to amazon.com. Please see our full disclosure here. 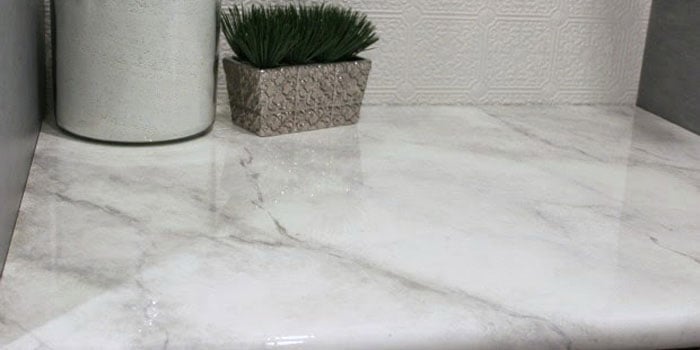 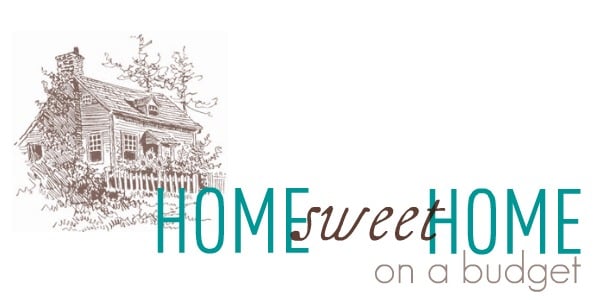 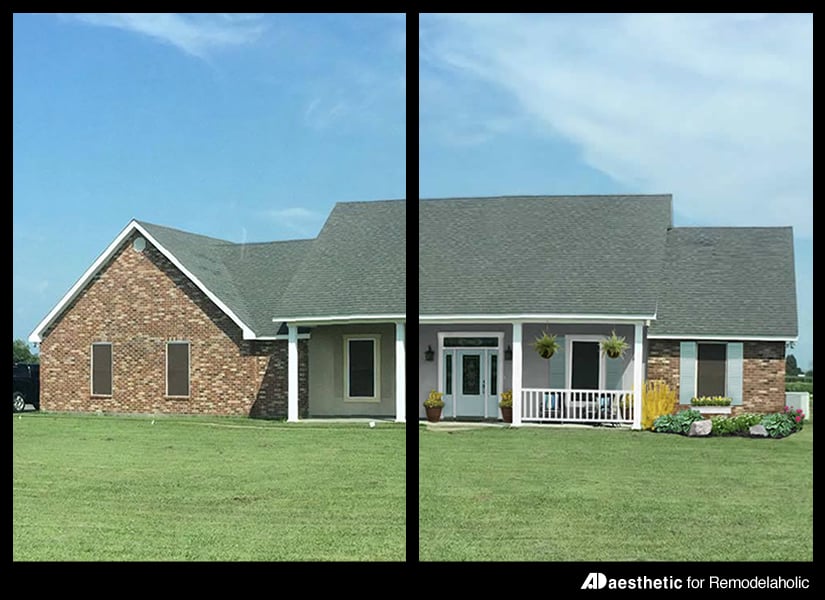 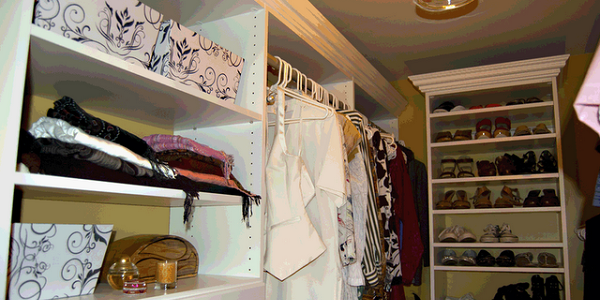 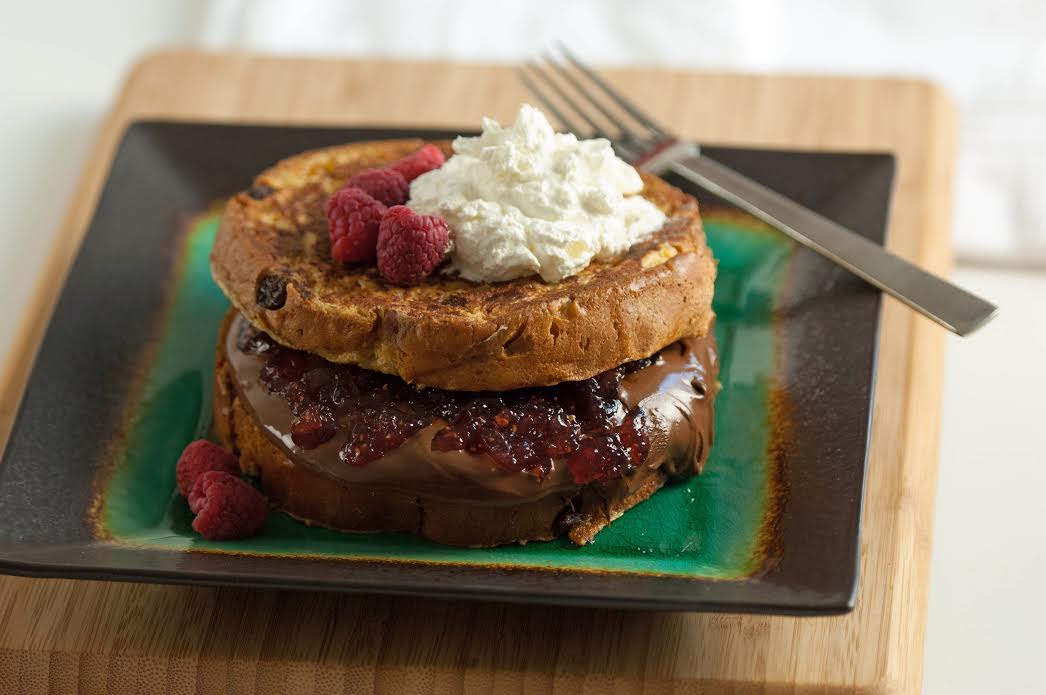 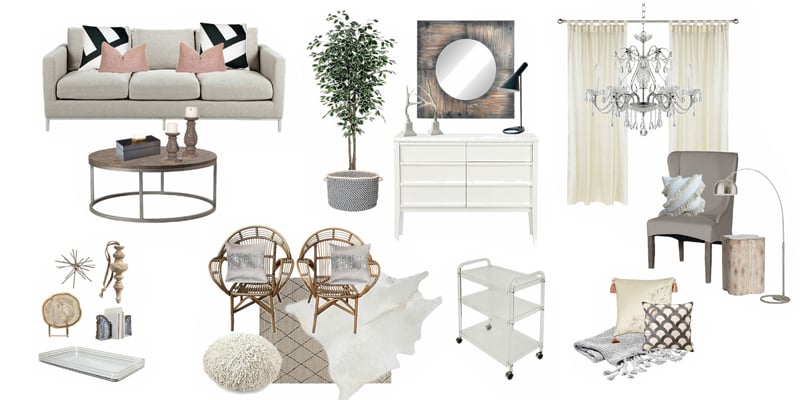