These beauties, were not always as great until Laura over at Laura Thoughts remade them.  Now look how great they are!


The gift has been given so I can now show you all the chairs I re-finished.  I’m so excited about how they turned out!

I went to Value Village for a cheap sheet I could use as a painting drop cloth, that was it.  I wandered over to the furniture (of course) and came upon two tall bar chairs.  They were $10 each and in great shape, I happened to have a sister-in-law with a new house, a bar in the kitchen and a birthday coming up.  It was too perfect so I grabbed them both and barely squeezed them into my car. 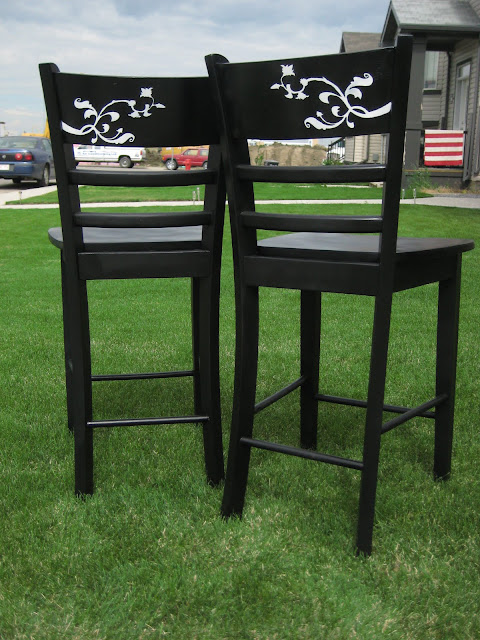 Now for the details.
They started out like this, they look fine as is but nothing special. 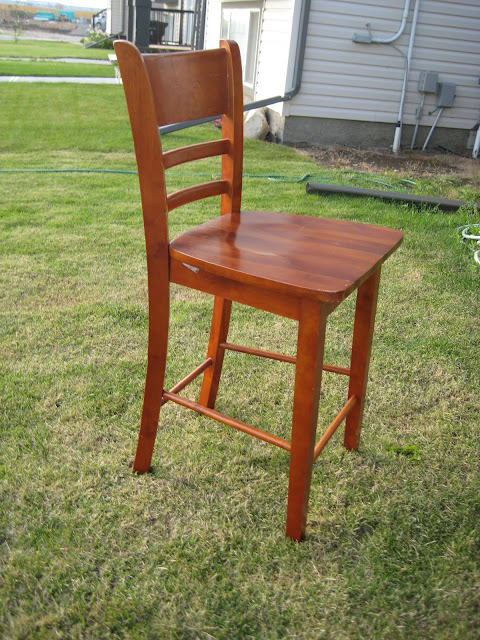 And then I got to work sanding.  I can freely admit that I got a little carried away and they didn’t need to be sanded quite this well.  Isn’t that a lovely sheet they’re sitting on?  That’s the item I went to pick up in the first place. 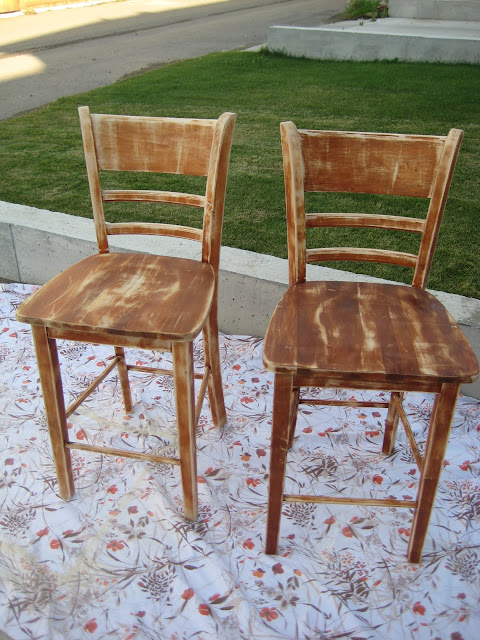 Once sanded I wiped them down really well with first a dry cloth and then a damp one.  I then primed them with a paint brush and primed again.  Many times I wished I was using a spray primer but they’re just too expensive.  Sadly, these days I have far more time than money. 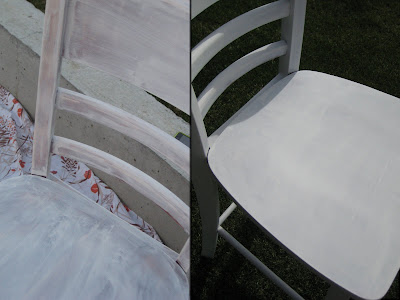 I sanded with really fine sand paper here to get rid of any imperfections and then I spray painted them a matte black.  I used 3 cans of spray paint, it always seems to take more than you expect.

Classy hey?  I could have put on a clear coat and called them finished but I had stencil plans.
I found a picture I liked online and used PowerPoint to stretch it to the size I wanted.  Then I printed it off.  You can see the picture is all pixelized because I blew it up much bigger than the original.  I knew the pixels wouldn’t matter though. 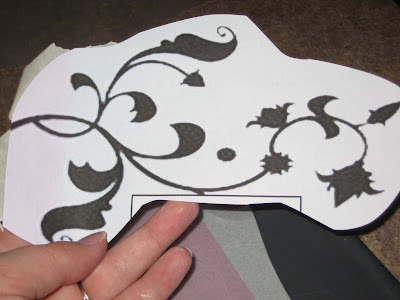 I picked up a really cheap folder at the Dollar Store making sure it was see through.  I taped my design to the underside of the folder 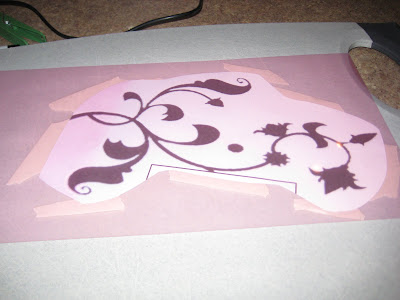 And then using an exacto knife I carefully cut out all the black parts (except the one circle, I didn’t want it).  I lengthened the stem just a bit as well. 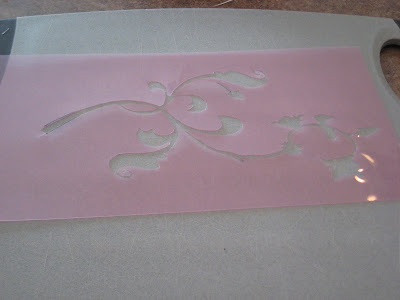 I then used spray adhesive, following the directions for a temporary bond.  I stuck my stencil to the chair (not quite fast enough as you’ll see later down).  The green painters tape is protecting the side of the chair so I didn’t get paint on it. 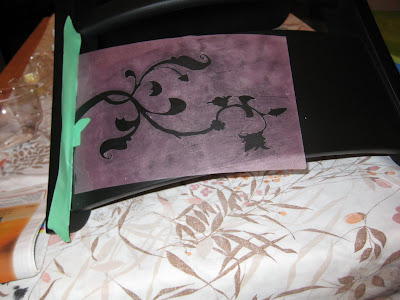 You can see my stencil supplies here 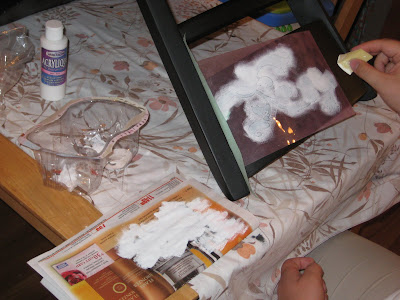 Cheap Dollar Store white acrylic paint, a plastic “bowl” (it’s really part of a plastic package that one of Catie’s toys came in), newspaper to blot excess paint and a make up sponge.  I made a special trip to two different stores looking for a real stencil brush but then realized spending $10 was ridiculous when I have a ton of make-up sponges hanging around.  It worked like a charm.

If you’ve never stenciled before here’s my real quick guide… pour some paint in your container and dip your sponge in gently so you just cover the entire surface.  Then take your sponge and blot off just about all of your paint, too much causes seepage under your stencil.  Then using gentle up and down movements press your paint onto the stencil.  I did two coats and then took off the stencil when the paint was still wet.  Because of the width of my stencil and the flimsyness of it this was absolutely a two person job.  My husband was awesome at helping me put on and take off the stenil, I would have had a really hard time doing it on my own. 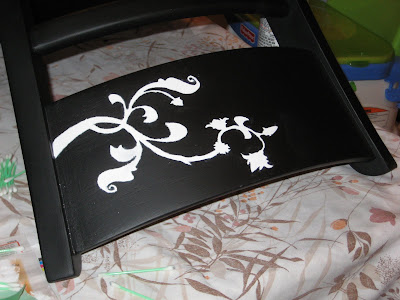 I actually had quite a bit of paint seep underneath the stencil, I suspect my plastic folder wasn’t super effective, either that or I used too much paint.  Rather than sand off the design, repainting it black and starting again I used Q-tips to carefully go around the entire stencil cleaning up my mess.  If you look real close you can tell my lines aren’t very crisp but otherwise it just looks amazing.  I also found that my stencil pulled off my black paint in a few very small places.  I had painted them earlier that morning so I’m sure they hadn’t had time to properly harden.  I grabbed a plastic, disposable cup and my spray paint can and went out side where I sprayed just enough paint into my cup to make a little puddle.  Then I quickly came back inside, dipped a Q-tip in the puddle and covered up the exposed primer where the black had pulled off.  Once it dried you couldn’t even see where the spots where.

So then I washed the stencil (3 Times!  That adhesive is strong), flipped it over and did the other chair the same way (my second chair seeped even worse).  Having a second stencil would have helped because the little parts really didn’t stick great the second time but that would have meant I had to cut out another one.  I’m wondering if a thinner, less stiff plastic would have helped too.

To finish them up I took both chairs outside and covered them in two coats of spray Varathane, 3 in the really heavyily used areas. 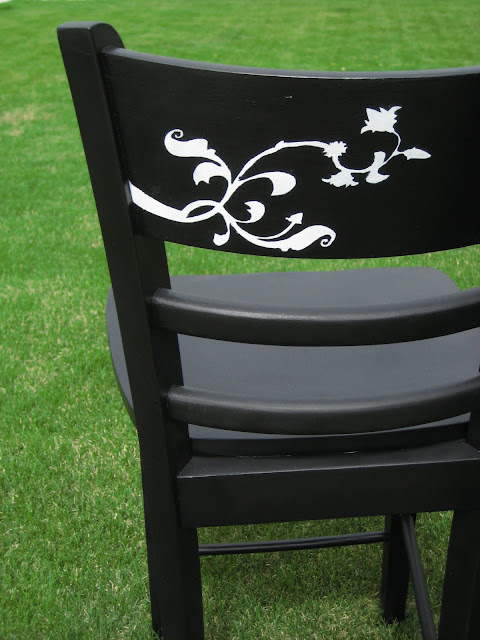 I’m so pleased with the look and Renee loved them! 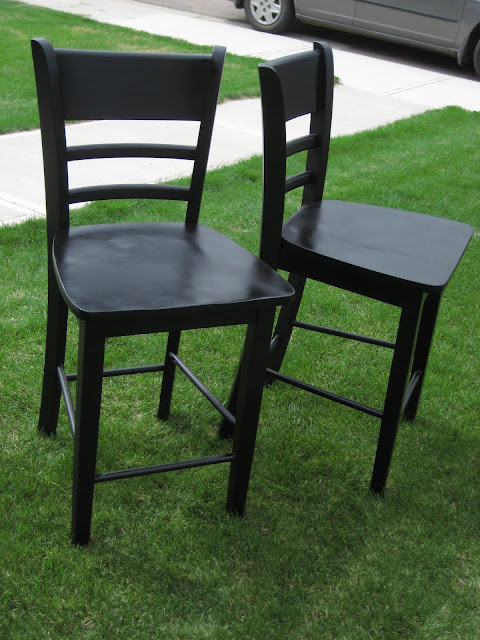 I especially love the interest and detail the stencil gives to them! 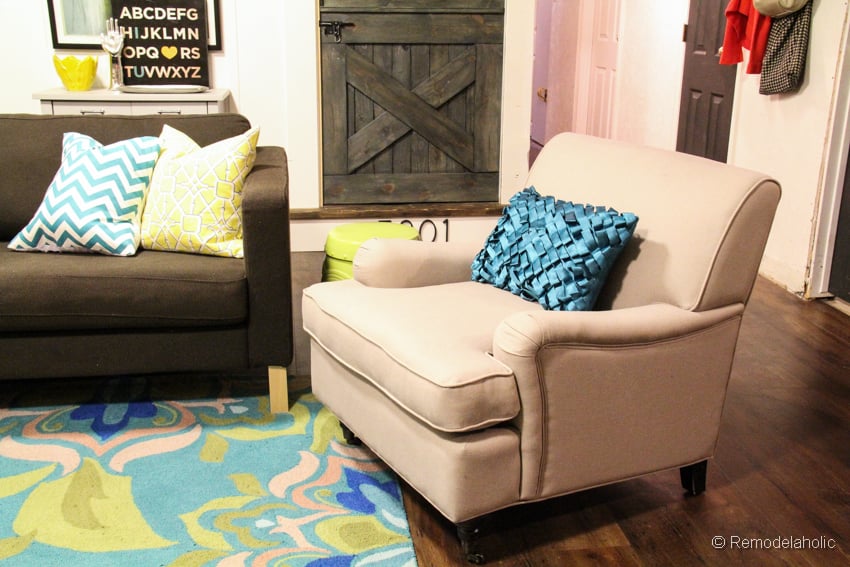 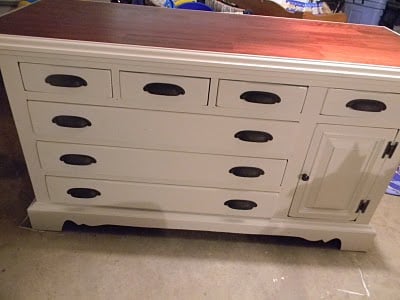 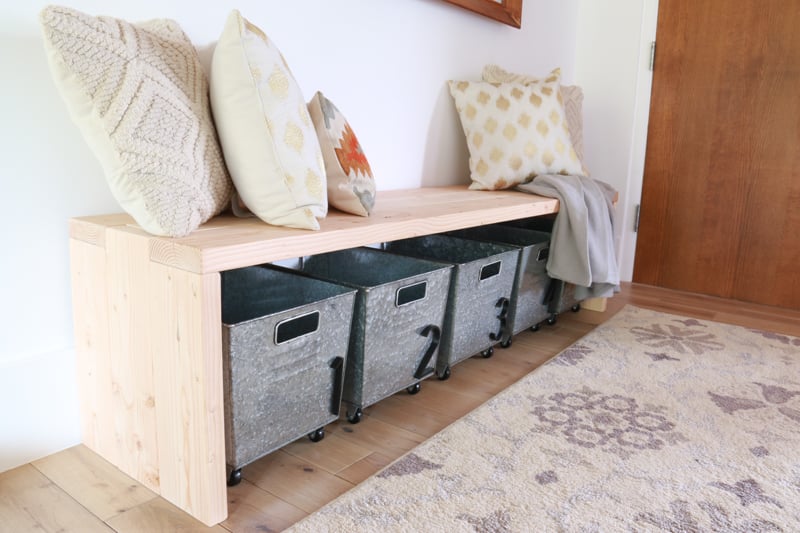