When I saw this boys bedroom transformation I was so impressed that I had to beg them to let me feature it, so you all could enjoy Ellie’s Magnificent (no lesser word can describe it!) makeover for her son on her blog Less Cake {More Frosting}.  The story of how it all happened is fun too!  Check it out I dare you not to be completely in awe:

When my son was born, 8 years ago, we had a new house….no money….and a brother-in-law living in his nursery. It was a stressful time. We got the brother-in-law moved into the basement, but that didn’t fix the no money issue. I had decided on a “primary colors” theme for the nursery. Then, I decided to make really cheap artwork of some of my favorite characters and hang it throughout the nursery. I was actually pretty proud of it at the time.

Fast forward to his 3rd birthday, when we moved him into a “big boy” bed. My talented brother helped my husband and I build a REALLY awesome bed complete with giant shelving and lighted headboard.

I thought, at the time, that I’d change the bedroom into a “buzz lightyear” palette of lime and navy. So I painted the bed those colors, and made a duvet cover and curtains to match. However, we soon learned that my son couldn’t handle the disposal of ALL of his favorite things. He pretty much lost it over the bed switch. And the thought of losing all his treasured pictures was just too much for him.

Soon after that we had some even bigger financial difficulties, and the addition of another child. Poor kid had to continue living in his eclectic and not cool bedroom.

He’s was about to turn 8 in this awful room, and that’s when it hit me. We’d have to get rid of him to make a smooth transition. Not permanently. Just for the makeover. Then he’d be more apt to deal with the changes. My sweet Mom hopped on board to watch him so we could make an

I asked my husband to snap some “before” pictures while I delivered my son to Grandma’s house. So there aren’t very many (he’s not the photographer in the family) but it’s a pretty drastic change, so I want to show you the “BEFORE” first. 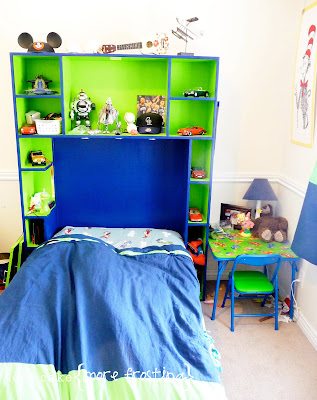 Here’s the bed area. Not sure what’s under those covers…..eek! It’s a mish-mosh of all his favorite toys, and treasures, and, let’s be honest, CRAP! The kid keeps everything!

The white basket in the upper left is the “crap box”. Full of rocks, and plastic kids meal toys, and who knows what else. It’s our compromise. When it’s full….he’s required to edit. 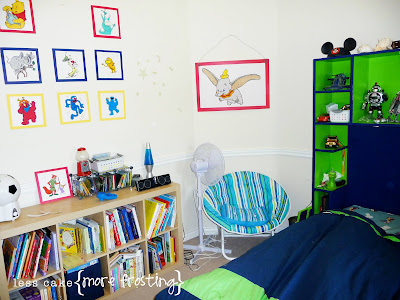 Here’s the giant bookshelf, and a better shot of some of the “foam-core” art. I actually couldn’t get rid of it quite yet. I think it might be making it’s home in our playroom. After all, it is all of my favorites….Sesame Street, Dr. Seuss, and Disney. (it’s the Reluctant Dragon for heavens sakes!) 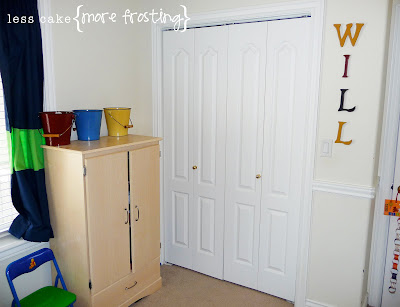 Here’s a great shot of the mix of the Primary Colors and the Buzz Lightyear palettes. CRASH! Neither one was ever executed correctly. (And I’m SOOOO sad we don’t have an “inside the closet” before picture. Because we really did a lot of stuff in there…. But just imagine that it was A DISASTER!!) 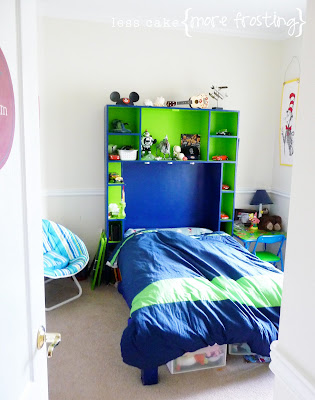 Here’s what it looked like when you opened his door. This bedroom was cramped, and ugly, and a mess. Not okay for a little boy who’s just turning 8 years old. 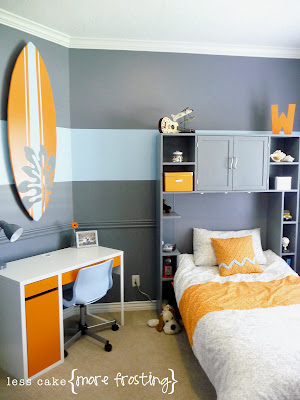 He loves it too. It took his breath away for a second. He’s slowly realizing some of the things that are “missing”. But overall, he’s a happy camper. And I kind of want to move in there myself!

It’s kind of Pottery Barn Kids/Teen (see how they use storage in the headboard?) meets IKEA modern, meets the ocean. And I think they get along GREAT!! Should we take a more detailed tour? 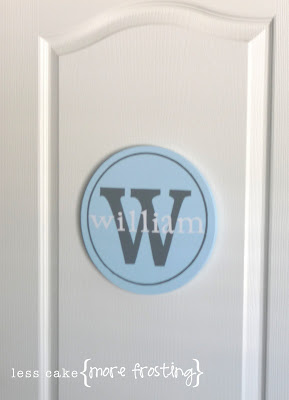 We wanted a modern/surfer theme. It was a color palette that my son had agreed to liking. Originally we had toyed with super-heros and other things that he’s really interested in. But we decided to just pick a “color theme” and go from there instead. This certainly wouldn’t be exclusive to surfing. So we feel it could grow with him. Or even change to a new child, if that’s ever necessary. 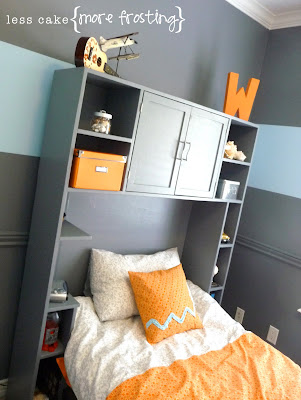 The bed, although super awesome for storage, is HUGE. So it had to stay where it was located. However, we decided that painting it the same color as the wall would disguise how ginormous it actually is. And it WORKED! We also painted the chair rail the same color as the wall too. Our whole house has chair-rail and it’s really not our style. We would actually take it out…but it would be SUCH A MESS! This is a good compromise for us.

All of his “special things” are now located in that awesome orange box. So it’s not cluttered anymore. And some others are tucked away behind the doors. (yay doors!!) The other things displayed actually go with either the theme or the colors. And it’s MUCH cleaner now!

The bedding started with an UBER cheap duvet from IKEA. And then I added the orange stripe. I also made the pillow on the bed. It turned out really great. (these pics don’t really do it justice) And the technique is really easy. I have a tutorial coming on the pillow. You’re going to want to make one too! 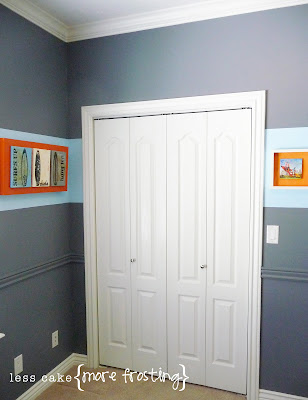 The closet area is so much cleaner now that we got rid of his armoire. I really liked it for baby clothes, but it was nearly impossible for him to keep clean. I wanted drawers. 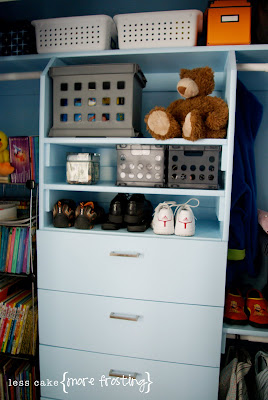 The closet, thanks to my brother….again, now has built in drawers, double rods, and a single rod on the left. (which we actually don’t need, and have stored our books there) The drawers are plenty to store all his “in season” clothes. With any out of season ones being stored in big bins under his bed. The drawers are a little high for him right now. But we just put a little stool in the closet, so he can see all the way to the top. 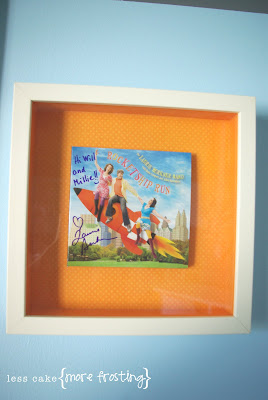 I’ve decided one of the keys to making a room feel both “decorated” and “personalized” is to unite the color palette. So the things that match are on display, the things that don’t are tucked away. But still very accessible. This is an autographed CD that my son has from his favorite Children’s artist Laurie Berkner. (she’s amazing, by the way, both my kids ADORE all her music!!)

Anyway, we’ve had this CD sitting in a plastic bag so that little hands wouldn’t smudge the signature. Now it’s on display for him to admire. Not only is it completely special to him….but it MATCHES perfectly. I have a tutorial on this one too! So easy and simple! 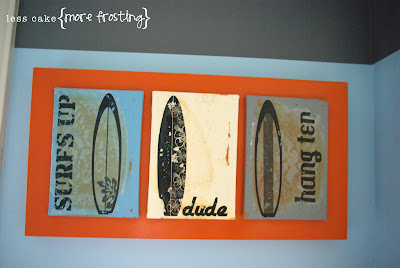 Remember this little number? I made him way back in June! (and there’s a really detailed tutorial HERE) It was finally time to give him a home. And he’s very happy there. Go back up to the whole closet pic to see how he looks on the wall. I just think it makes the room look so surfer. 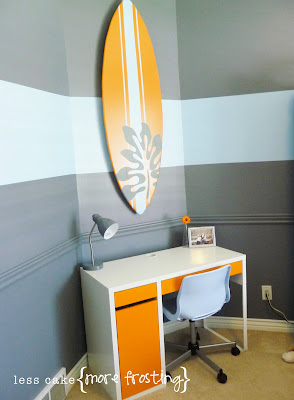 This is my son’s favorite part of the room. He says that, “big kids have desks.” And he’s right. I hope he’ll spend many happy hours doing homework and projects at this desk. I couldn’t believe that IKEA’s new line for 2011 included a desk with orange accents. (and a baby blue desk chair!!) How fortuitous! (that’s your dictionary word for today….now you have to use it in a sentence.)

I was also delighted that Wal-Mart’s college dorm line included gray AND orange. That lamp was a completely happy $5 accident. 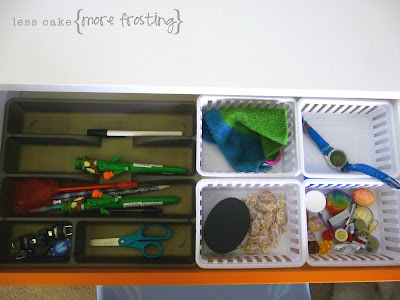 All his little collections have homes in the drawers. He was happy to see that I didn’t dispose of his various fake jewels and rocks. (and I don’t mind them so much….as long as they have a home) 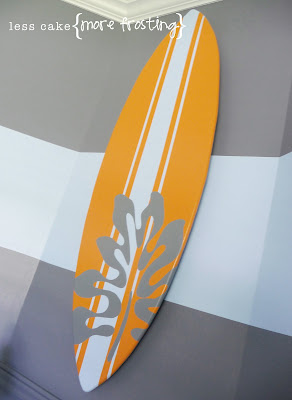 The centerpiece of the WHOLE ROOM is this awesome surf board. It is HUGE! And thanks to the genius of my little brother….it hangs about 3 inches off the wall. So it’s very realistic.

It’s made of some kind of wood. I should probably find out what kind….ooops! I made a template and then we used a saw to cut around the outline. Then we used a router to roll the edges.

We decided to paint it with our orange accent color. And it just pops off the wall! I also tried my hand at vinyl…without any fancy cutters. And guess what? You CAN do it! It would definitely be faster and cleaner with a die cut machine. But if you’re determined…you can do it. And this design wouldn’t be the same without it. Sometimes you just gotta try and see what happens.

One more look at the finished product.

Granted, trying to do this in 5 days was a bit of a stretch. And the resulting massive migraine wasn’t fun. But to have it ALL done, with no input from an 8 year old boy…might have been worth it.

I LOVE the colors!
I LOVE the decor!
Basically I love it all, didn’t she do a fabulous job!?!
Remodelaholic is a participant in the Amazon Services LLC Associates Program, an affiliate advertising program designed to provide a means for sites to earn advertising fees by advertising and linking to amazon.com. Please see our full disclosure here.