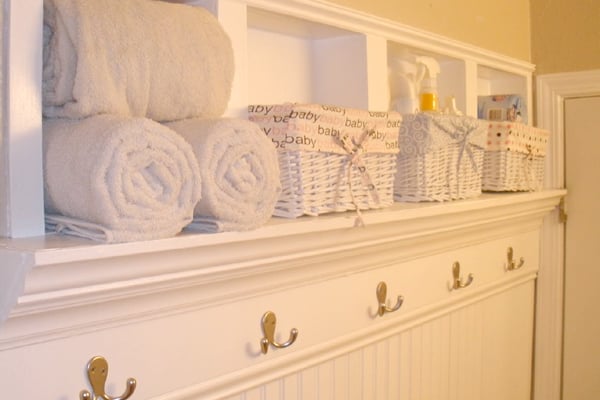 I don’t mind towel bars, but when a small bath is used by 3 people (soon 4), they just don’t provide enough space for towels.

They come in lots of finishes, shapes, and styles; I love them.  So I installed a row of hooks along the molding on top of my new beadboard wall.  Instant bling and lots of places to hang towels.

Now I want a place for some pretty apothecary jars with Q-tips, cotton balls, or whatever… up high enough to be safe from little hands.So I built my own crown molding shelf to top off the wall.

1. Cut crown molding (and 1×4 for the shelf)
I didn’t need to figure out any corners (I’ve had to learn how to miter and cope corners more recently though).  If you are using molding for the ends, you’ll want 45° cuts and mitered corners.  I just made straight (90°) cuts to my molding to fit the length of the wall, with a small piece cut out of the right side to fit around the door frame molding.

2. Get your angles right
Here’s where it gets more complicated.  I need to fit the shelf to the molding.  I didn’t take pics (who knew I’d blog about this 2 months later?)  So I’ll do what I can with this piece of scrap I have left over.  See how the molding is angled 45° from the wall, but then also forms an angle with the 1×4 I used for the shelf top?  I want the 1×4 to fit behind the top lip of the crown molding, but the front of the shelf is flat and the molding is angled… 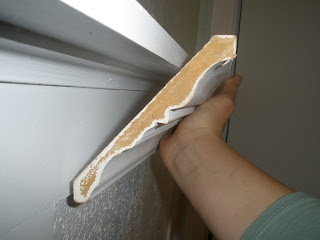 Not possessing a table saw (but I’ll take one if you’re giving one away…), I used a hand plane (love this tool for shaving down a “just a little too wide/long/thick” piece of wood or smoothing a rough one) to impart an angle to the edge of the 1×4.  Yes, it took an hour, but it was a very nice fit afterward.

3. Nail everything to stud (or a furring strip)
A 1×2 furring strip screwed into the studs provided a sturdy support to nail the back of my 1×4 shelf to, and then the crown molding was nailed to the 1×4 (top) and the studs (bottom) with finishing nails.

Finally, I cut a little triangle of wood to fill the space on the left side of the shelf.  (I guess I could have used a mitered joint, but I would still have had to cut part of it to fit around the edge of the shower insert.)  I like this better – nice and smooth.

4. Caulk and paint
I caulked any gaps (small ones between the molding and shelf and wall) and painted it all a nice bright white. A mold-resistant, scrubbable paint that spilled shampoo, hair gel and even toddlers would have to work hard to mess up. 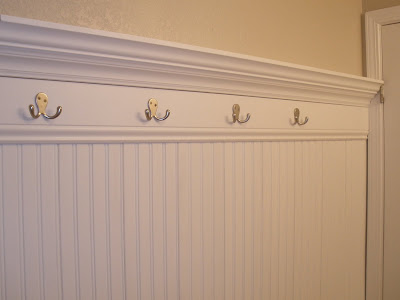 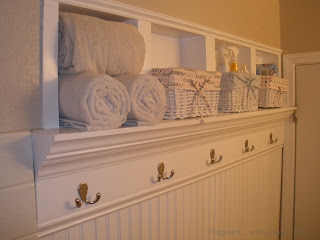 If part 1 was a 1 (in difficulty), then part 3 is definitely a 3, because I built recessed wall cubbbies/niches for storing towels and baskets of bath supplies (and it was tough, but fun).

1. Check for pipes/wiring
I was certain there were no pipes in this wall, but there was electrical cabling (these usually run along a stud), so I made my cuts with a space next to the studs (You can always cut more later, but not vice versa).

2. Cut into the drywall 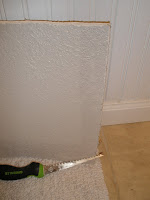 OK. Moment of truth.  My husband, who hates putting nails in the wall, was having conniptions in the next room while I used my drywall saw to cut square rectangles into the wall between the studs.  I made my cubbies 12″ tall and as wide as the studs allowed (usually 15″).  The first “hole” was far from perfect, but “It doesn’t have to be perfect to be beautiful”. (I’m the Nester’s biggest fan, you know.)  My other cubbies got better and better – yeah practice!  No worries either way; I knew I was going to have to frame them out later.

3. Make wooden boxes
I used 1/4″ poplar boards ripped to the depth of the wall niche (~3¾), and cut just a little shorter than the height and width of the hole.  I should’ve used 1/2″ general purpose molding boards, because the 1/4″ poplar was too thin to nail together.  I used wood glue instead and it’s holding up fine (knock on wood).  I also left the backs open (you could use luan or thin plywood to back).

4. Install boxes
If you measured right, they should come out even with the wall surface, sitting on the cut edge of the drywall.  If not, hold on to ’em so they don’t fall into the wall (ha ha, one of  mine almost did).  Then I used finishing nails to nailed them in place. (Should I have used screws? Sturdier, yes, but also harder to hide.  The jury is still out on that one.)  For the box next to the wires, I nailed a 1/2″ piece of wood “spacer” next to the wiring, and put my nail through that into stud (so there’d be no gap).

5. Frame it out
I used plain 1/4″ poplar again (love that stuff) and cut it to the width of the space between the cubbies.  There were some painstaking careful adjustments to get this just right, but I’d say err on the side of too wide if you must.  Just nail these to the studs.  See how they’re even with the top of the cubbies – I also tried really hard to make sure it was all level, because I took a thin piece of chair rail and ran that along the top. 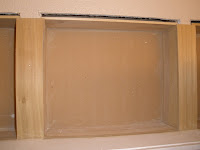 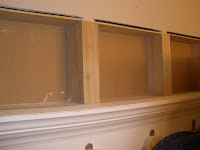 6. Caulk and paint
Lots of caulk (along the back, between the box and shelf, and between the cubby and the frame) and then paint (3 coats).  Then I sat back to enjoy.  Worth the work?  Ummm… heck yes, I love pretty baskets (even if there’s TP in them). 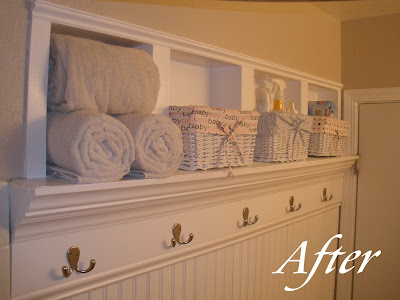 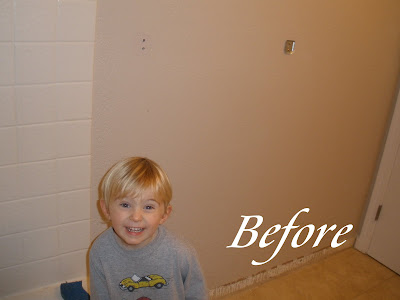 Huge improvement!! I think I can finally say This wall is Done. 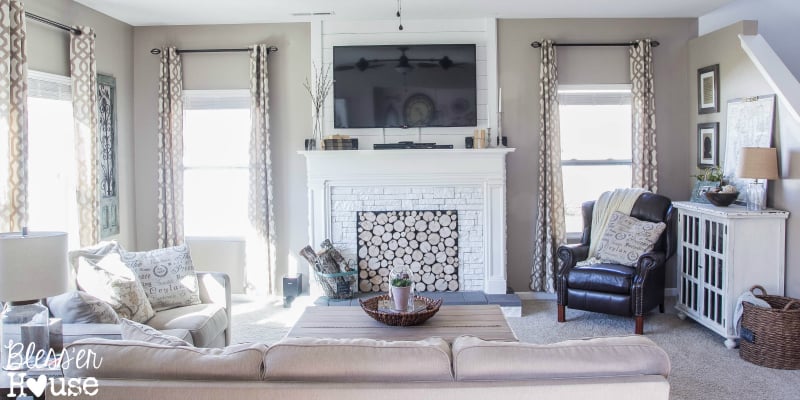 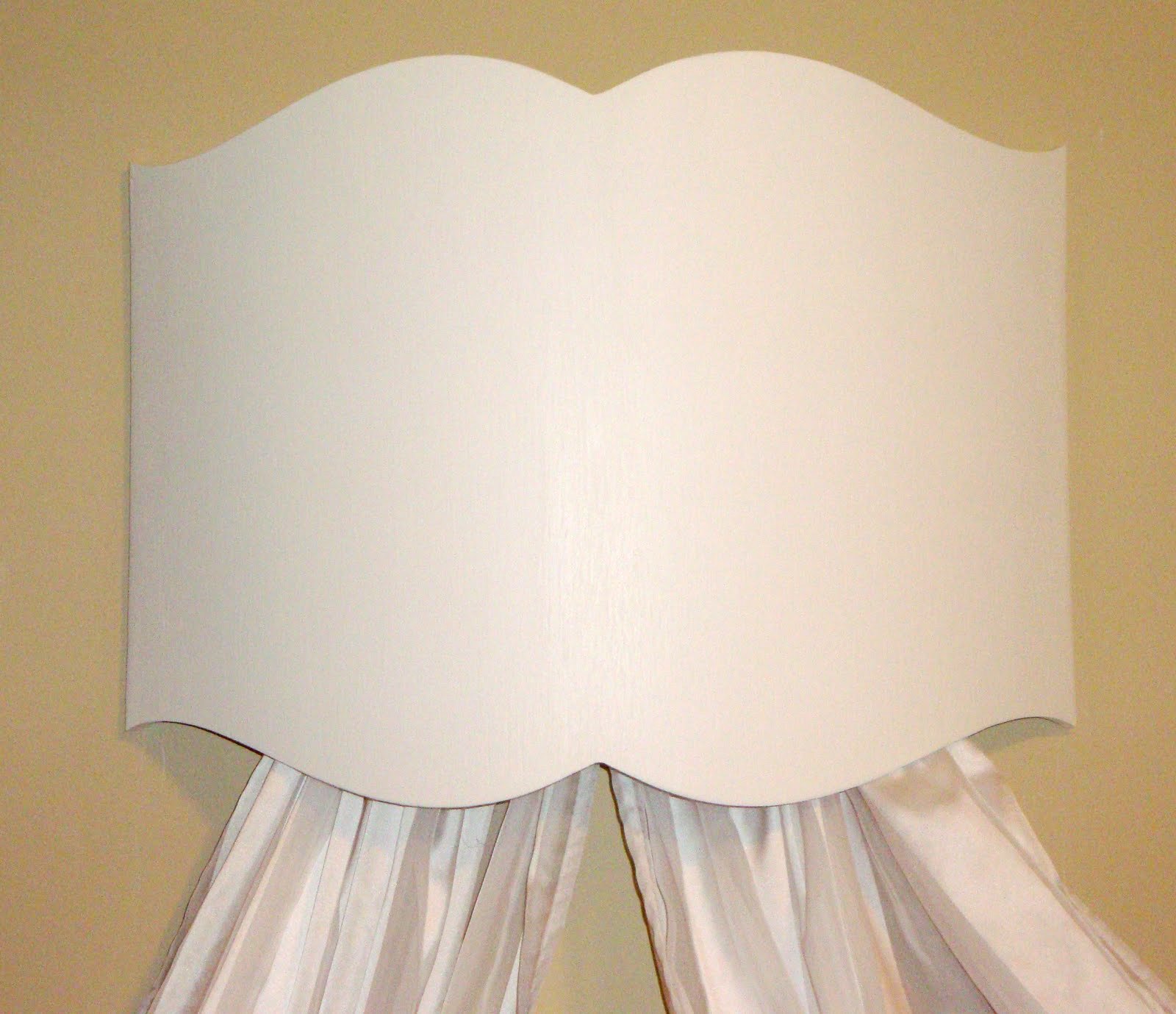 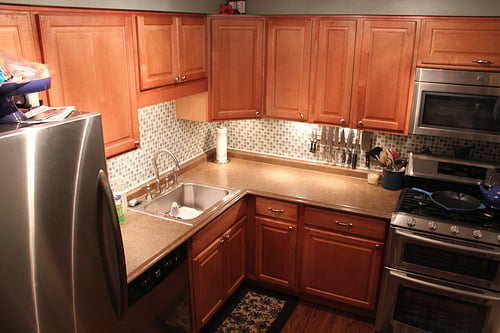 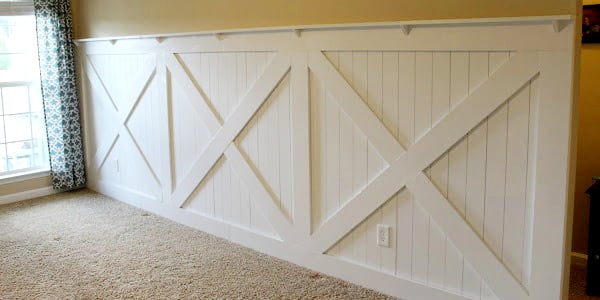