We are very excited to show you the “HUGE” DIY concrete patio project that we took on this year in our backyard.  We decided to attempt to do it ourselves, and this was no small patio.  We wanted to go big or go home.  So, a 450 square feet of patio is what we designed.  It took a lot of time to get the project planned out and even more time prepping  And once we got closer to actually laying the patio, we knew that we had to get some professional help.  Being a DIYer it’s hard to ask for help, but we knew this was too big of a project to completely go solo.

We started by asking friends if they knew any concrete professionals.  Just my luck, a friend of a friend is concrete work on the side of his day job.  (I recommend getting a few references, before going forward with a project especially when working with friends…)

The great news was, that Dallin (our concrete guru) was willing to bring all the tools (besides the mixer which we rented) coach us through the prep work, and teach me while we installed the patio so that I could attempt to do this on my own in the future.  Which was a great experience for future reference!

Here is the first edge that I defined when We built the garden boxes.  We used deck screws and 16″ stakes to hold in this form that the garden boxes sat on.  It drops 7″ from the house, to give 2.9% drop.  We didn’t want any chance of water flooding in the house during a rain storm.  The grade also worked out perfect to match up with the existing lawn area.  (at least in that we got lucky!)

We set rebar stakes in the ground at the center points of the curved walls.  If you mark the sting with tape at the radius point, you just swing it around and paint at that point for a nice smooth curve.

We worked the design around an existing pear tree. 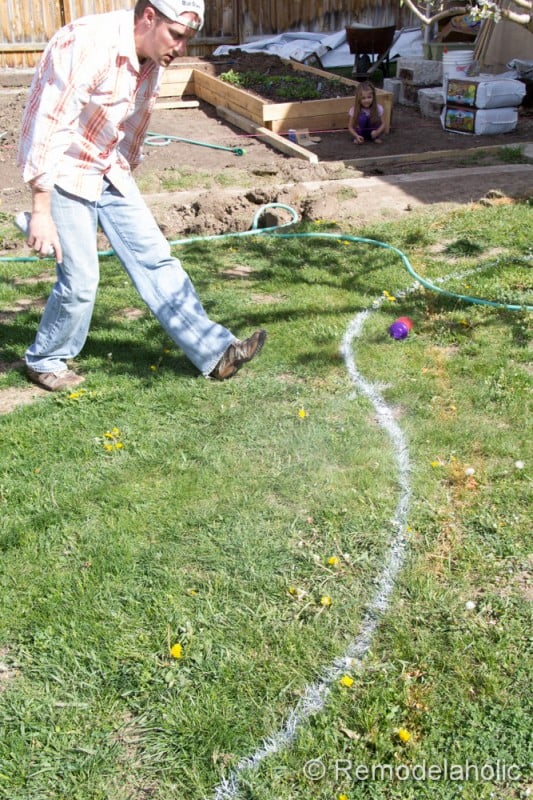 Digging Out the Patio

Once the patio was painted on the ground and the utilities were Blue Staked, we were ready to dig.  We used most of the sod in the area, to patch some bald spots throughout the yard, then we filled in the garden boxes will all the extra soil. 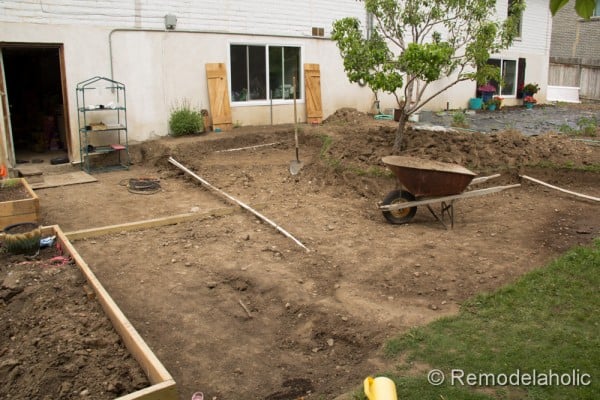 Here is my brother building a small wall to hold our extra soil for the other garden area.  We used the free wood that we got from my uncle when we built the garden boxes.

There was a weird existing footing, from who knows what, that we had to break up and move.  We saved all the pieces to use for walkway of stepping stones some where else in the yard.  Breaking up concrete is a great way to smash out any frustrations.

Here is the garden starting to be filled in and leveled out.

We used a long straight board with a level on top, to level the grade from the side form with the garden boxes.  We didn’t have to do any calculations because it was already done when we set the form.  All we had to do was keep the grade level perpendicular from the form and everything would drain properly. 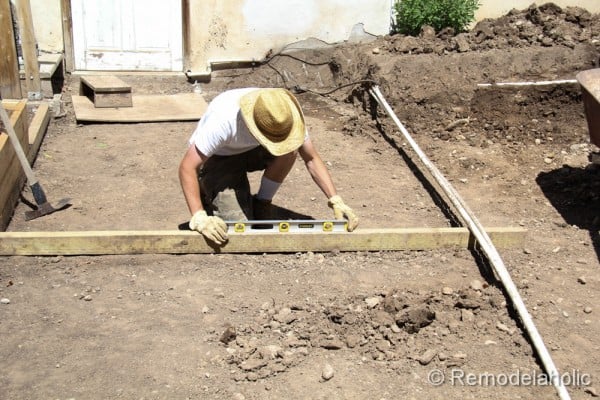 We did run into the sprinkler lines and had to redirect them under the patio in a 4″ sleeve.

Here is the trench that we dug out for a 4″ sleeve.  It was pretty easy digging other than the small planet that I found right in my way.  We decided to keep the boulder so we can do something fun with it in our flower garden.

This is the sleeve being buried and ready for the new sprinkler lines to slide into. 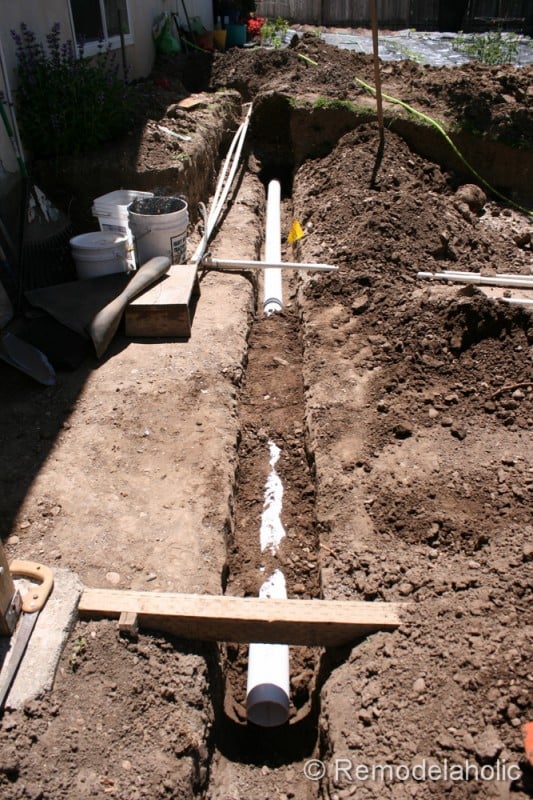 There was a little bit of a challenge when it came to hooking the pipes back up to the right watering zones.  We managed to pull  it off though. 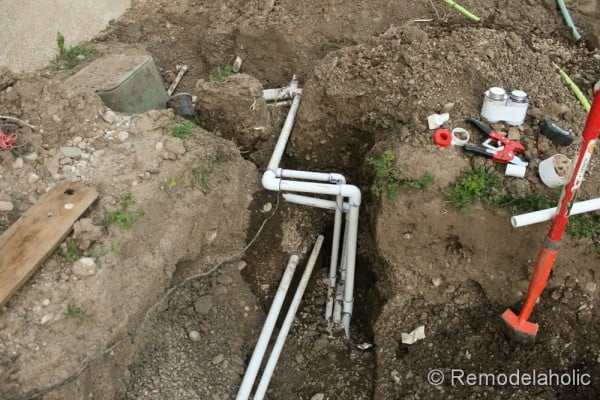 Now that all the sprinkler work was fixed and out of the way, we were able to get the forms in place.  Dallin, my new concrete professional buddy, came over to help set the forms and make sure that the grade was good before we brought in the gravel base.

We weren’t too concerned with the exactness of the radii around this edge, because we knew that the future seat wall from Pavestone was going to cover it up.  If there wasn’t going to be a wall there, we would have taken more care to get the radii to look just right.

When staking a form along a curve you need to have the stakes spaced closer together, to hold the shape of the form.  These were about 12″ on-center. 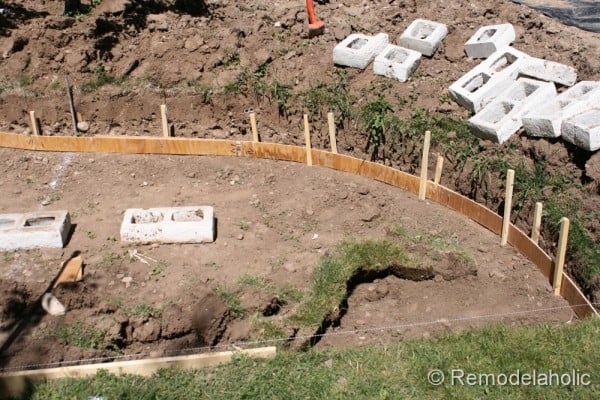 We decided that now was a good time to raise the sprinkler valve box.  It was low to begin with.  Also here is a picture of a sage plant that survived a transplant in the heat.

One thing what worked in our favor was that the new patio will be sitting on the foundation of the house for added support.  So hopefully, the chances of the patio settling away from the house are very slim. 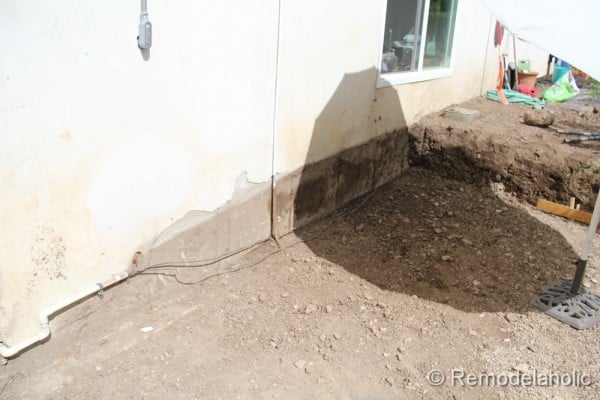 Here is where we started spreading out the gravel.  We purchased 2 yards of pea gravel from a local landscape material company.  It only took about and hour to spread the gravel level across the patio.  It ended up being around 1″-2″ thick.  , Dallin said that it didn’t have to be any deeper than that, because our soil was so hard to begin with.  That was good news because we were running out of places to put the soil. 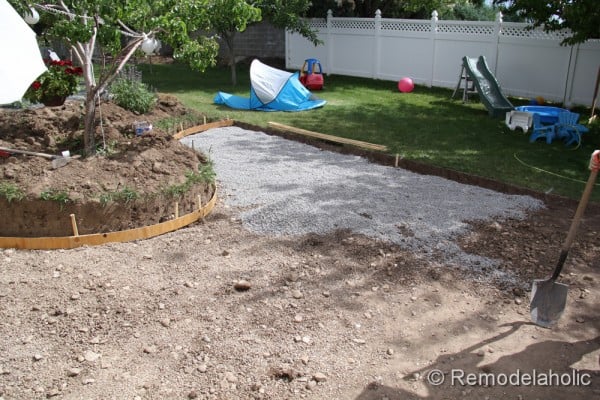 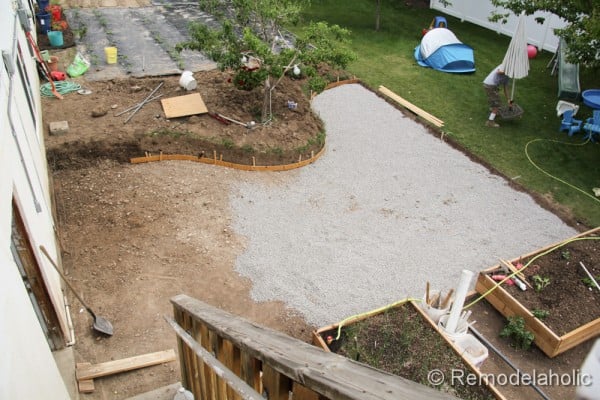 There were just a couple of straight form edges that I had to finish at this point. 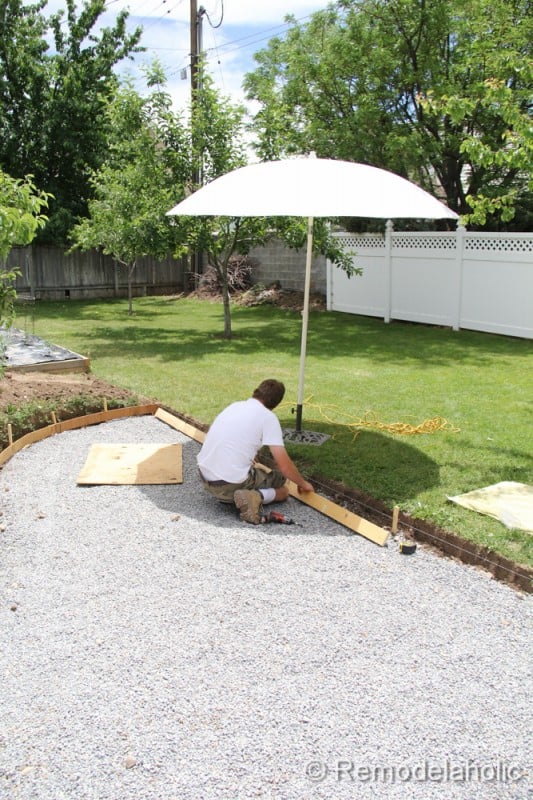 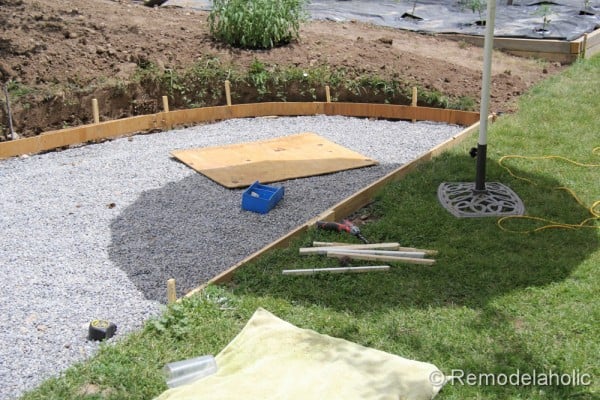 Up against the house we tied into the existing foundation and added a expansion joint between the house and new patio.  The rebar anchors will help keep the patio from sliding away from the house over time. 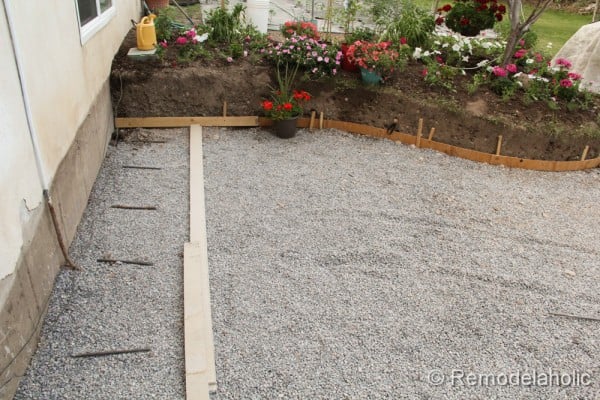 No we were done with the prep work and ready for concrete!

This was an exciting day, when we finally got the concrete delivered.  We used the Quikrete quantity calculator online to figure out how much we would need for our 450 square foot patio.  We were told by Quikrete that it would be best to get 80 lb bags to get the job done. Typically they sell 50 lb bags at the hardware store, but we were able to get the contractor size bags.  They were heavier, but you dealt with less bags.  For the grand total of bags we had 275 bags, delivered on 6 1/2 pallets.  That is a LOT of concrete people! 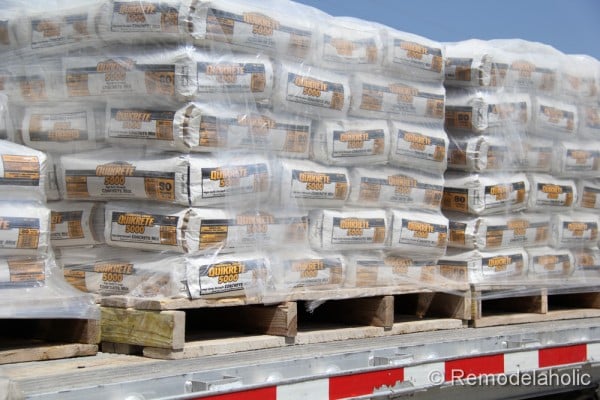 Here I am unloading the truck.  This was my first time using a forklift.  I was a little nervous at first, then I got the hang of it by the last pallet of course.  We had to rent the forklift  ourselves to get it unloaded. 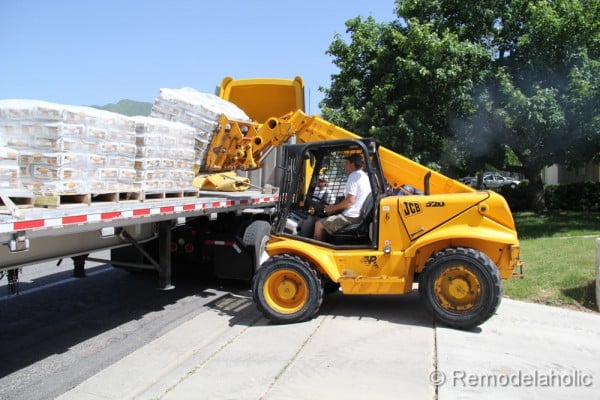 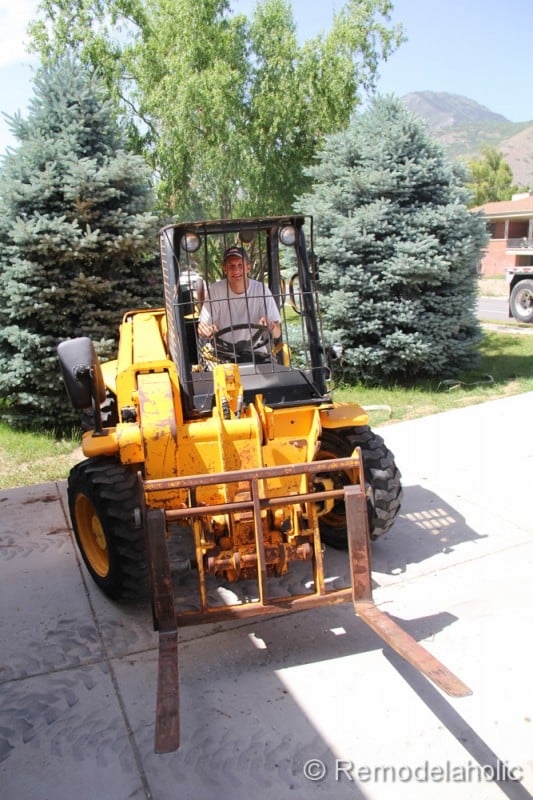 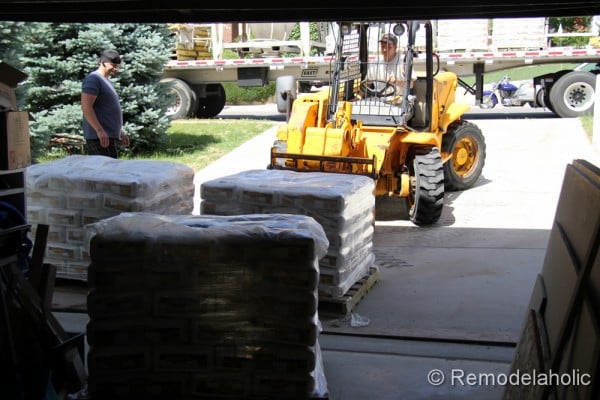 Once they were unloaded on the driveway, we had to carry them to the backyard in wheelbarrows and heavy duty dollies.  It took about an hour with 6 guys.  Not too bad!  We were very grateful for our friends willingness to help us out.  It would have taken me about six hours on my own to do it, and then my back would have been gone, and a patio would never have happened… (p.s. there was not other real access to the backyard, so we couldn’t just forklift it back there!

We placed half of the bags on the grass and half on the gravel.  This way we didn’t have to damage the grass too much with all the weight.  Each pallet weighted over 2000 lbs. 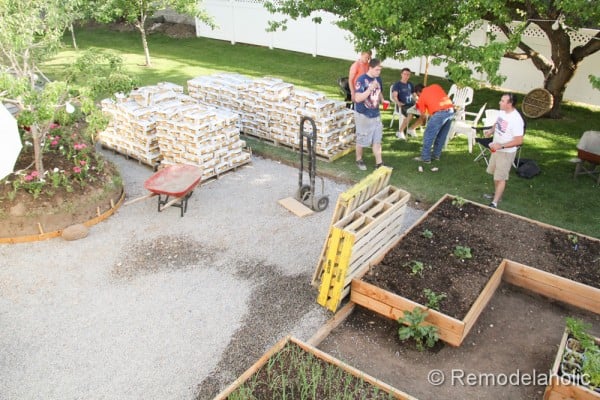 Just in case it rained, cover it up with a huge tarp. 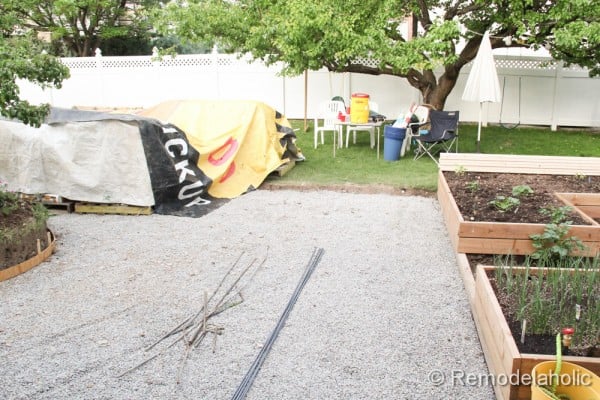 So that is all the prep work that we did before we could start pouring the DIY concrete patio.  Stay tuned for part two to learn how we mixed and poured the patio in one back-breaking day (of course, just our luck, it was the hottest day of this year!).

Thanks to Quikrete who sponsored the concrete portion of this project.  All other supplies and materials were purchased by us, all opinions are our own. 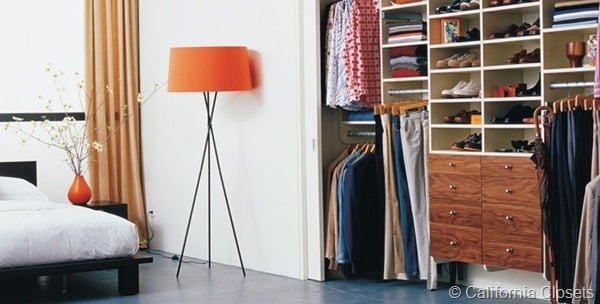 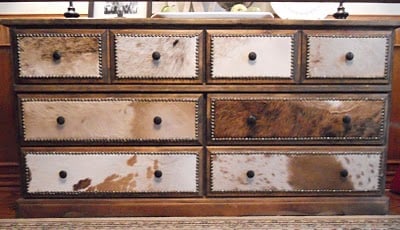 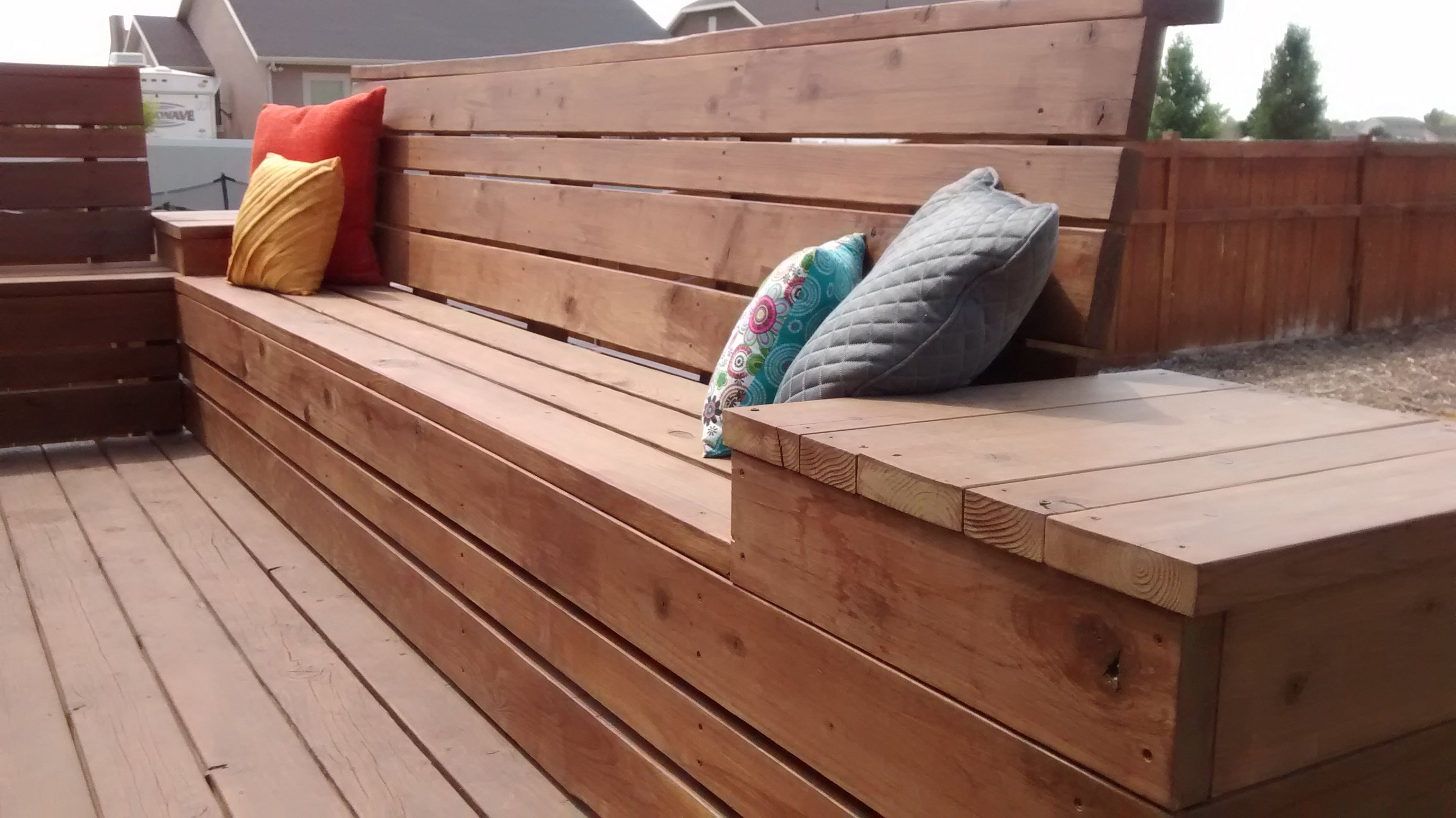