Now that you have seen our prep work for the DIY concrete patio, we wanted to show you how we mixed, poured and finished the patio.   Also, in case you didn’t see the plans for the backyard or the raised garden boxes, just follow these links. 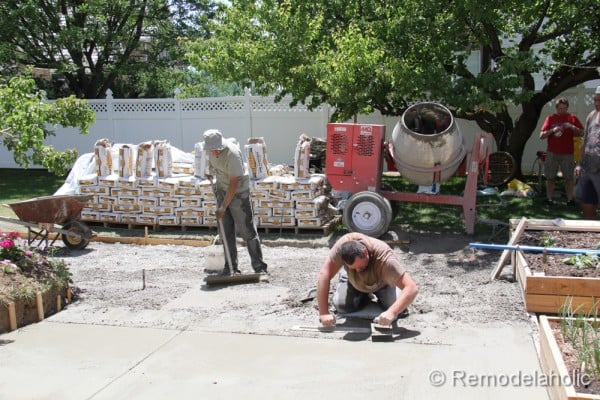 We decided that we wanted to try and pour the whole patio in a day.  We didn’t want to have to rent the mixer longer then we had too.  That meant that we had to get up early and do some final prep work, then start mixing.  Dallin (my new concrete buddy) was confidant that we would be able to pull it off.   Well, after the final prep work, we ended up starting to mix at about 8:30 am, let the LONG day begin!

Tips for  Mixing, Pouring and Finishing the DIY Concrete Patio

Mixing  and Pouring the Concrete

First thing that we had to do was get the gravel wet.  Once that was ready we started to mix.

This is the big mixer that we rented.  This bad boy was on all day long.  We only had to fill the tank once with about a gallon of gas, during our lunch break.

It says that the mixer can hold up to 16 bags at a time, but we decided to do half, about 8 bags to get the texture just right.   We added one bag at a time while spraying in the water.  It took about 15 min. to get it to the right texture.  Once it looked good, we loaded up the wheelbarrow and started pouring it in place.

Here is the repair that we had to make to the wheelbarrow.  This was a good old wheelbarrow.  Um, VERY old, but it was very sturdy.  We loaded about a third of a batch in the wheelbarrow, then wheeled the mix to the spot.  We started with the farthest end of the patio, away from the mixer and worked our way toward the mixer.

Here you can see it roughly leveled out and the control joints started.  We were getting close to half way at this point. 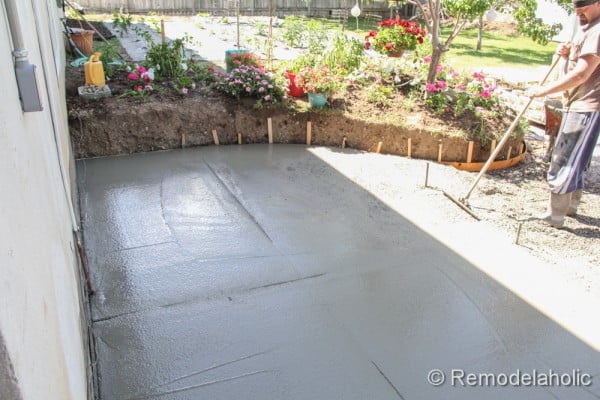 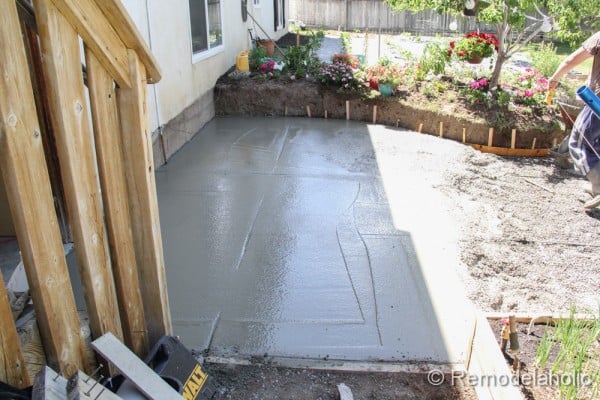 Lots a mixing and lots of trash!

I was glad for the mask on a day like this. 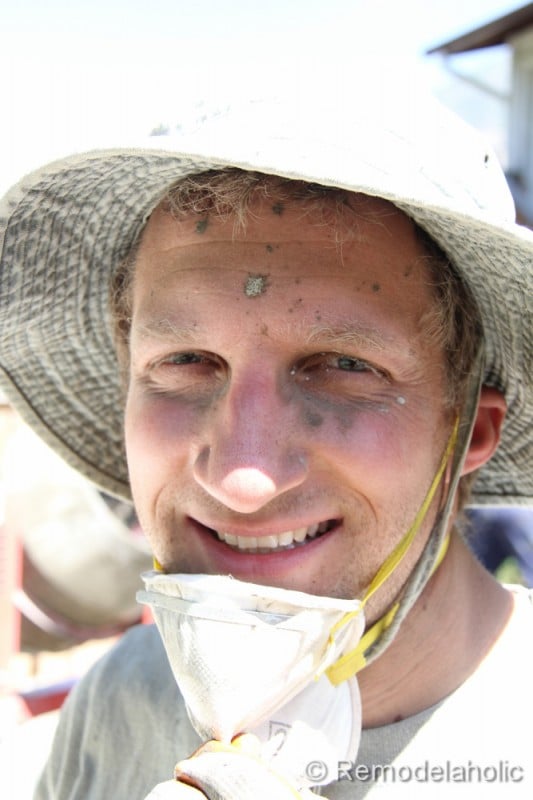 Dallin did great with the finishing work.   It was nice that he had all the right tools to get the job done right.  He is finishing the control joint at this point. 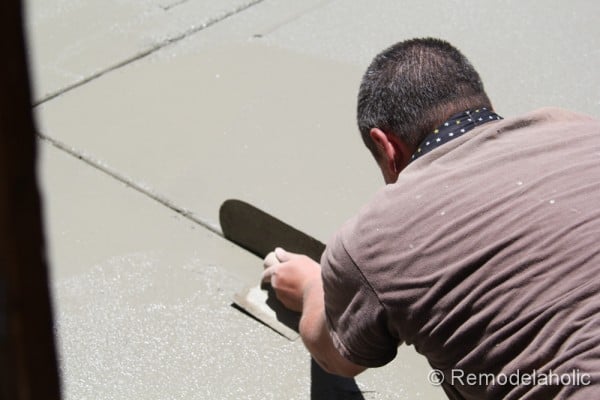 Now we were more than half way done and Dallin was able to finish this section off completely.  We decided that a broom finish was going to be the best and easiest finish on our patio.  It would give a nice texture and will help keep people from slipping  when the concrete is wet.  (and since this is a place for our girls to play, we want it to be safe!) 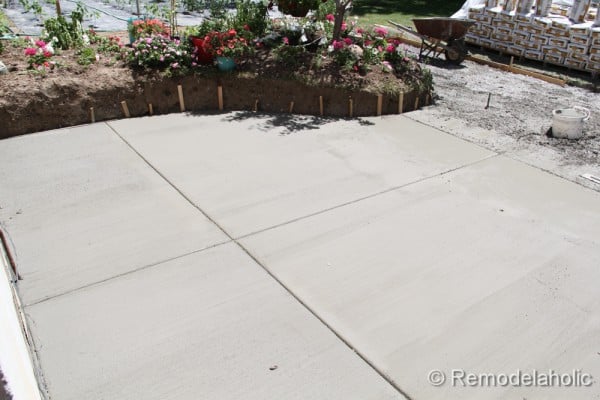 Our little princesses kept coming out to see the progress.   They were so excited for their new patio.  They were just dying to step on it. 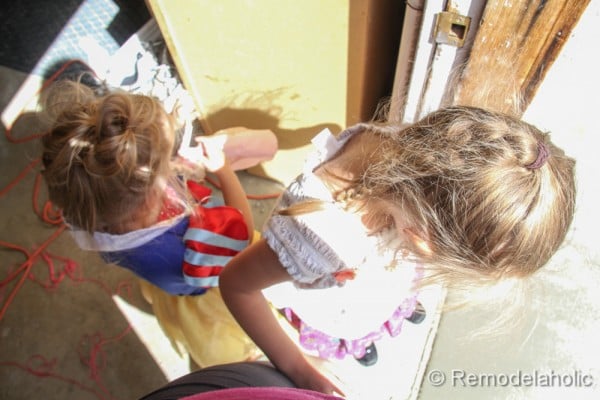 It took about 10 hours to finish pouring the concrete and about two more hours to finish it of completely.  It was a really long day.  We where glad when it was over and glad that we didn’t have to do it again the next day.  (a special thanks to Dallin!  He did the hardest work!  We were so thankful!

The next day, the color of the concrete changed from gray-green to a light gray.   The surface of the patio was all dry and we were able to walk across it.  Because we poured it all in one hot day,  the finish was not quite as smooth as we had hoped it to be.  We asked Dallin if it was okay to scrape off the top to make it smoother to walk on.  He said that it was a good idea and it was best to do that early before it hardened even more. 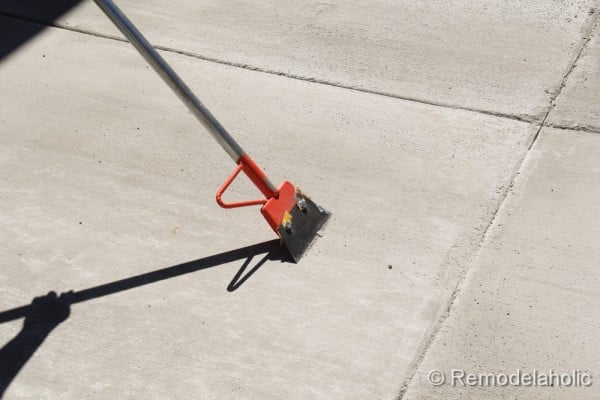 After we scraped it and hosed it off,  the girls saw the perfect opportunity to ride their toys on the new patio.

Moments like this, where Etta took here first ride across the new patio, made all the hard work and time, worth it.

There was some clean up that we had to do on the lawn, after all the mixing.  We had to have the mixer on the lawn for a couple of hours toward the end of the day and it made a mess.  We took a rake and had to scrape off the spilled concrete, so the grass would grow back.  Next time we will lay down a tarp under the mixer for a easier cleanup.

I personally was glad when the project was done.  It was a big project, but well worth all the time and effort that it took to get our new concrete patio. 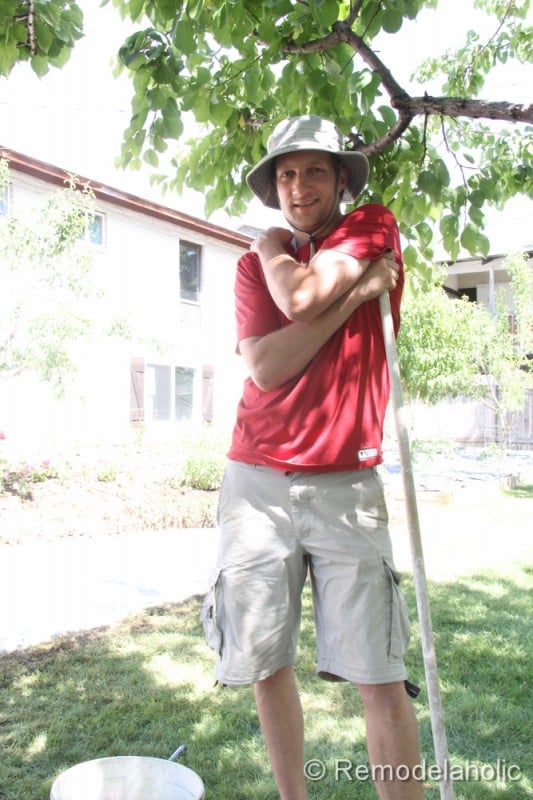 This is how it looked about a week later.  We finished off the patio with flowers and patio furniture. 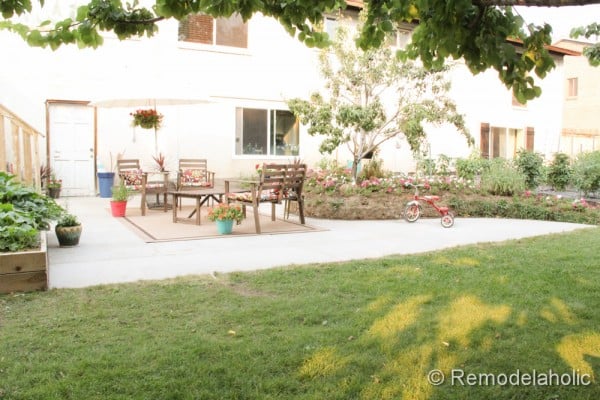 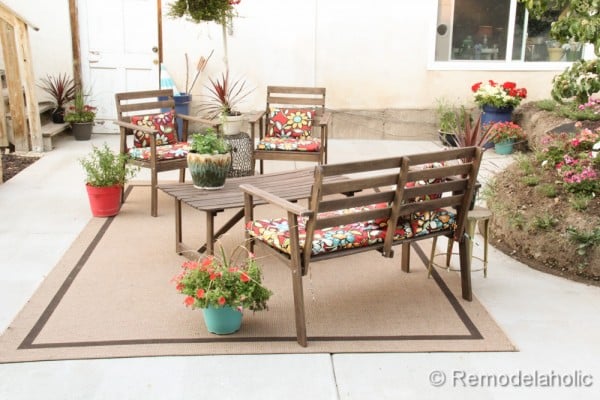 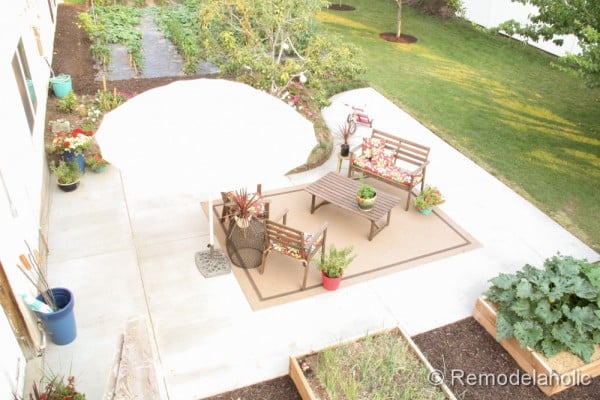 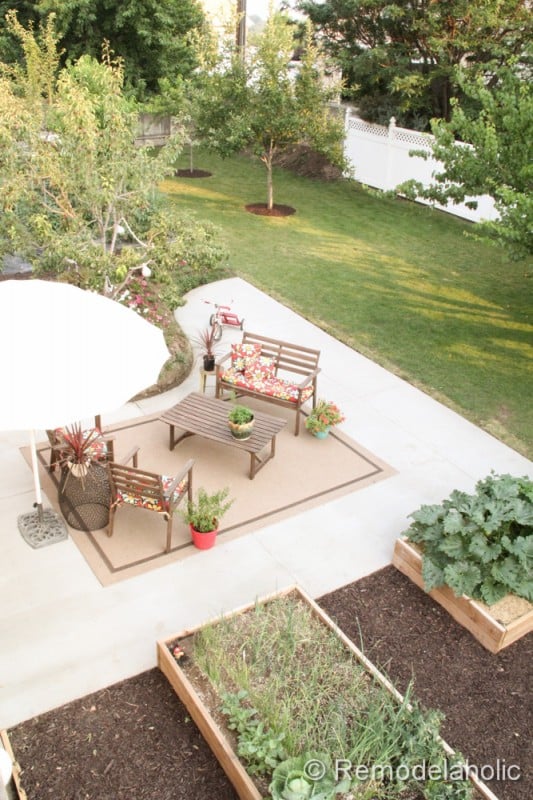 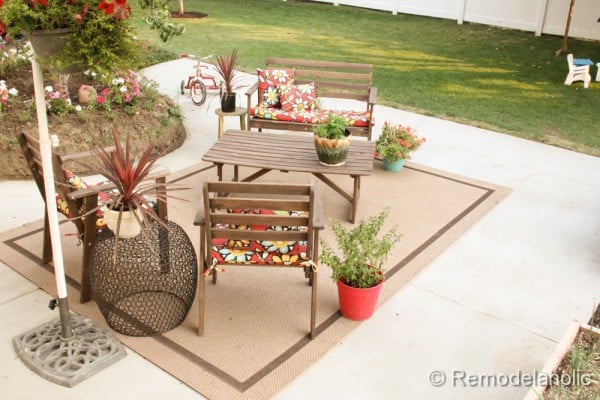 We are planning on a stone retaining wall from Pavestone that will be come soon.  Luckily the clay soil is holding it up all by its self, until we can get the wall in.  There will also be a set of stairs that will take you up to the other garden area. 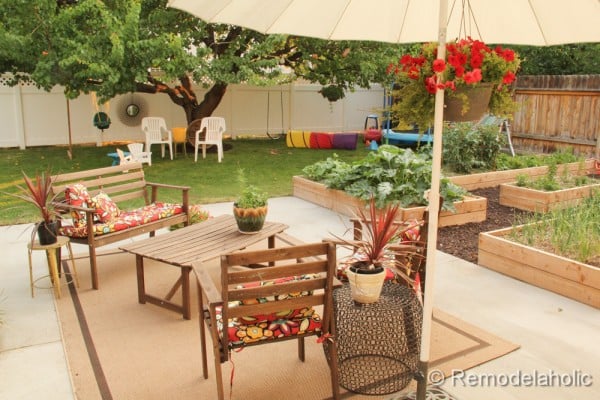 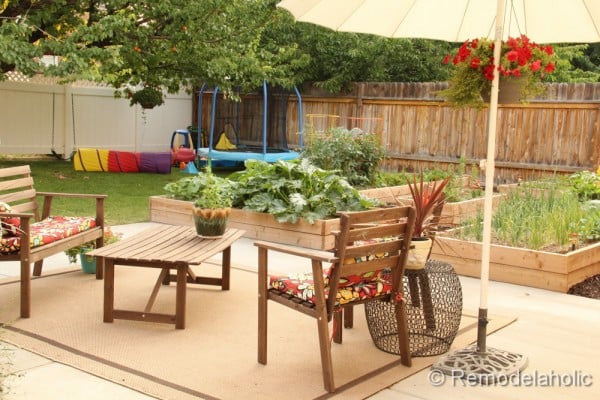 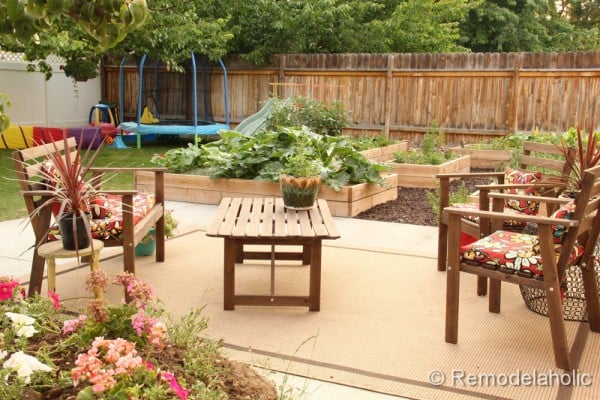 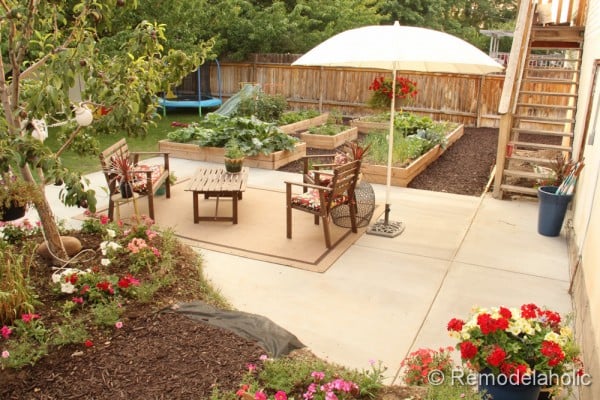 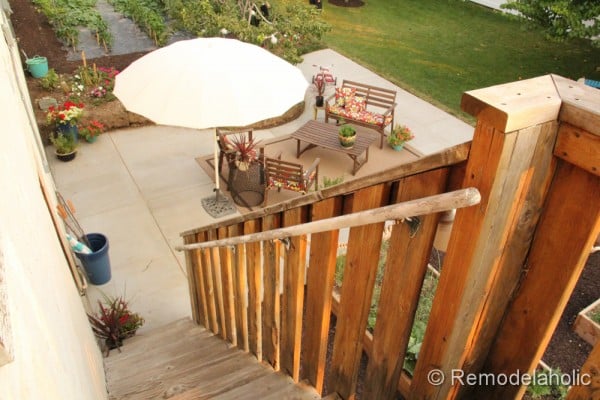 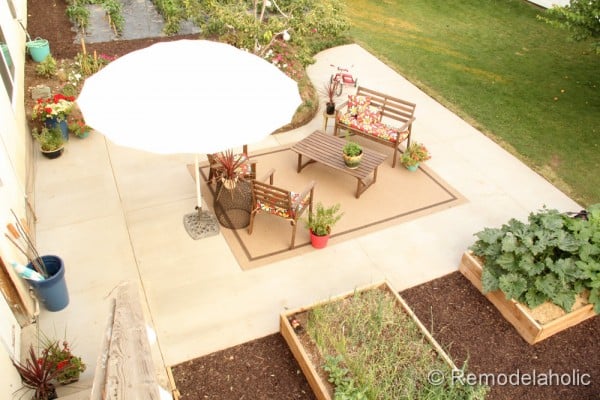 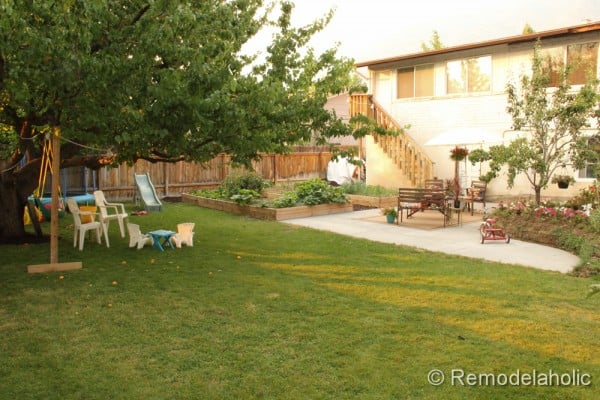 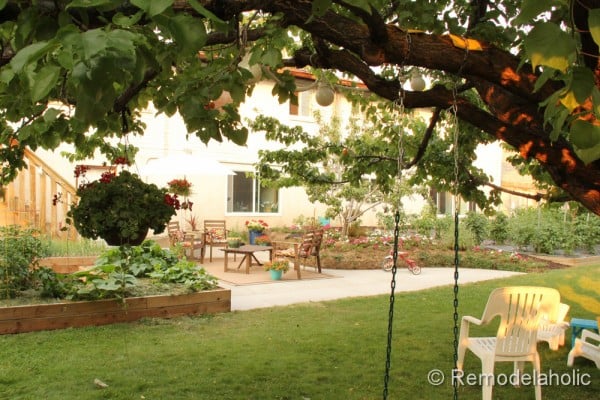 We hope that you like the project!  Let us know what you think.

Thanks again to Quikrete who sponsored the concrete portion of this project.  All other supplies and materials were purchased by us, all opinions are our own.

We can’t wait for the new wall that we will be installing soon, along the flower bed. 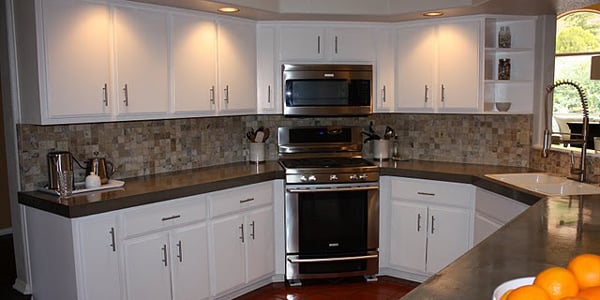 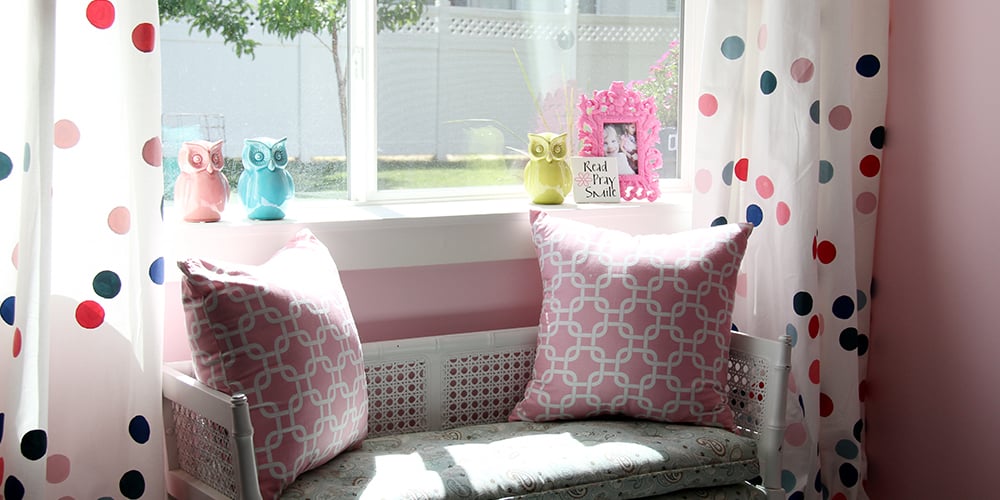 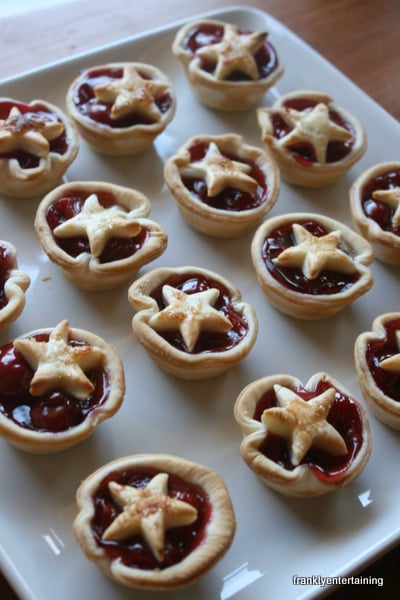 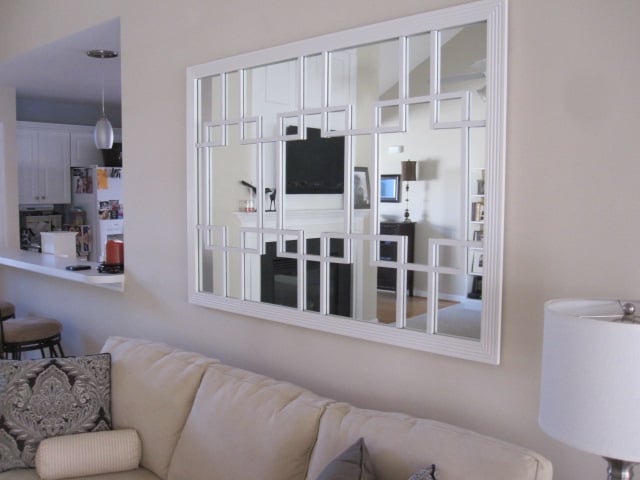 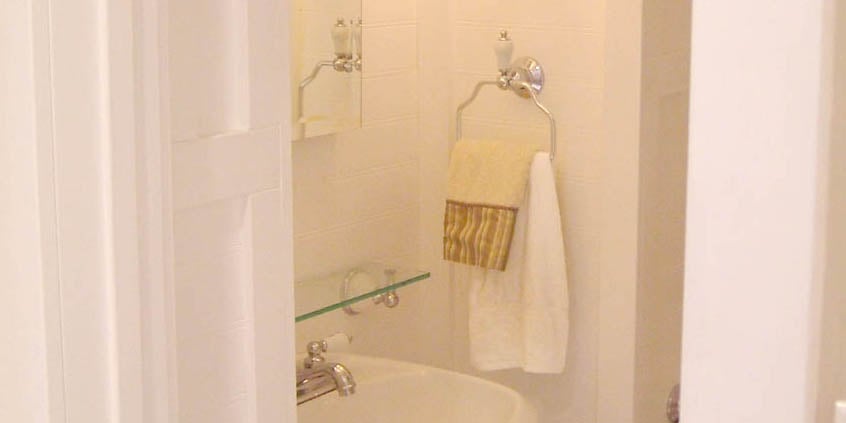 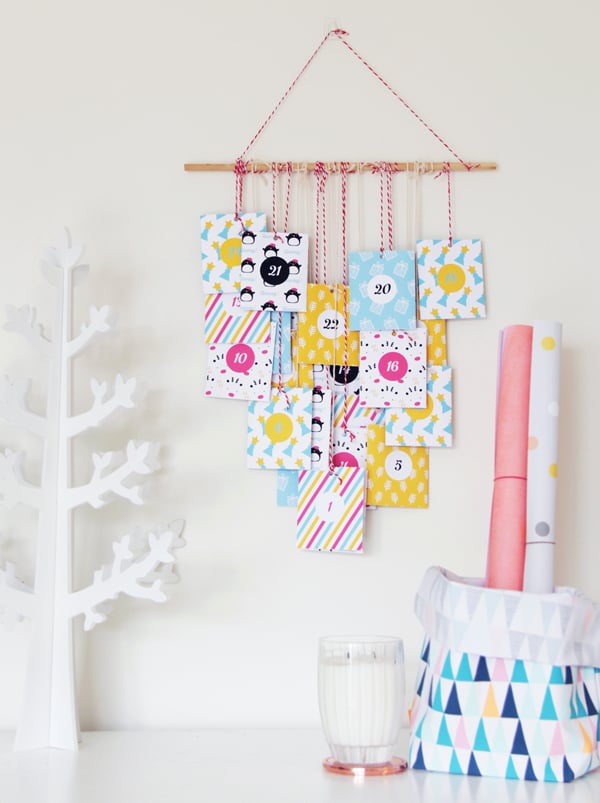