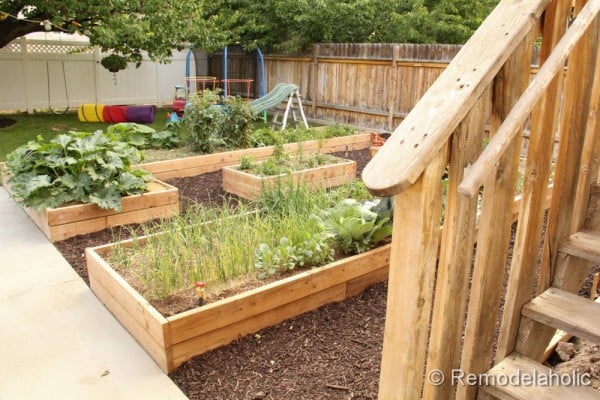 Now that you have seen the backyard design, we want to start showing you how we got started on the raised garden boxes and the steps that we had to take for this huge backyard renovation.  This was no little task.  It took a lot of thought and planning before we were able to start working.

First I want to take you back a little bit about how this all started.  I received a phone call last year December from my uncle who was building a duplex and had some extra lumber he wanted to see if I wanted.  At first I didn’t think that I could use it anywhere.  I wasn’t even thinking about the yard at all.  A couple of days passed by and I realized a huge pile of  2x6x16′ Douglas Fir wood would be great for building some raised garden boxes.  There were also a bunch of pressure treated lumber as well.  I called him back and loaded all the wood up on my little utility trailer and took it home.  I estimated about $300+ worth of lumber that he gave us.  That’s huge! 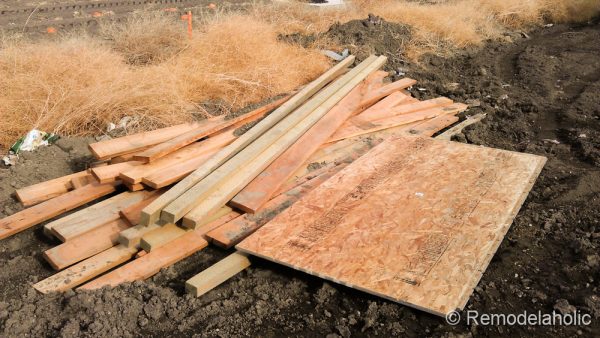 We read that it is best to use untreated wood for the raised garden boxes, instead of pressure treated wood.  So,we decided that we had enough to put in the design and got to work.

These are some before pictures of the backyard before we stared working.  This was in April, by-the-way.

We started off by laying out the design.  I used strings and levels, between two stakes, to set the sides and corners of the boxes.  We started with the box near the house and set an equal distance from the house for the side of the box. 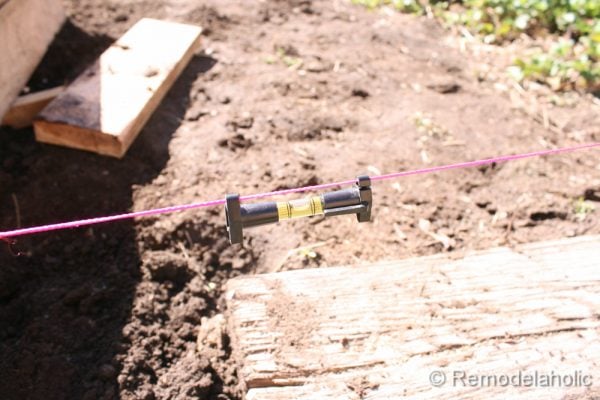 We had to remove the old railroad ties from the old garden border.  That was really fun for the girls, because we dug up a lot of worms.  They loved it every time when we were out there digging to find new worms.

Once the area was roughly leveled out, we started assembling the sides of the boxes with deck screws and stakes.  We wanted to keep the design simple for the raised garden boxes.  We hid the vertical stake supports on the inside a couple of inches below grade.  These stakes were about 18″ long.  About half was buried in the ground, to keep the boxes in place.

We wanted to get some of the cold crops planted before it was too late.  So, we build this partial box first to have ready to plant things like beats, cabbage, onions, spinach, kohlrabi and broccoli.

These are some pictures of how the stakes looked inside the boxes before we shoveled the dirt in.  We had to make sure that they were level and square in place, before filling them with soil.

Here we started digging out the area where the future patio would go.  The boxes provided a place for all the soil that we had to move.  We filled up the raised garden boxes half way with the patio soil.  Then placed a layer of cardboard and weed barrier. The next half layer of a soil was a garden compost mix from the local farm store, that was weed free. 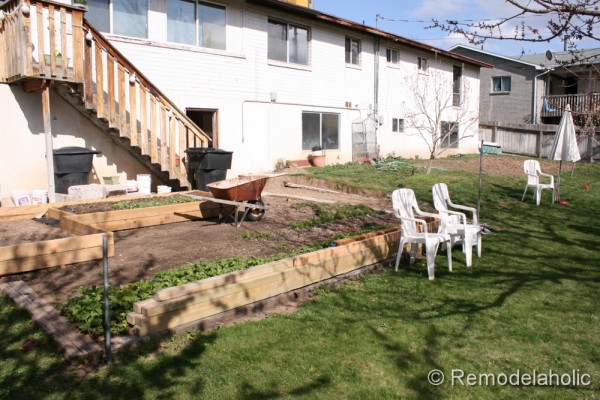 This is the first part of the raised garden box that we make to be able to start our early plantings.   We only bought half the soil that we needed at this point.  The rest will come later. 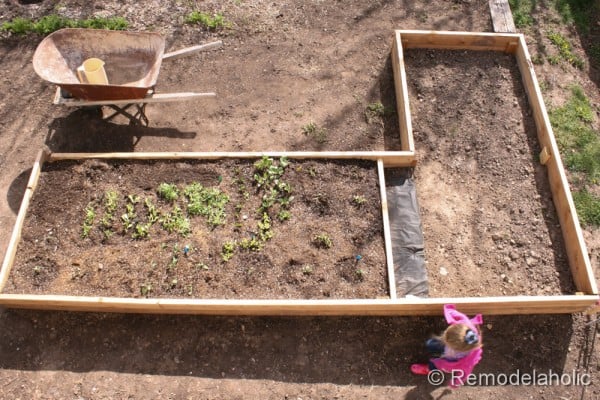 Once that was done, we started laying out the main edge of the future concrete patio.  This edge had to come off the house at a right angle and slope 2% or greater.  It was critical to get this form set right to drain water away from the house.  The far end of the form 23.5′ from the house, was 7″ below the door opening of the house.  It ended up being 2.4% slope.  I used some of the treated wood from my uncle to set this form.  It also acted as a nice base to set the raised garden boxes on for support to keep them at grade with the future patio.

Now that the form was in place, we finished the raised garden boxes completely.  That’s my brother from the same mother, in the back.  He has been a great help with this project. 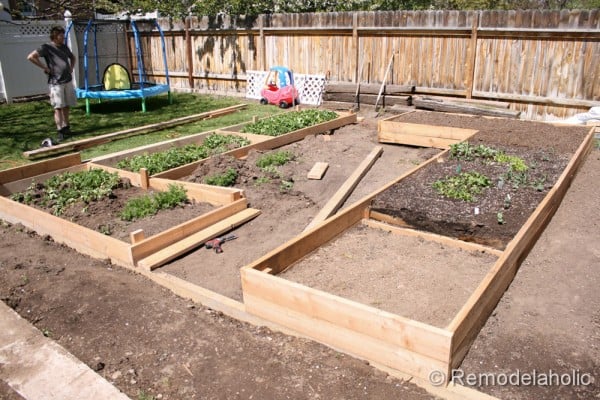 Because the boxes were so long, about 18.5′, we decided to add a lower brace between the long sides, to keep the soil from distorting the straight sides and bulging them out over time.

The raised garden box next to the grass, was build over a large strawberry patch.  We wanted strawberries this year, so we didn’t fill in a 6′ portion  toward the fence.  We will fill it out next year. 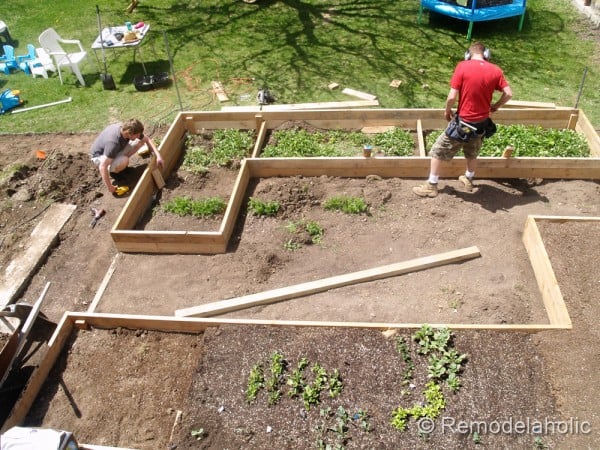 In the middle of the two L -shaped boxes, we added a small garden box that was going to be used for herbs.  We made it so the paths were at minimum of 30″.  That gives you enough room to kneel down on the path for pulling weeds.

This picture is showing you the holes the we dug out for the stakes of the box. 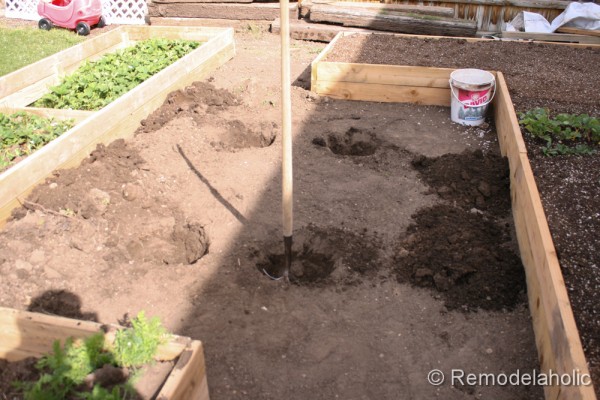 With all the stakes we used the back end of the shovel handle to pack down the dirt nice and tight to keep the boxes from shifting. 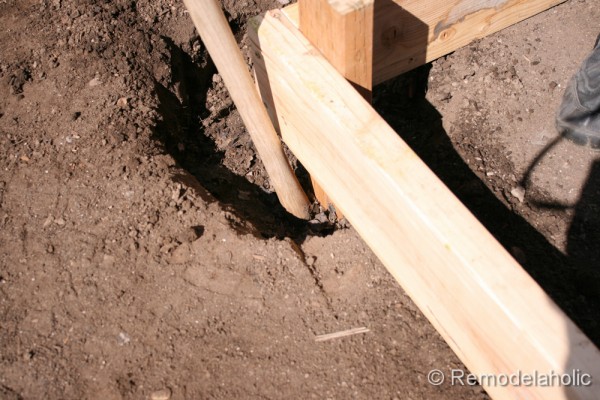 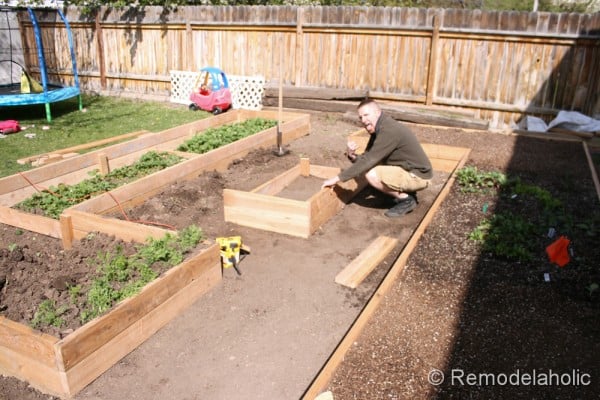 Now that the boxes were done, we dug out an additional 3″ of the old garden soil, to make room for a 3″ layer of shredded bark mulch for the path.  Here we are installing the weed barrier. 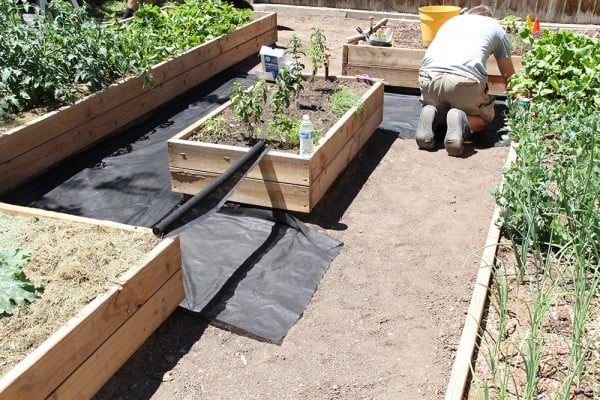 Now here are some different views of the completed raised garden boxes, with the bark mulch installed. 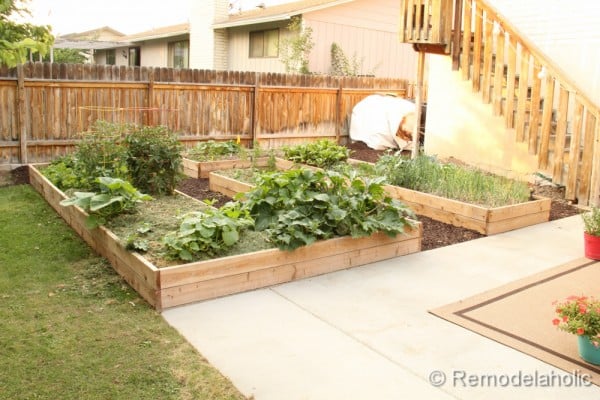 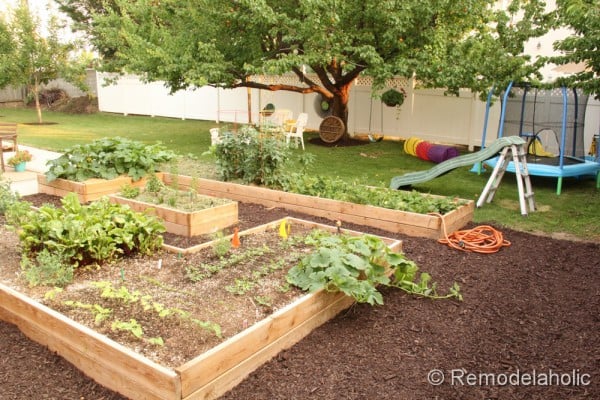 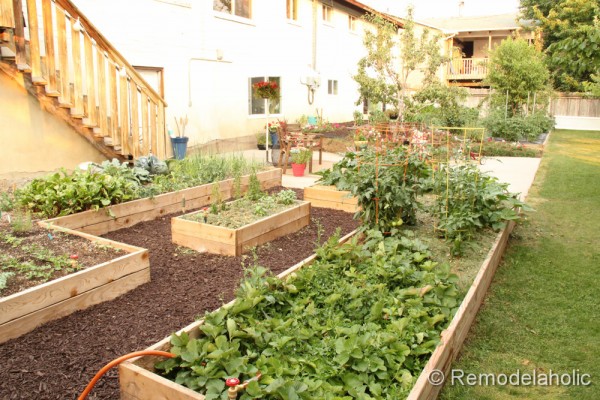 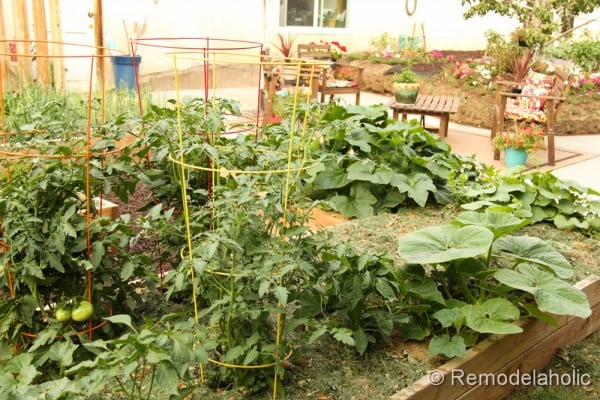 We did end up adding a hose bib in each of the three garden boxes.  This would allow for easier watering throughout the season.  You can see it in the picture below with the red handle. 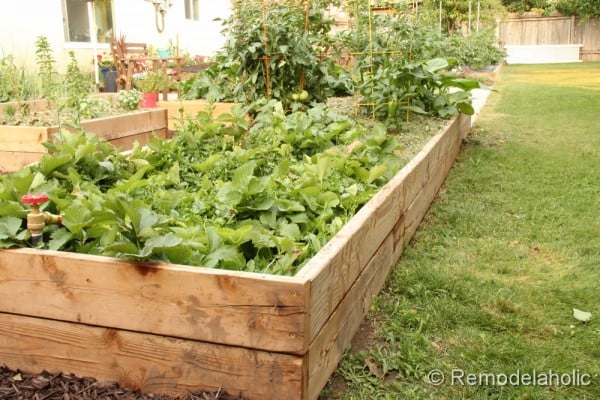 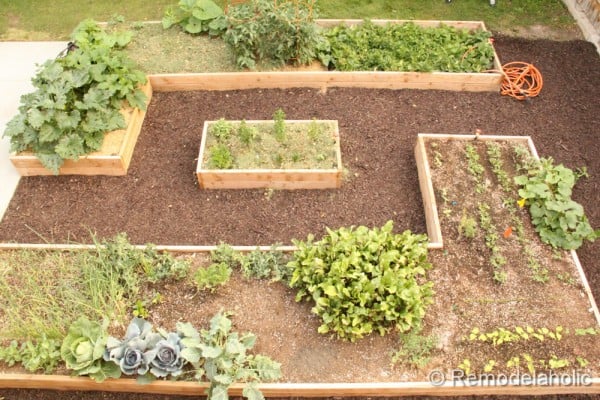 A lot different huh?  I would say that it is a big improvement.

Stay tuned for how we got started on the concrete patio. 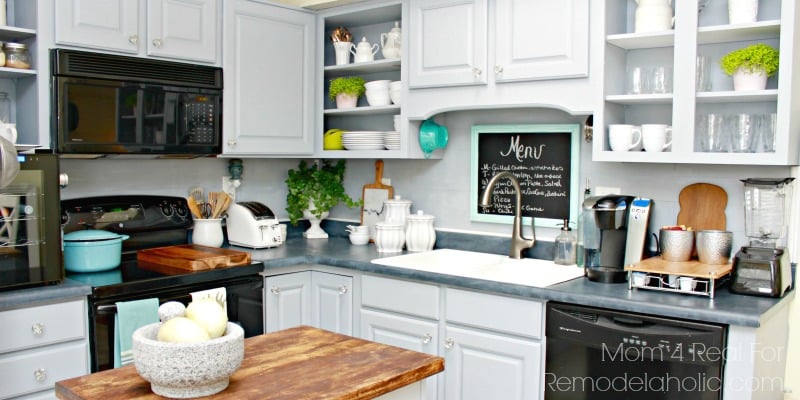 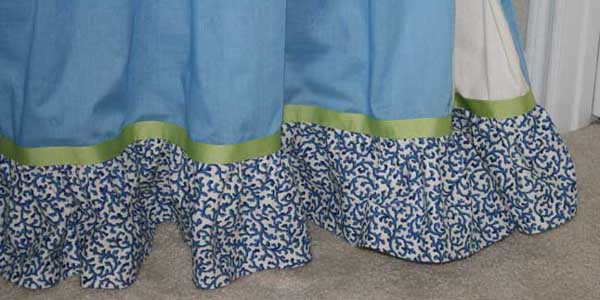 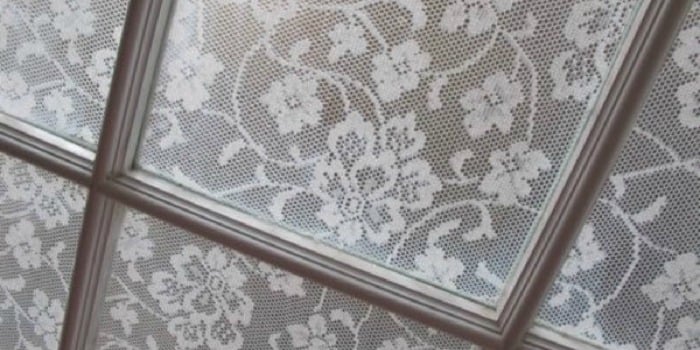 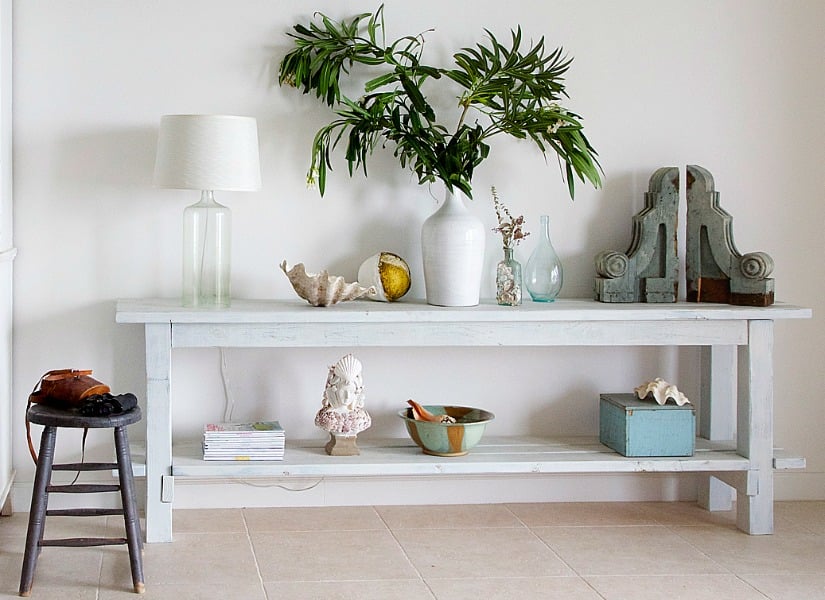 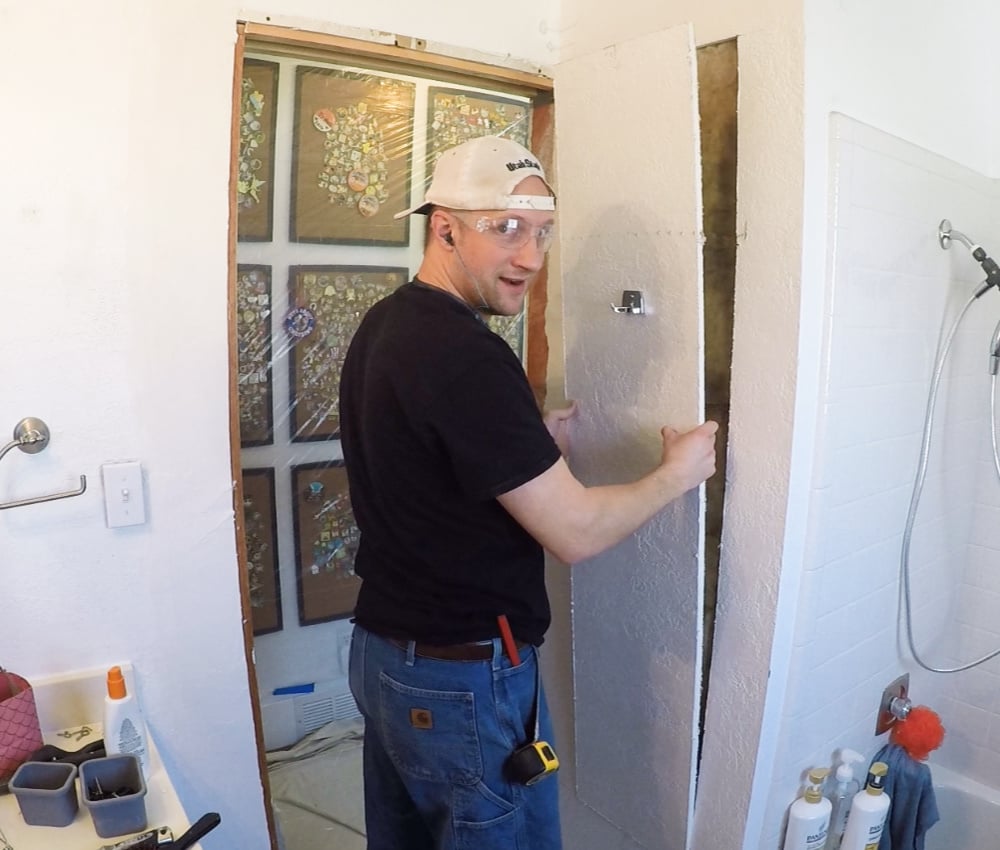 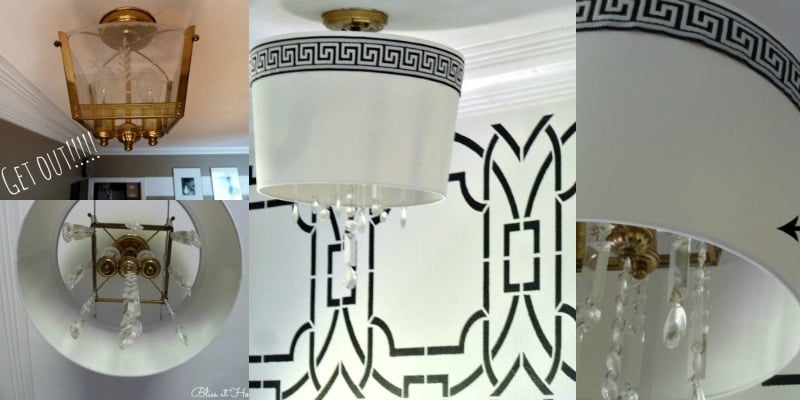