GET BUILDING! Click here for our favorite outdoor woodworking plans.

This party link is a great before and after from Inside the Yellow House, I especially love the built ins – I LOVE built ins!


After I revealed you with before-and-after pictures of the front and back of my house, a couple of people kindly asked to see the inside as well.  So, here’s the first installment: the living room and dining room. 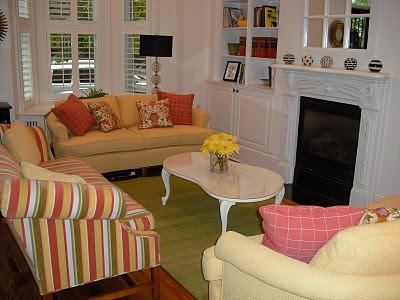 The house was built in either 1878 or 1880, depending on which records you reference, and, frankly, it hadn’t had a lot of maintenance since then.  It was in pretty bad shape.  Interestingly, it was built without a kitchen or bathroom (more on that in subsequent editions), which just fascinates me.

I often say that work on my house will never be finished because I’m constantly thinking about the next project.  But here’s where things are right now.  I’m so happy with the way the renovations turned out.

But first: the “before” pictures.  I wish this blog had Smell-O-Vision, so you could fully appreciate the overpowering smell of stale cat urine that had completely permeated that gorgeous brown carpet. 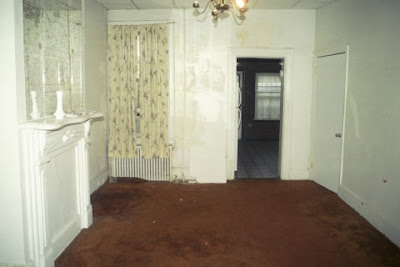 When I bought the house, the living room and dining room were two separate rooms, separated by a pocket door.   I hated to get rid of the pocket door, but I ultimately decided that the first floor would feel so much bigger if the two rooms were combined. 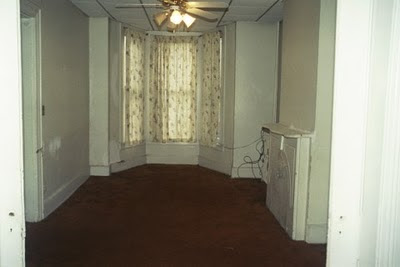 There was also a little tiny entryway that led into a very narrow hallway and up the enclosed staircase.  The result was that the house felt really cramped.  Those curtains don’t do much for the house either. 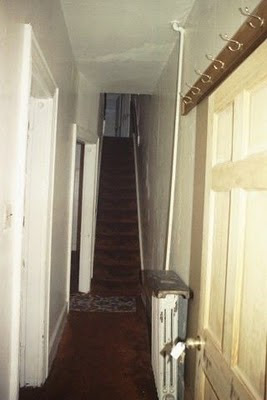 And, here’s how it looks today!  A little different? 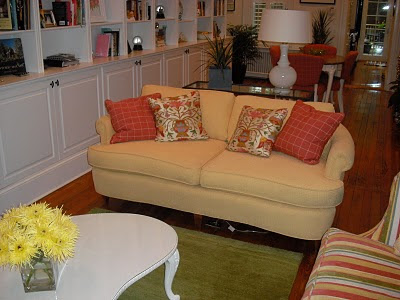 When we ripped up that brown carpet, we found 1950s “parquet” linoleum.  And beneath that, the original heart pine floors, which were perfectly preserved by all that linoleum.  And white paint is obviously my best friend.  I think the white walls are a great canvas for all of the other color. 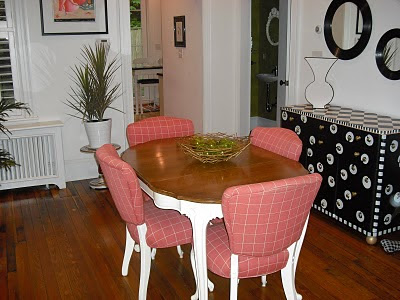 Most of the furniture has been repurposed, repainted, and reupholstered from the pieces’ former lives.  The dining room set and coffee table were my grandparents’ and were originally painted sort of an antique gold.  I think my grandparents would be surprised to see how they look now, but I know they would just love that I get so much pleasure from their treasures. 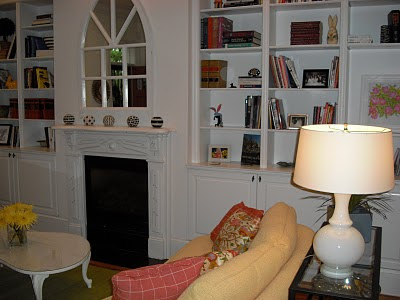 The house had four fireplaces when it was built, and the mantel currently in the living room was originally in the dining room.  When I decided to get rid of three of the fireplaces due to lack of space, I kept this mantel, which I liked better.  The mirror above the fireplace used to be a church window.  I found the frame at a flea market and added the mullions, mirror, and–of course, a lot of white paint. 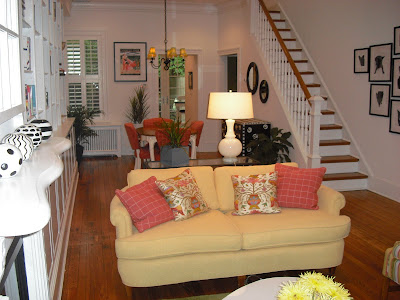 The portraits of Mr. Bullet were taken a few years back by a professional photographer in Alexandria who specializes in pet portraits.  I couldn’t pick just one.  (Yes, I am that dog owner.)  Notice that the staircase is no longer enclosed.  Taking down that wall was apparently a big endeavor, but it was so worth it. 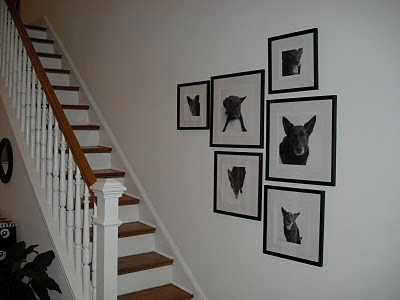 Pink and yellow and black and white are my two favorite color combinations.  I love that I was able to incorporate both in the house.  But I swear I loved that sour apple green color long before it became as trendy as it is today.  The buffet was also a flea market find, transformed with some paint and drawer pulls mounted flush against the surface. 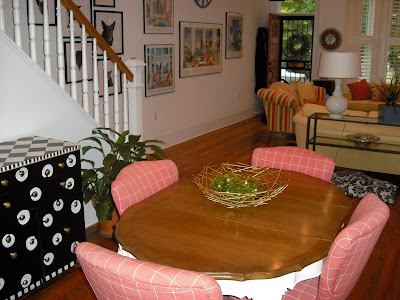 The built-in bookshelves really complete the room (and provide a lot of much-needed storage).  The contractor thought they would be too much and wanted to limit them to the living room end of the room, but I’m so glad I insisted on the whole wall.  The room looks so much bigger than it ever did before the renovations. 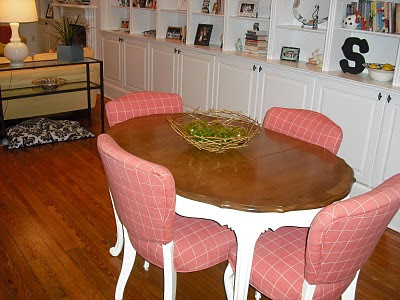 So that’s the living room.  Literally, each night when I come home, I think how much I just love it.  If you happen to be in D.C., come see it in person!
WOW!  That before was pretty scary I am so impressed with the after!
Remodelaholic is a participant in the Amazon Services LLC Associates Program, an affiliate advertising program designed to provide a means for sites to earn advertising fees by advertising and linking to amazon.com. Please see our full disclosure here.