First Day of School Printables Updated!
Living Room Redo Part 3;
Experimenting with Furniture Layouts
by Remodelaholic
If you wanna read about our current project click here Part 1, Part 2, Rugs, and Sofas.
Okay, so at this point in the remodel we have our columns and arches up, but we really don’t have any time or money to do anything else- and like I ‘ve mentioned before I get distracted easily so I was working on other things.  And there our poor little living room sits neglected and unfinished for another 12 months….
In this mean time, our baby is getting older and the blog is getting bigger, which means a bit more computer time.
When we moved into this house we made an armoire- turned entertainment enter, into a computer station/office.  It was great in that when you didn’t’ want to see all the techy junk, you could just shut the doors.  But it was also kind of  isolating because of the doors.  We keep it in our main living space, and at first it was in our dining room, but it was making that room feel small, so I thought we would take it into the living room.   And the pandora’s box of living room layouts opened from there.
And let me tell you, I am still not exactly sure how I want this room to be set up but here are some of the ways we tired to set things up failures and all.  None of the furniture colors match and unfortunately I seem to have some sort of draw to different shades of un-matching green (not to be confused with Alissa’s awesome blog!) my greens don’t quite mix.  But that is what my sewing machine is for, I just haven’t found the free time yet to do anything with it.
Here is the basic floor plan (with columns in place:) 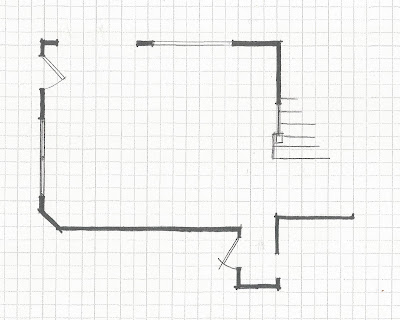 Pretty normal, couch on long wall and love seat in “L” shape.  The piano is sorta stuck in front of the half wall because there is no room for it anywhere else. 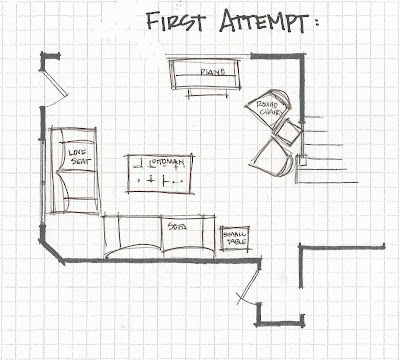 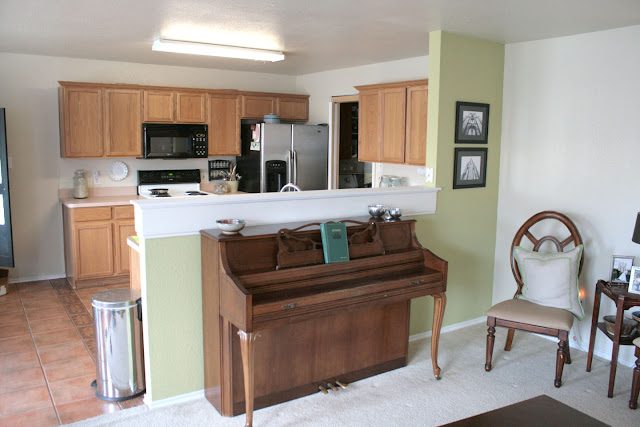 For a while we had a love seat in front of the back window that I was going to recover, but it didn’t work out and I never got pictures!

Next, was a simple change.  We removed one of the round back chairs.  Moved the other to a new location.   Added the computer armoire to the corner, near the piano, since this was the only place it would really fit. 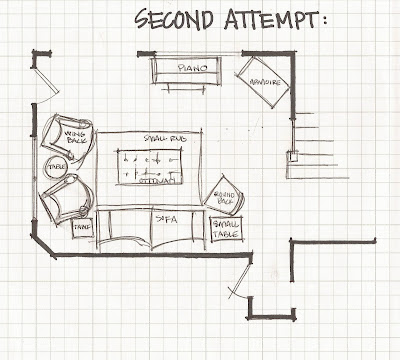 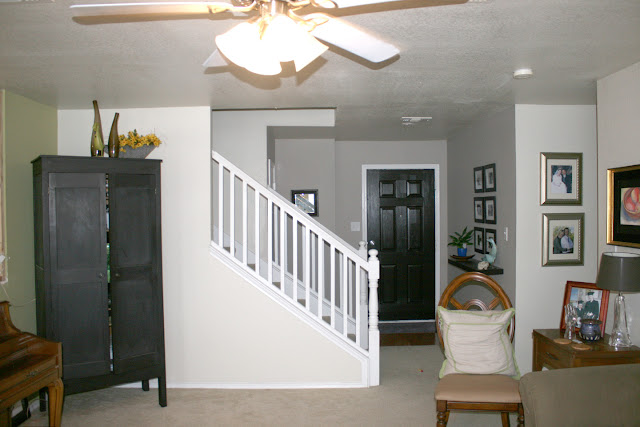 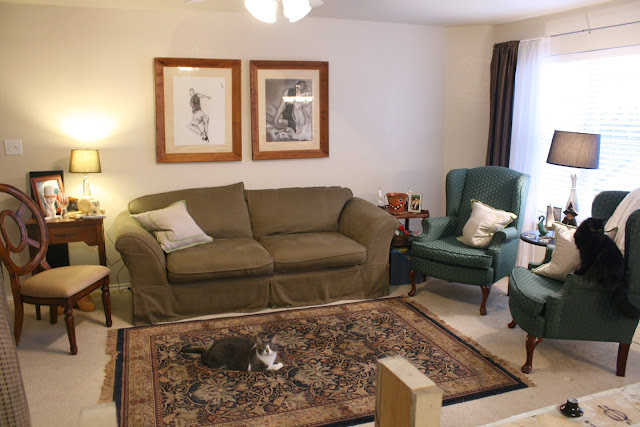 Our rug that is in the living room I love, but was too small, so I tried finding a cheap replacement –  first we removed it then put the new indoor/outdoor rug I got for like $75.00 at Lowes in it’s place… don’t love it, but it worked. 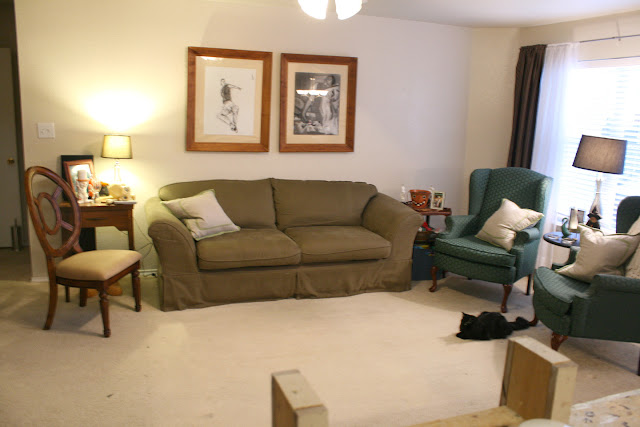 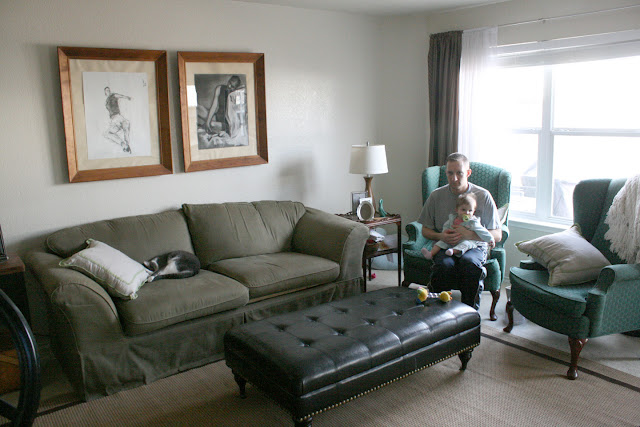 
At this point we removed the piano to the living room upstairs.  We had some very nice guys from church who came over and moved it, I felt awful asking but was so thankful for their willingness!

The problem was that the room felt SO off kilter with two huge pieces of furniture right next to each other ll on one side.   But the problem after this is it felt like such a bare spot once removed, and because of the placement of the armoire, nothing else could really go in that spot. 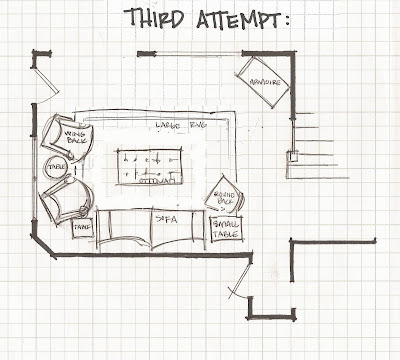 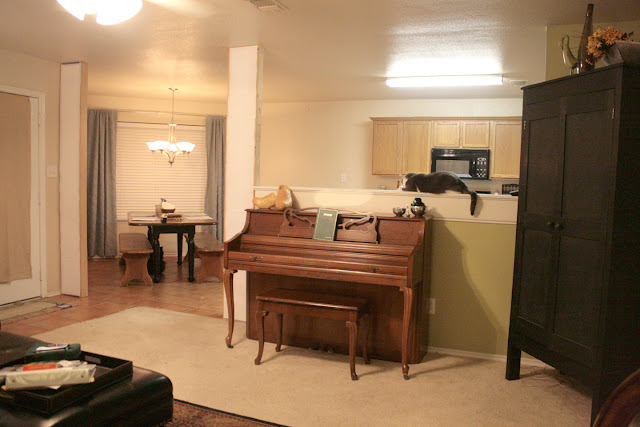 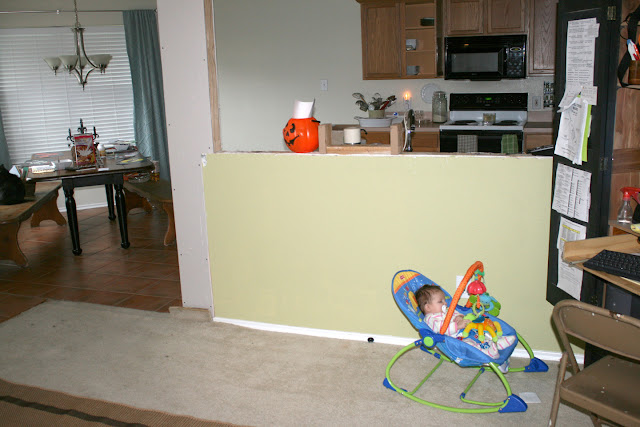 Here is what the rest of the room looked like for the most part it is the same as above. 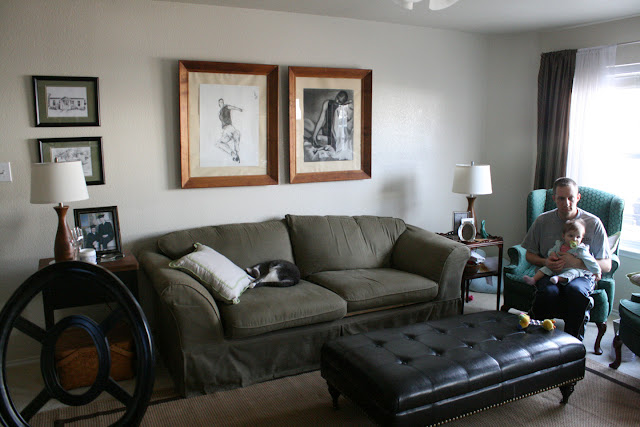 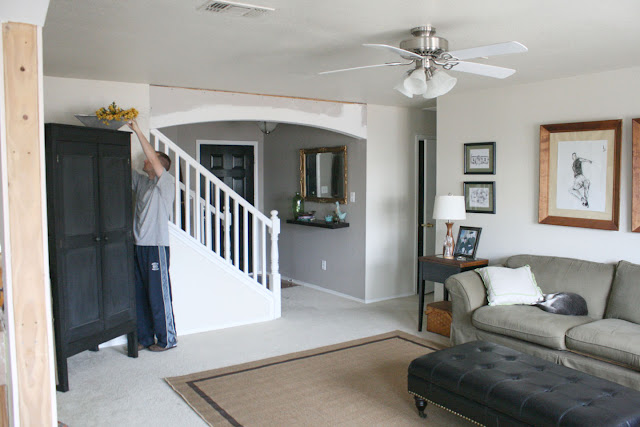 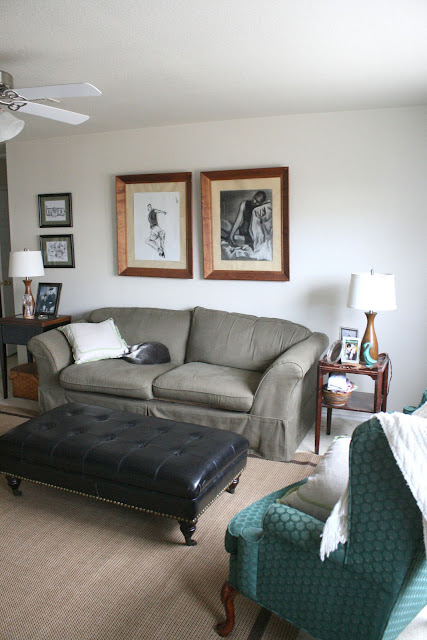 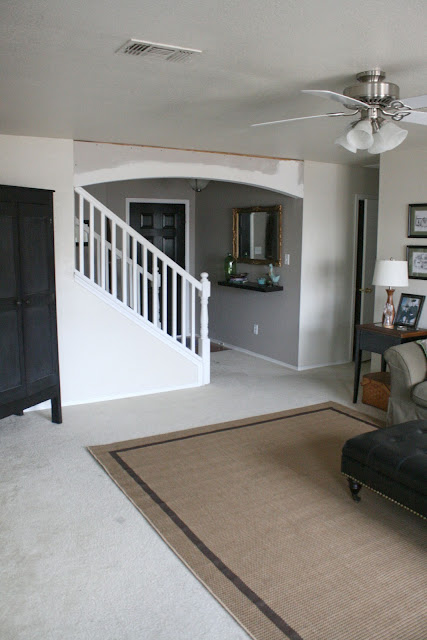 What is that line from dirty dancing which I have only seen like once in my life but it goes something like “Nobody puts Baby in a corner!”  Well, I was feeling sorta trapped in that little computer corner so we tired a new location…. didn’t last long, and I am not sure it ever really got past the trying out stage before it drove me completely batty!  ( I hardly even got pictures)


We put the wing backs in the corner… but they felt too big.  The armoire was HUGE on that wall, and blocked  my thought process too much.  At this point we also found some five dollar Craig’s list chairs ( love can’t wait to finish re-doing) that we put in front of the window, but it was just awkward. 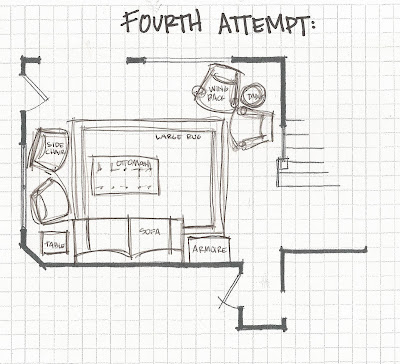 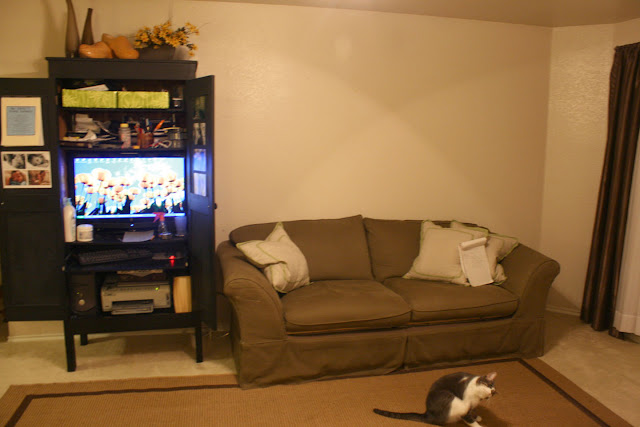 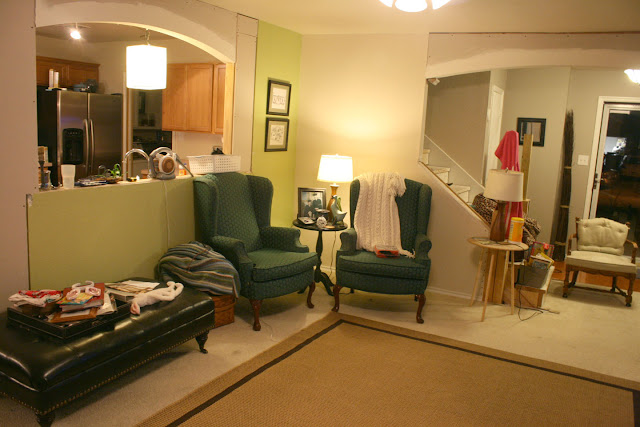 
We centered the armoire on the long wall, moved the couch to the window wall, with our makeshift sofa table from upstairs making it’s debut behind the couch.  The 2 $5.00 chairs across from that for a seating arrangement, and one of the wing back chairs in the far corner, because it felt so bare.

This sorta worked, except that I was on the computer too much to really have this work.  We ended up removing the ottoman.  And finally we had to come up with a whole new solution for our computer, cuz it just wasn’t working. 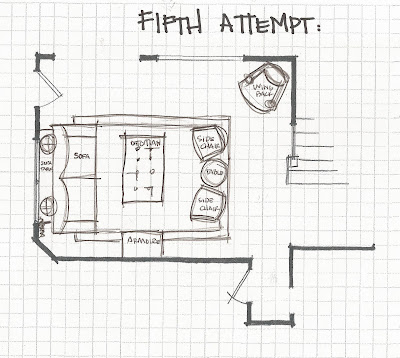 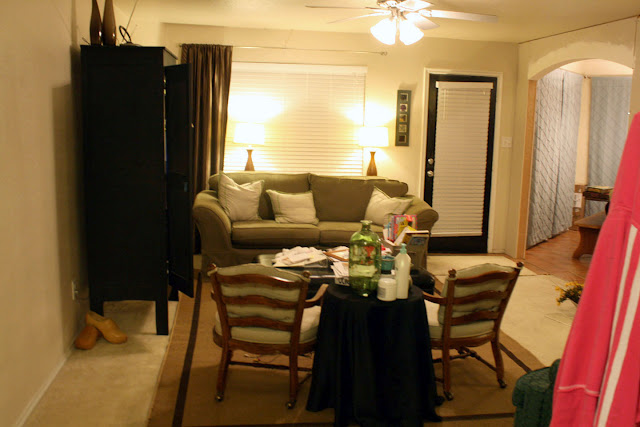 (another view while recovering the chairs) 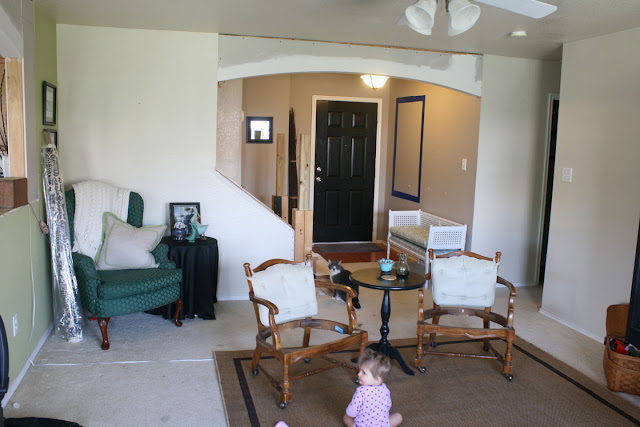 And an honest shot of what it looks like on a given day: 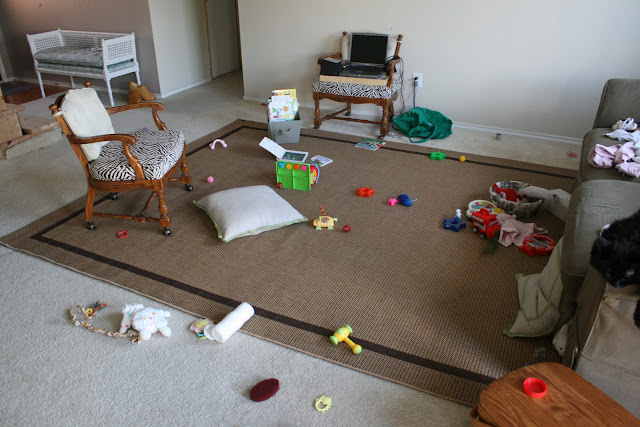 Here are the chairs re-covered, waiting on being painted, till I can spray paint again…
But I don’t think they are making the cut for this room! 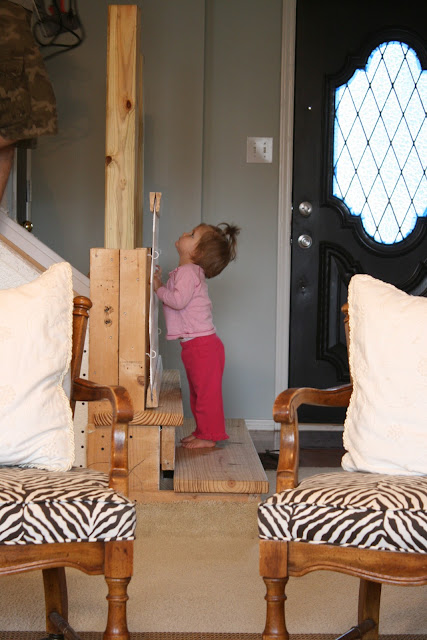 
You will have to wait and see, I have had the room set up this way for a while, but it was during part of the construction, so I don’t have pictures to share yet!

Next week, barring really early labor(since I haven’t written it yet!) I will show you the construction… and you will not be disappointed (or at least I really hope you won’t!)