This great office was emailed to me and I have to share it.  I think you may have noticed but I am LOVING the striped wall thing!  It looks so great, wanna see?  Check out this beautiful office transformation from  Michelle at Ten June.

Hello out there- it’s David, the other half of Ten June. So far, I’ve just watched over my lovely wife’s shoulder as we got this blog on the road. But today, I decided I’d give it a shot myself and on what better a topic than the lovely stripes that we adorned our office walls with?
I have to post the disclaimer that we undertook this project pre-blogging and thus, we’re sans mid-project pictures… so, with that said, I’ll just have to describe it it for you.
If you recall from the “Before and Afters” in our House Tour, you will remember that all of the main room walls in the house were painted the same blah neutral color. Here’s our office “before.” 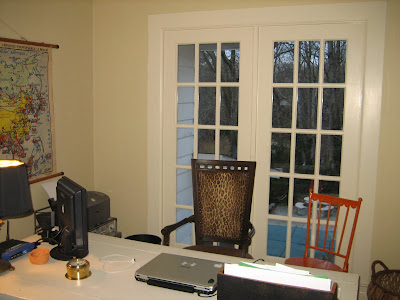 Just like all of the other neutral wall colors in the house, we decided right after moving in that this color had to go. We decided on a darker neutral in Olympic’s Dusty Trail. As we painted the living room and hall, we contemplated what to do with the office. We knew that we loved the Dusty Trail color, but we also wanted something that would stand out and make the office a fun and inviting space. Michelle came across a stripe painting tutorial at Young House Love (our favorite go-to blog), and boom – we found what we were looking for. So we went for it- contrasting stripes with our beloved Dusty Trail and it complementary cousin Off White. We chose the complementary stripe color from the same paint chip that Dusty Trail is on to ensure a proper hue match. YHL suggests that you paint from two colors that are close in tone, but we wanted more of contrast and so we chose the darkest and lightest color on the paint chip’s spectrum.
So on to the fun part – the STRIPES. In preparation for the stripes, we painted the entire room in Olympic’s Off White to establish a clean slate. Once the base was on the wall, the fun/hours of math/re-taping four million times to get a straight line/are-we-going-crazy-because-we’re-trying-to-paint-horizontal-stripes-on-the-wall began.
We decided that we wanted to have an odd number of stripes so that the darker Dusty Trail would contrast against the white crown moulding at the top of the wall and the base board at the bottom of the wall. It took us awhile visualizing the stripes to help us to decide on the number that we wanted – turns out 9 was our lucky number. We divided our wall height by 9 and marked a light pencil notch on the wall at each measurement point.
Then I experimented with a couple of methods to set out our game plan for the stripes (taping paper to the wall? way too complicated. using a laser leveler? not accurate enough) and found that a good ol’ fashioned tape measure was the best way to go. Michelle and I laid out the stripes by measuring from the ceiling down to the floor every three feet or so. The reason for this was to allow for shorter tape runs (trying to run a wall’s length of painters tape gets a little messy) and to allow for “checks” for the proper dimensions of the stripes. I’m not going to lie- it was kind of difficult to remember which stripe was being painted and whether the tape had to go above or below the mark. When you’re taping, you have to tape above the stripe line and below the stripe line and it ends up a little hairy looking (ie. like you’ve completely mismeasured the entire thing).
After a couple of hours of measuring and taping the walls, it was time to start rolling. As the paint went up, the stripes became visible and the effect we were looking for was coming to fruition. I’ll point out a key step to the process – tape removal. It is crucial that the tape be removed while the paint is still wet to ensure clean, crisp stripes. Otherwise, as the paint dries, it will bleed under the tape. And yes, we learned that the hard way.
After all that work, we were really excited with the results. Here are the stripes, in their glory. 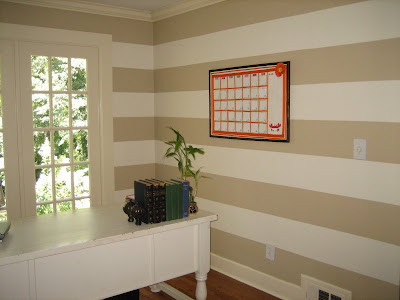 As you can see, the process was fairly easy and offers all kinds of character to brighten up a space. 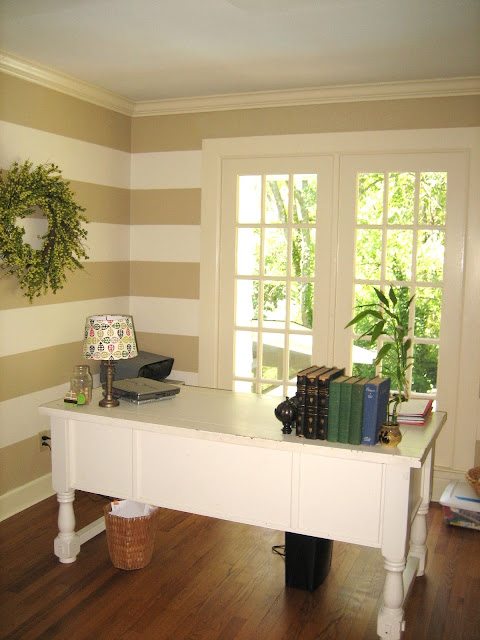 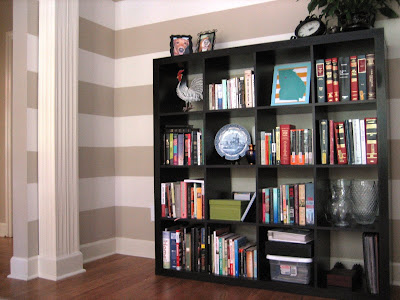 We like the fact that the stripes peak through the view from our living room. We definitely got the fun character we were looking for. Cheers to Mic for her great idea! 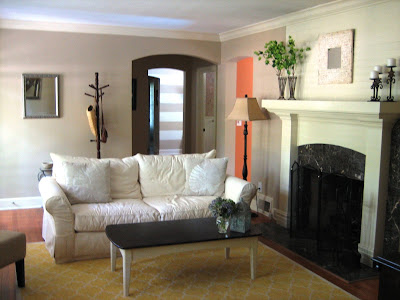 The stripped wall did turn out great.  It is nice to see them through the door way.  It gives it a little sense of excitement! 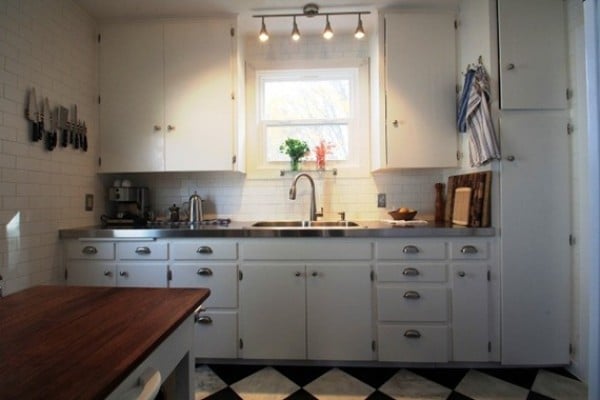 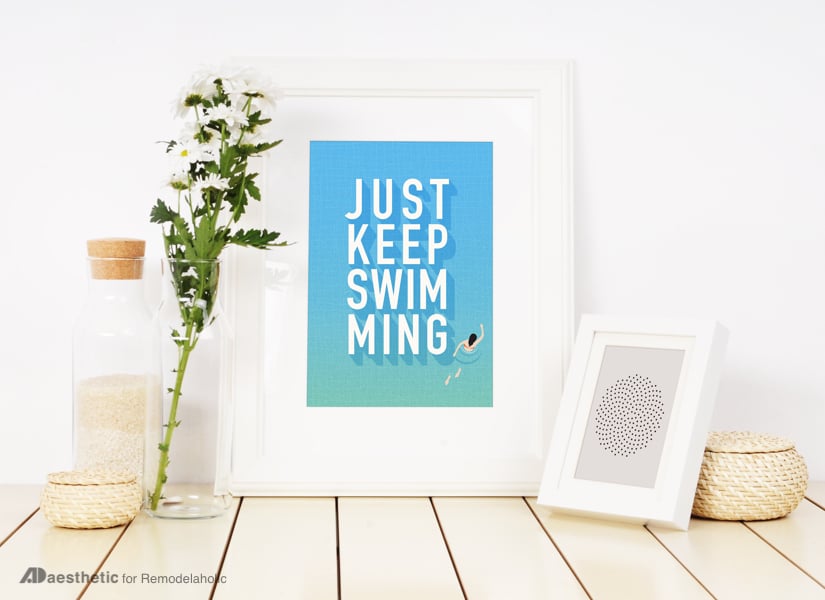 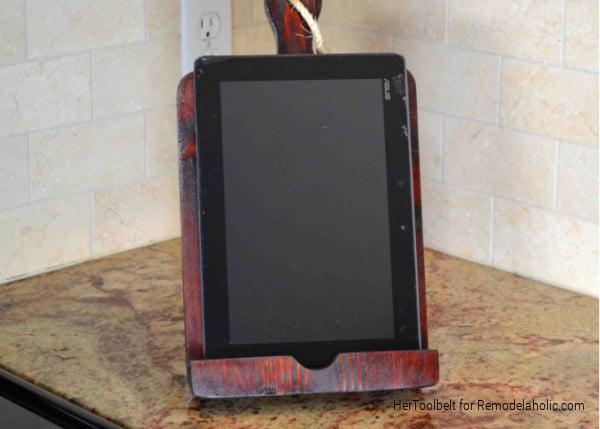 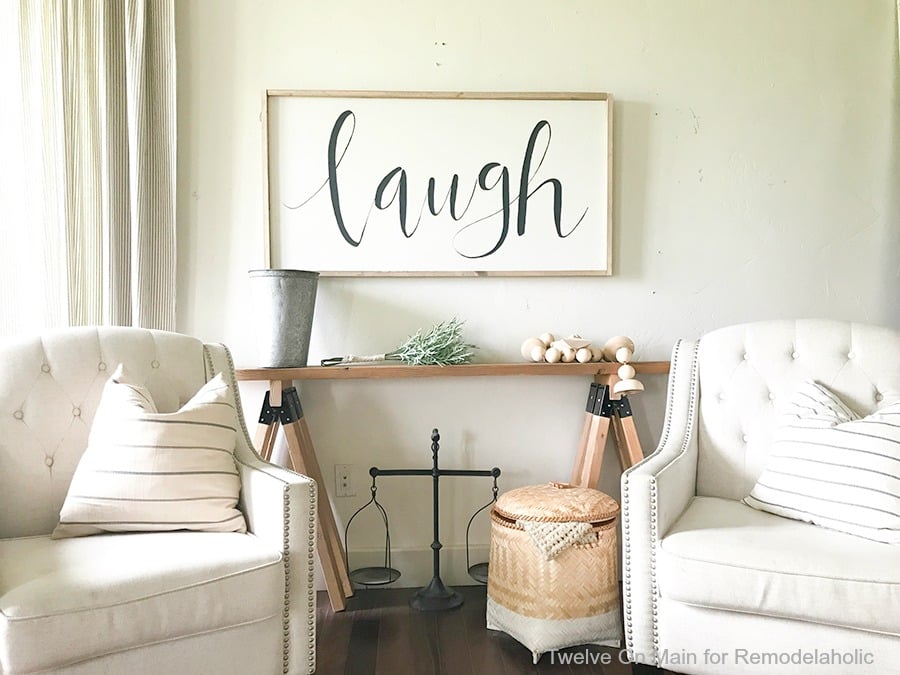