See how this couple used grouted peel and stick floor tiles in their bathroom renovation.  It looks good to me, see for your self though. 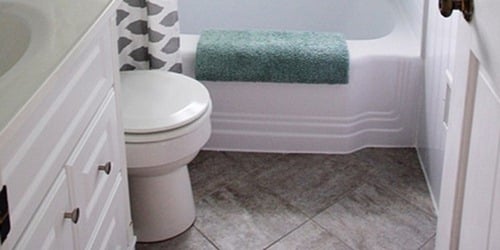 Hello! I’m Amy. I have a degree in graphic design but I love to spend free time working on DIY projects and decorating my home. My husband is Kyle and we have a cute little beagle/lab mix named Sydney. This is our first home and we’ve been here almost three years. Things are always changing as I take on new projects, but it’s always an adventure! I’m so excited to be here today to share our recent bathroom remodel. When we bought the house, the bathroom still had the original orange tile throughout. We lived with it for a couple of years and finally decided it was time to update it with grouted peel and stick floor tiles. My main goal was to create a space that felt relaxing and spa-like and I feel like we did a great job accomplishing that! 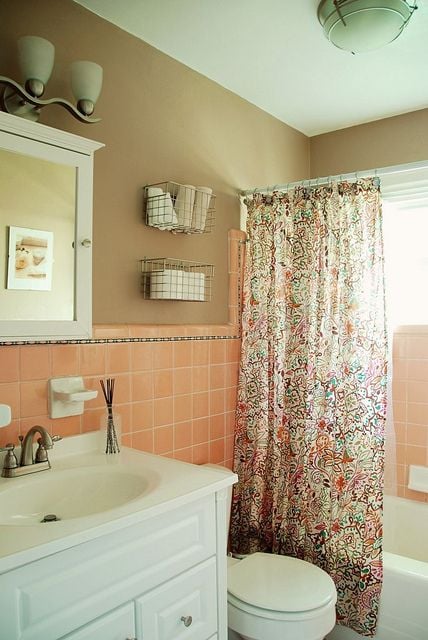 I figure I should probably explain our strategy with the bathroom. We have one bathroom in our house, so gutting a whole bathroom and being without a working one for weeks on end just isn’t possible for us, unless we want to go stay somewhere else, which we don’t. So, we started looking into other options and ended up going with Bath Fitter. They’re able to upgrade the bathroom in basically a day, which is great for us. They were actually out last week to do the install, but had an issue with the shower walls being damaged, so they’ll be back to finish it up this week. 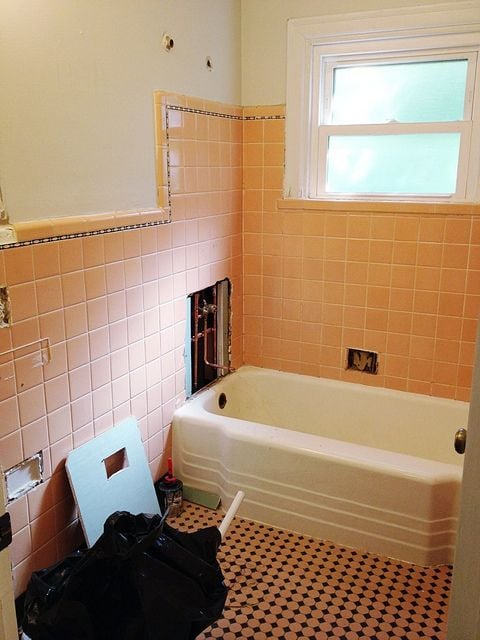 In preparation for them, we removed the vanity and toilet so they were able to tackle the wainscoting. I should say now that I’m very grateful for indoor plumbing. Even one day without a toilet wasn’t very fun. I made a trip to Target pretty much to use the bathroom. I made it worthwhile and picked up some dog food at least! Anyway, back to our bathroom. After the Bath Fitter guys did everything they could do last week, we took the opportunity, with everything out of the bathroom, to install a new floor.

We checked out various options, but in the end settled on grouted peel and stick floor tiles. I did some research and read multiple blogs from people that have used it and people seemed to be pretty happy with it. Most importantly, it was within our budget and within our skill set. 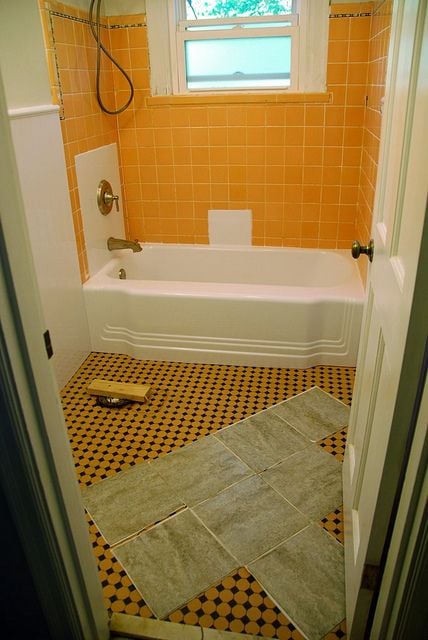 You can see a preview of the wainscoting above. The patched parts in the shower are from putting new plumbing in, but since they couldn’t do the full shower yet, they sealed everything up so we can shower this week! For the tile, we decided laying them on a diagonal was the best option for our little bathroom. It would hide any imperfections with walls not being straight and aesthetically I think it looked better. Above you can see my test run without sticking any tiles down. I did this to get a feel for how it would look and to figure out the best place to start. Generally, I think you’re supposed to start in the middle of the room and work your way out, but since our bathroom is so tiny and some of it is covered with a vanity and toilet, we decided to start from the corner of the doorway, which is the most visible area.

I don’t have photos of the actual tile cutting and laying down because I was pretty focused. We used 1/8″ spacers to keep the tiles evenly spaced for the grout. The full tiles were actually kind of fun to lay down, but once I got to the edges, I had to do measuring and cutting, which wasn’t so fun. It wasn’t terrible though, it just took some patience.

Hubby did the grouting, which was super easy, according to him. I followed with a sponge to wipe up any excess grout on the tiles. If I were estimating, I would say laying the tiles took approx 4 hours and the grouting took maybe 30 minutes. 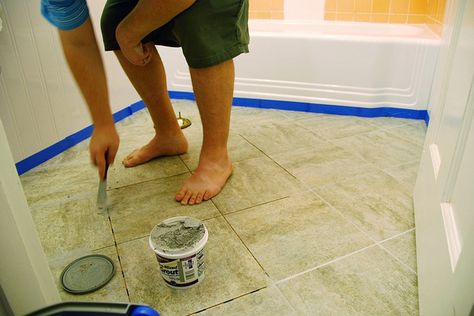 Here she is looking all pretty and new. We’re really pleased with how the floor turned out. It looks so much better than I expected and it feels just like real tile. I think the grout really helps with the tile aesthetic. I have to admit I wasn’t really a fan of laminate flooring before, but grouted peel and stick floor tiles have come a long way. 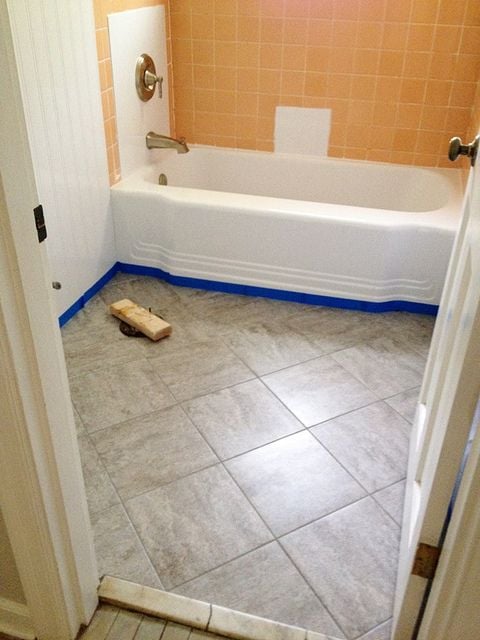 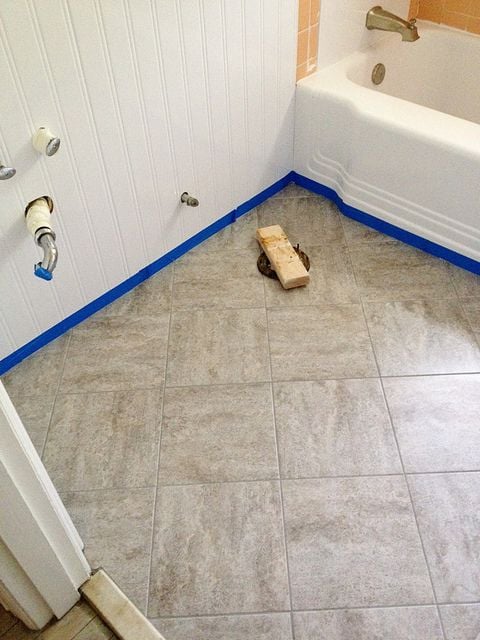 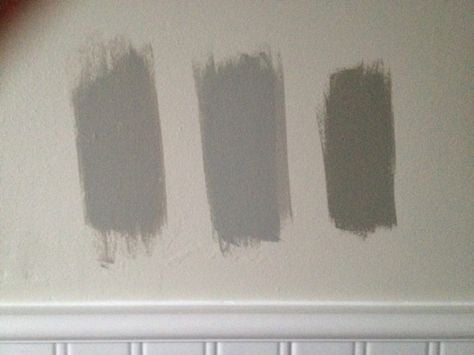 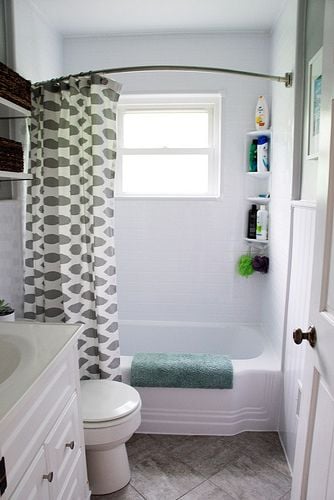 I’m doing a little celebration dance over here! The bathroom remodel is finished! Every good reveal needs a before and after! Here’s what we started with when we moved into the house.

We made the orange work for a while with some paint and accessories.

I think those photos speak volumes about how much paint and accessories can help a room. But we have been wanting to update the bathroom since we moved it. It was just too dated for our taste, so we finally did the big remodel and are really happy with how it turned out. It flows much better with the rest of the house now. 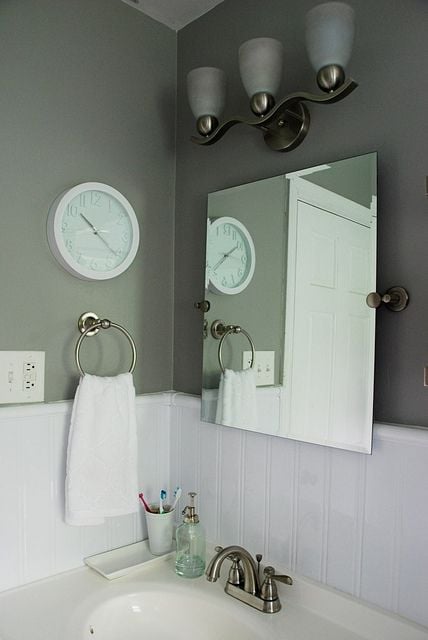 A new mirror was a priority on my list. I wanted to get rid of the medicine cabinet that was small and had chipped corners. Since the wainscoting sticks out from the wall, we needed to find a mirror to accommodate that. A tilting mirror turned out to be the perfect solution and we were able to get more mirror coverage that way. We also added a new towel ring to hold a pretty white towel. 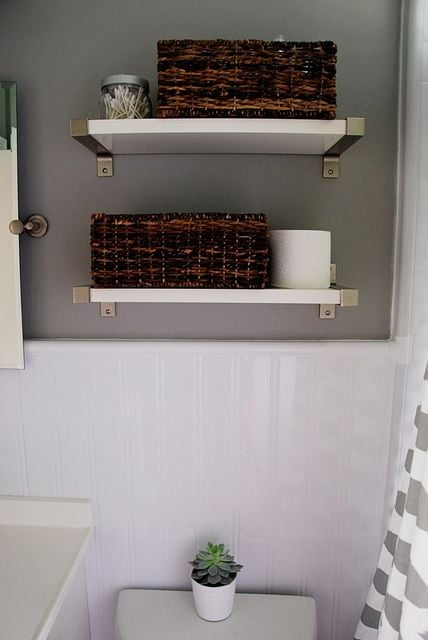 After removing our medicine cabinet, we lost some vital storage, so we added two shelves above the toilet. Baskets bring in a natural element to the room, while concealing all of our bathroom necessities. The shelves also provide space for extra toilet paper and a jar with q-tips. A cute little succulent sits on the back of the toilet to add some color and plant life. This is my first one, so I’m hoping I can keep it alive!

On the opposite wall, we have hooks for towels. I also framed a print from Etsy. Thanks for your suggestions! I ended up going with the one most of you chose. I love it in here! 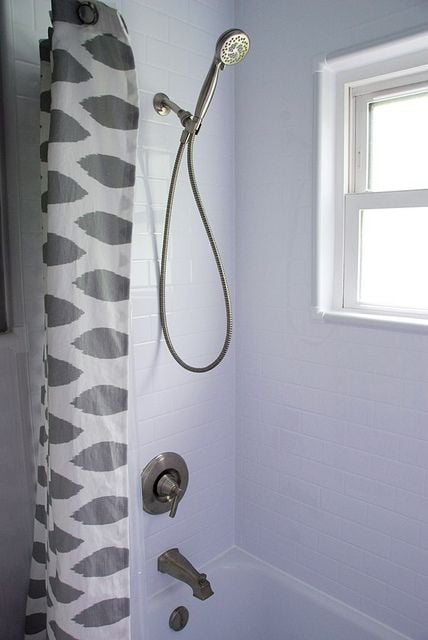 We went with a subway tile look in the shower area and took it to the ceiling to make everything feel taller. New plumbing and fixtures were another exciting thing. You can see in the photo at the top, we also got a curved shower rod, which is awesome! It makes everything feel so much more luxurious. 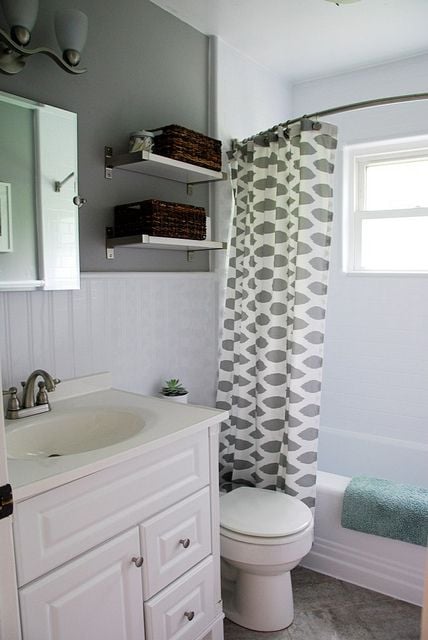 I made the shower curtain myself. I was hoping to share a tutorial for you, but I had some setbacks and the process took way too long, so step-by-step photos didn’t happen. Here are my quick thoughts on DIY’ing a shower curtain. I only recommend it if you cannot find one you like in stores. I absolutely love the way ours turned out, but I have no plans to make one again, ever. Since most fabric doesn’t come in a standard shower curtain width, I had to sew two panels together. It was a tedious task to make sure the pattern lined up. I also had some issues with my sewing machine deciding it didn’t want to work during this process. After getting everything sewn, I decided grommets would be the best option for the shower curtain rings. The grommet pliers broke half way through this part and I had to make do with broken pliers. I got it finished and it looks really good, but I think the entire curtain making process took me about 6.5 hours. In the end, I spent just as much, if not more, than just buying one from somewhere like West Elm. Again, I love it and I think it makes the room, but it was a blood, sweat and tears project!

Another new feature is our corner storage. I love that we don’t have to use a caddy over the shower head anymore and that everything is in one spot. I should also mention the new bath rug. After striking out on two options, I was able to find one that coordinated well with my towels but didn’t conflict with the pattern in the shower curtain. I think that sums it up! It feels so relaxing in there now and I think I captured the spa-like feel that I was hoping for!

What do you think of the grouted peel and stick floor tiles option?

You can also find other great bathroom tile remodels with these image links. 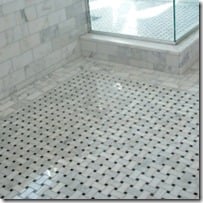 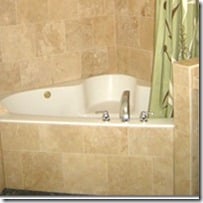 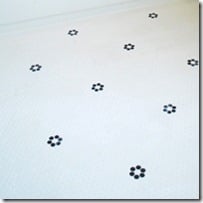 We love hearing from fellow Remodelaholics, so let us know what you like about this and leave any questions below in the comments. If you've followed a tutorial or been inspired by something you've seen here, we'd love to see pictures! Submit pictures here or by messaging us over on Facebook. 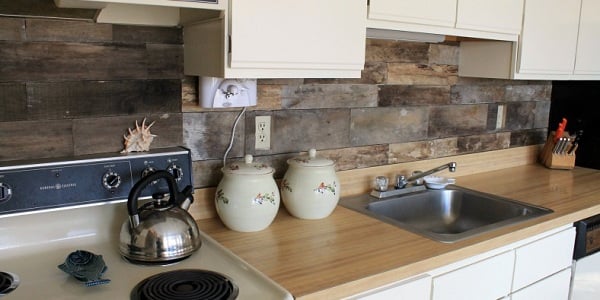 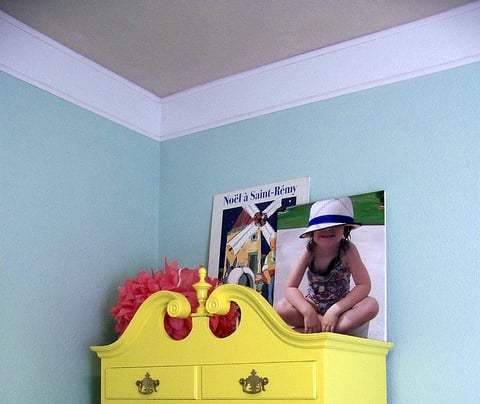 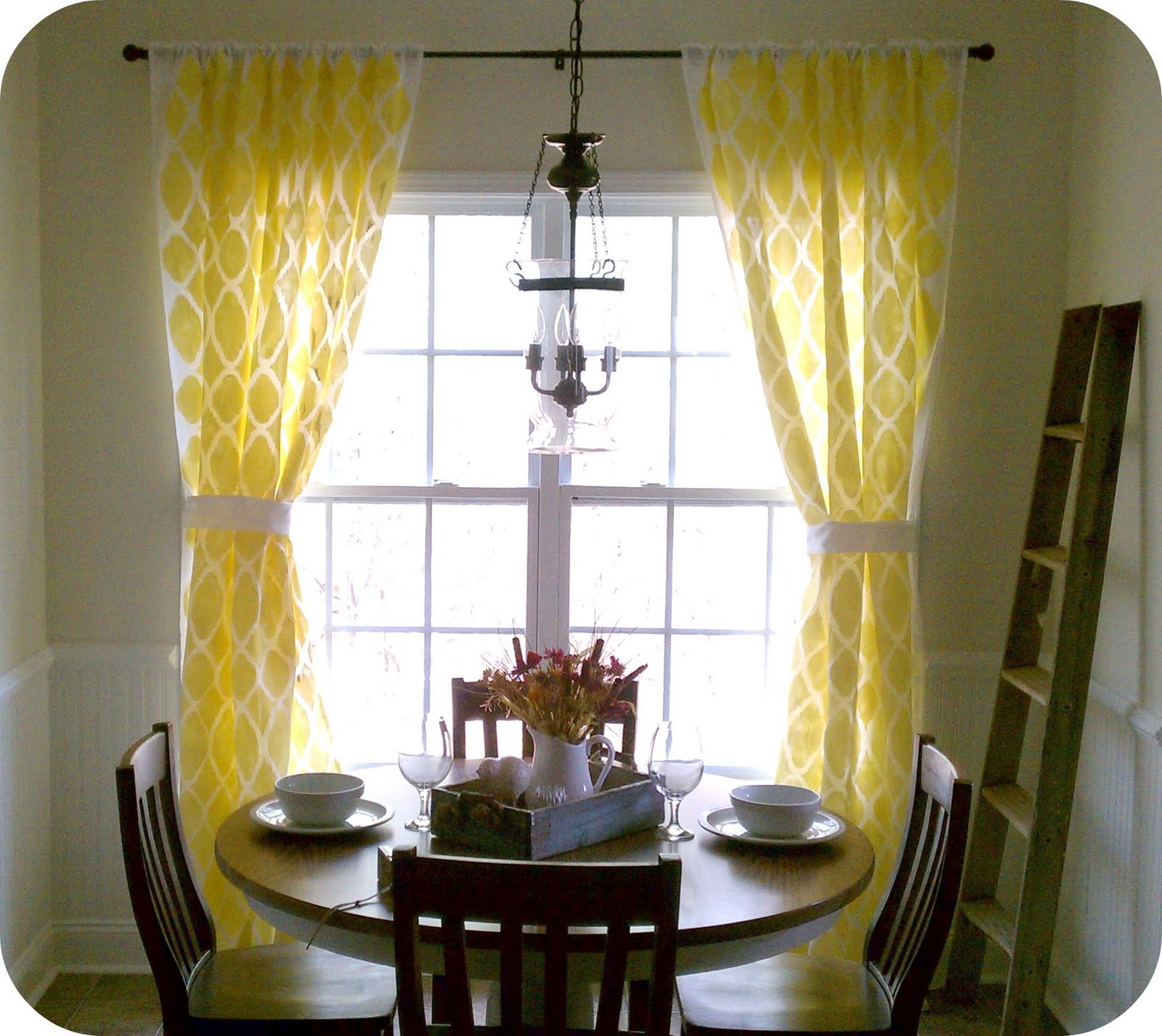 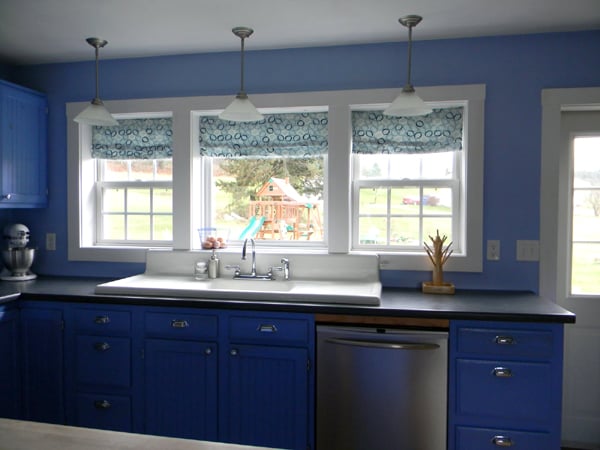 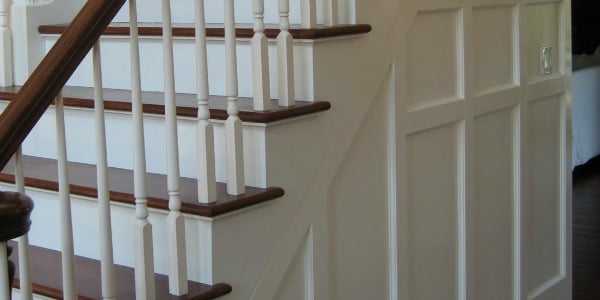