In the tradition of projects, these three alteration projects took up last Thursday. It was so fun to sew again. I really haven’t made much of anything for so long.

The first is a plaid summer dress from my sister. This is part of the maternity clothes collection that was passed to me! Yahoo! Only one problem, I am the tallest girl in the family, by 3 inches, to my tallest sister. Noelle who sent me this is 5’5″, so I really needed an extra 5 inches of fabric, in order to move around with out exposing myself. So here is what I did:

I added some scrap fabric I had to the bottom, but then it didn’t look finished, so I added a band around the upper waist. I am really excited for this now! I think it looks so summery! 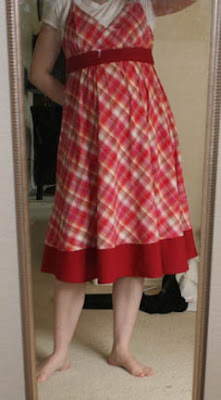 Then for my birthday, I picked up this adorable knit dress at Walmart. I think it was only $14.00- dang good deal. And it looks so cute for maternity, but again, I like it just a little longer.
I used another scrap of I had of black knit, and jimmy-rigged a hemline that matched some of the other details. This was a little harder, because I didn’t have a serger, and the other ruffles, were finished with a serger, but I think it sorta worked out. I wore it to church on Sunday! 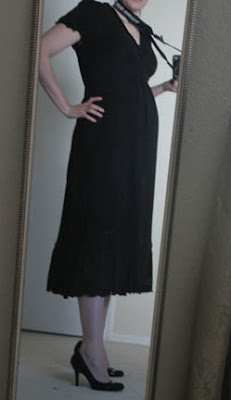 I hope you can see the ruffling I added. It is hard to tell with the black knit, what is going on. 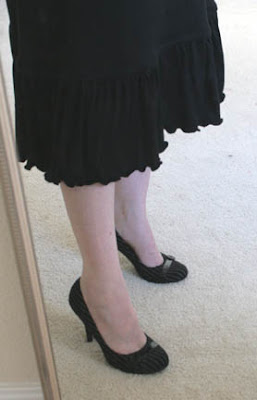 And I just had to add the picture of Kitty checking out the handy work! She is so cute and fluffy! 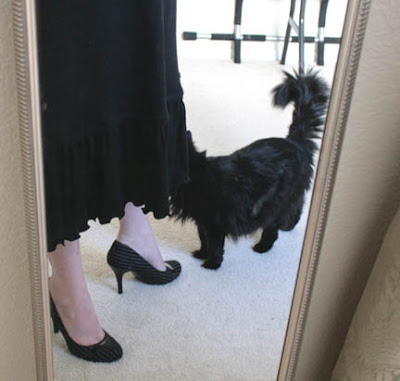 Lastly, I wanted to make some maternity pants, that didn’t have a waistband that was tight- meaning no elastic at all!! I am so anti-waistbands right no I can’t even tell you. I went to the local Salvation army and bought a pair of jeans (on a 50% off day- so $3.50, score!) They fit my legs and thighs, then I just sort of experimented with finishing the new knit waist band.

Next time I won’t cut off the back waistband, I am not sure why I decided to do it this time, but live, do, and learn.

First, I pulled them on and pinned around the curvature of my new belly. 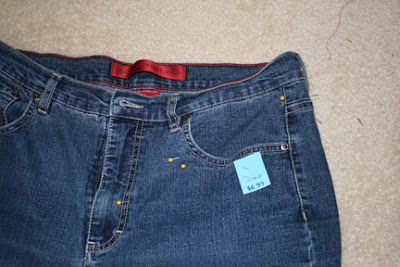 I cut off the top of the pants along that curve. 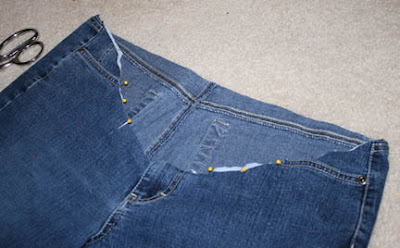 Here is my belly with them cut off so you can tell what I mean about cutting bellow the new curve of my belly! 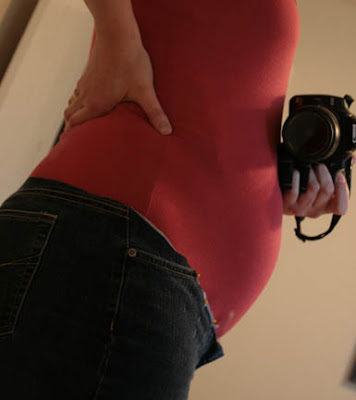 I then measured the width of my belly (only on the front from side to side approx 22″, and the height I’d like the band to go.
For example, from the lowest point, I wanted the band to be 7″ tall, but from the side I only needed 4.5″. I folded the knit fabric in half, the height I needed it to be. 7 inches. That fold will be the top of my band.
Then I laid the pants below the fabric the now measured 20″ wide and 7″ folded (or 14″ long) and eyeballed the curve as I cut from 4.5 on the side to the center lowest point of 7 inches. Then folded that first cut half over the other un-cut half, and used it as a guide for the other side. (hope that makes some sense)

I then cut a band for the back, and sewed the sides together, and folded the bad side in and pinned them to the outside of the cut pants, like so: 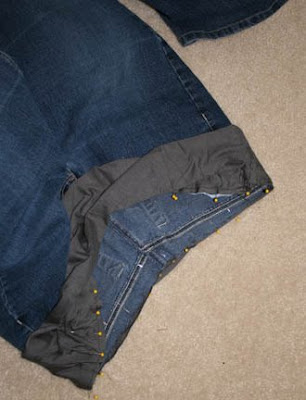 When I was done sewing the pined area on, this is what I had: 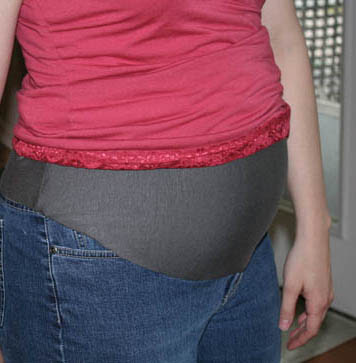 And with a shirt pulled low over it, you can’t even tell! 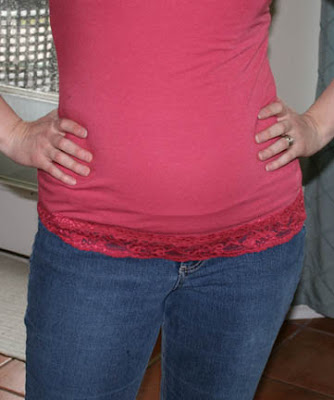 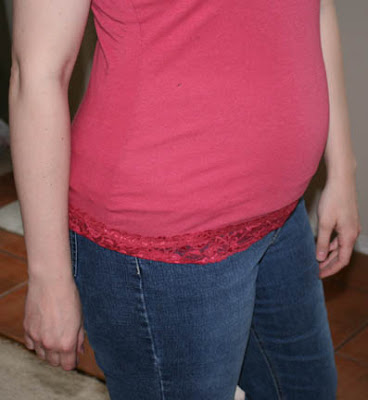 I might try this again…. later.
For now we are on to other projects!
Remodelaholic is a participant in the Amazon Services LLC Associates Program, an affiliate advertising program designed to provide a means for sites to earn advertising fees by advertising and linking to amazon.com. Please see our full disclosure here.