Submitted by From Gardners 2 Bergers 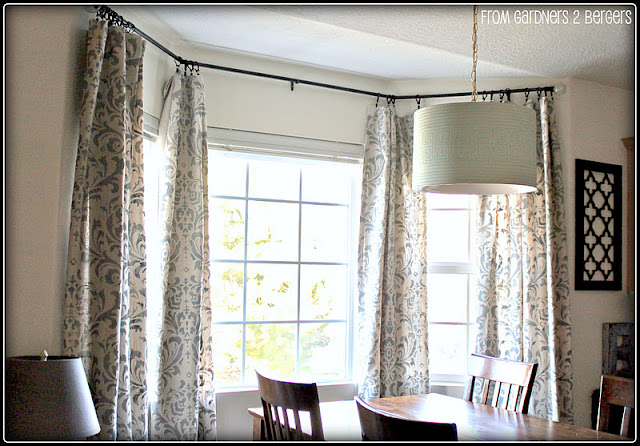 Here’s the promised tutorial for my stenciled curtains!
I love this project! It was quite a bit of work because I stenciled 6 curtain panels!
Sounds like a lot of work, right?
Let me tell you, it was 100 percent worth it and I’d do it again in a heart beat!Why? I needed a large quantity, 6 panels to create the looks I was after. This way I got exactly what I wanted: a beautiful damask curtain on a linen-like fabric with the exact shade of gray I wanted. In my eyes, you cannot beat it!
First, here’s a few pics of my inspiration curtains. 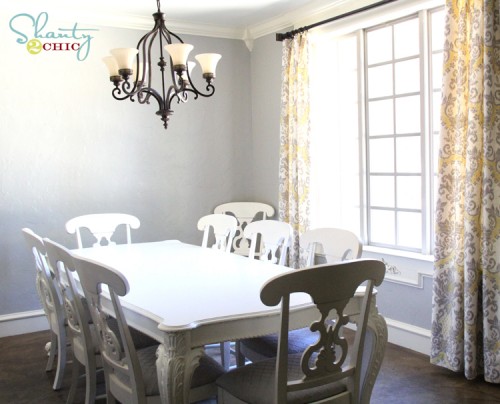 This is from Shanty 2 Chic and the fabric is Waverly Bedazzled in Silver. Love it, but it costs $30 a yard (sometimes it’s on sale for $20). Um, thanks, but no thanks. 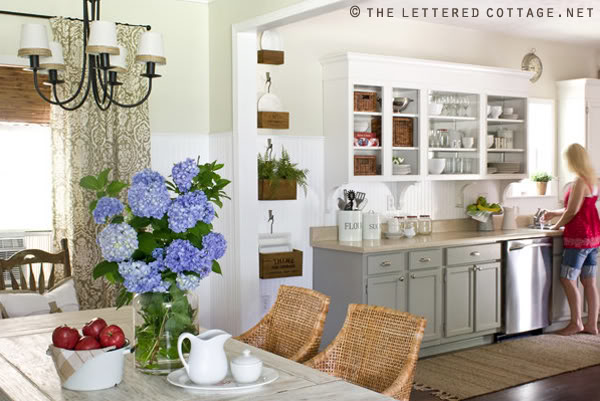 You can kinda see these curtain panels from The Lettered Cottage in this pic. Similar feel, right? Cream and “greige” on a textured cotton or linen, beautiful and vintage-y. 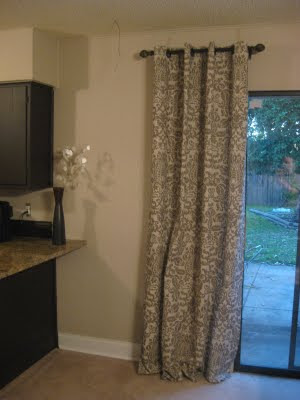 Last, but not least-Stephanie’s curtains- from Frugal Home Ideas. {PS she’s sharing a no sew curtain tutorial on that post}
I choose a damask pattern because I wanted something that looked a little aged, and I thought Anna Damask Allover Stencil from Cutting Edge Stencils would do that perfectly.
When I add something new, I am always mentally trying to balance something new {looking} with something old {looking}.
I want a room that looks both modern and vintage. For me, damask equals an aged element. I also wanted a soft, scrolling pattern to balance all the hard elements in my space- the metallics, the modern lines, and the typography everywhere.

I’ve done some stenciling before {like the Greek Key Fabric stencil I made}, but I watched the tutorial from Cutting Edge Stencils, just to be certain I didn’t have any mishaps. Since I was doing a product review, I wanted to make certain I was reviewing the actual product and not my user error!
[1] Lay out your fabric on a flat surface with paper or cardboard underneath, something to catch the paint that may soak through the fabric. 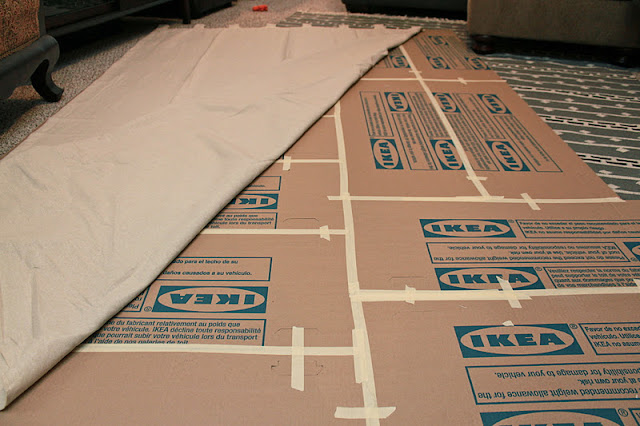 I created a faux flat surface for my stenciling by using a zillion pieces of free cardboard from Ikea. I knew I was going to have 6-8 panels to paint, so I figured that good surface preparation was worth it. {Yeah, I use Ikea’s free supplies- All. The . Time.} 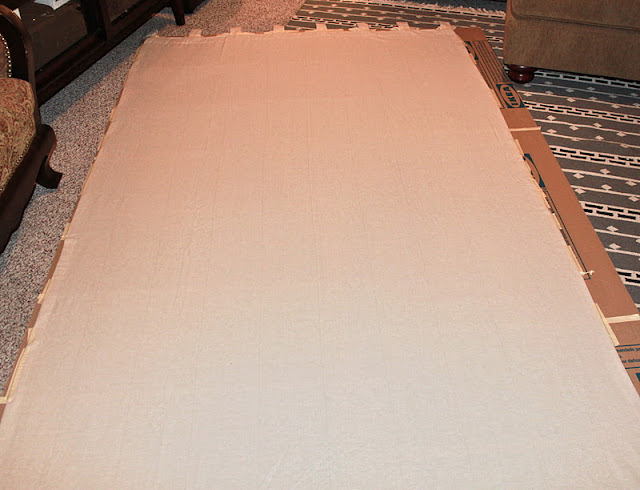 [2] Tape down all the side, making sure the fabric is laying flat and not pulled or stretched in any way.
The better you line up your fabric and secure it, the better your results will be. Prep work is uber important. 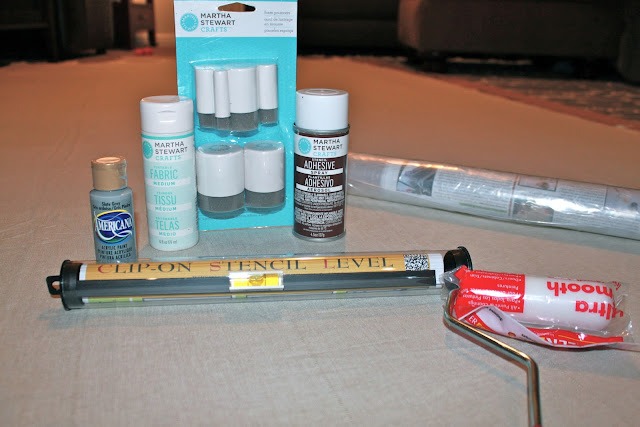 [3] {If you haven’t stenciled a lot before now, watch this video.}
Prepare your paints following the mixing directions. I used Americana in Slate Gray and Martha Stewart’s Fabric Additive for paint. See that little gray dot? That was my only test swatch on the fabric. In hindsight, I’d say I’m lucky I like the end result as much as I do! Ack! 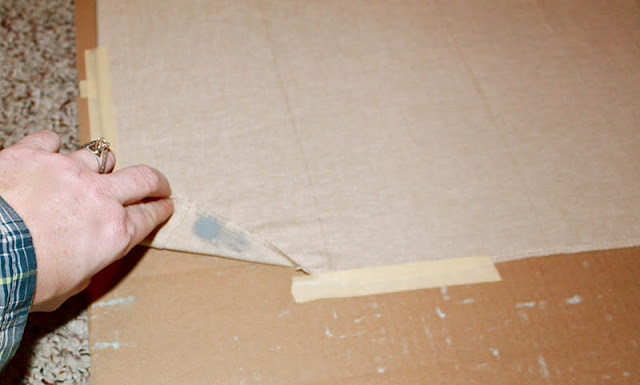 [4] Spray the back of your stencil with stencil adhesive, this is especially important if you have a very detailed stencil with a lot of open cutouts. The more you move the roller to paint all that pattern, the easier it is for the stencil to shift. With the stencil spray adhesive I didn’t have a single problem with the stencil shifting.
I followed their directions {from the video} about how to load the roller for stenciling and how to roll off any extra paint {see the paper towel with paint on it?} And guess what?! I did not have any paint bleeding under the stencil for my whole project!! 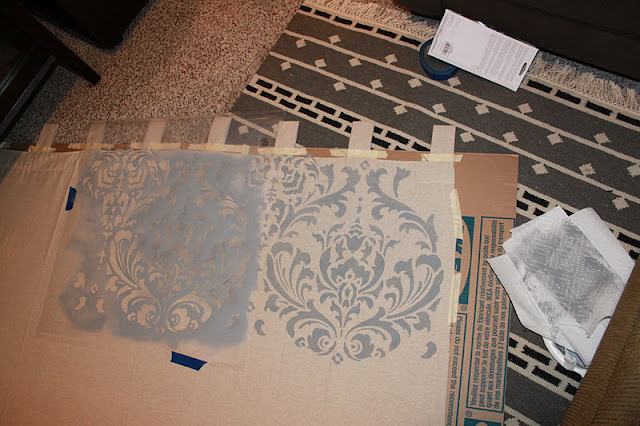 [5] Use a roller to do all-over stenciling like a damask, space out your stencil- you know, plan your attack. I started the top of each panel with the same part of the stencil for each of the six panels, so when you look across the room the pattern would line up.
I used the roller from Cutting Edge Stencils and it worked very well! It’s different from other rollers in that it has a rounded end and is made of the perfect foam density for stenciling. 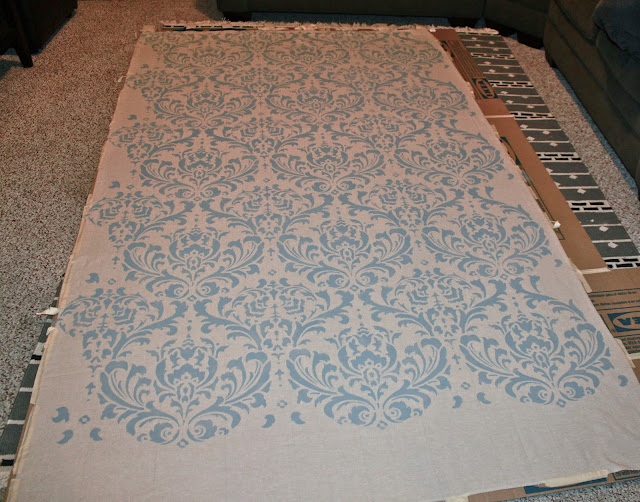 [6] Go back to fill in the top, bottom, and sides. Make sure to line up the stencil with the cutout indicator marks. 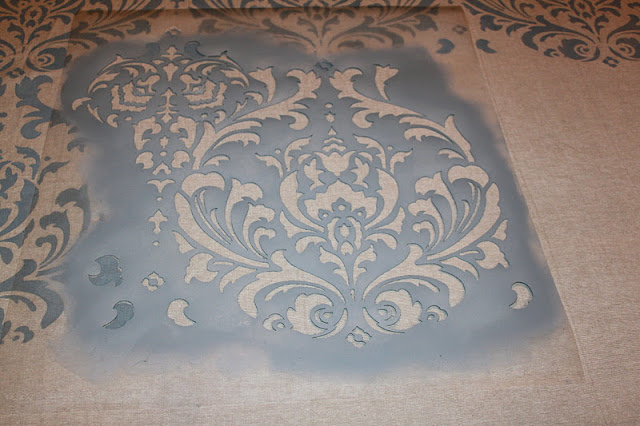 You can see  how the cutouts line up perfectly with the already stenciled curtain. This was at the bottom of the curtain and everything still lined up perfectly. I’m telling you- taping everything down is super important! 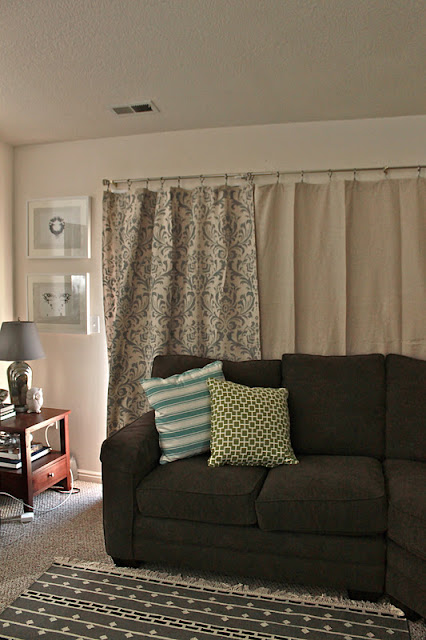 [7] Let your curtains dry overnight, at least, then iron them to set in the paint. Since mine were the Lendacurtains from Ikea they also needed to be either hemmed or ironed with the fabric tape to create a hem. Not bad for 10 bucks a panel.

Here’s a pic of the difference between one painted and one straight out of the package. {I love my stencil!} 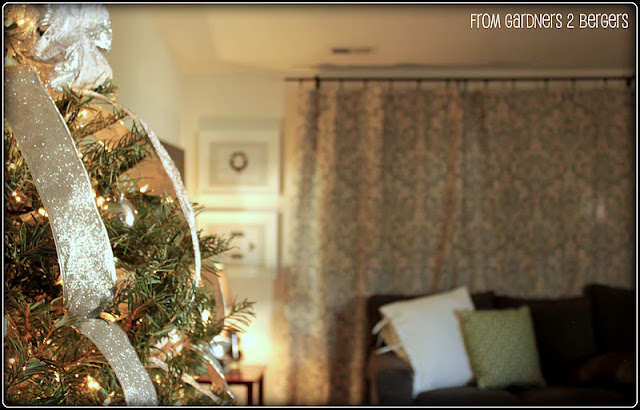 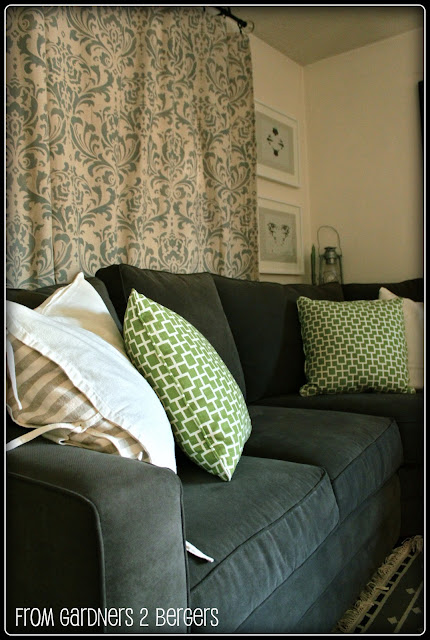 Would you believe I did not have a single mishap using this stencil, not one “oops”, or “uh-oh”?! You know I need at least two tries to get a project right almost every single time I try one- well not this time!! Slow and steady, friends- slow and steady!
There was one setback- none due to the stencil or the stencil painting process.
I didn’t know how much paint I would be using AND even if I did, I still bought out every bottle in each store that sold them locally and therefore, ended up running out {three times!}
So, now YOU know, for a stencil as complex as a damask- you will need 2 bottle of craft paint per panel, ok? OK.
My only other negative comment, cleaning the stencil is so not my favorite. There, I said it. It just wasn’t fun.
Now, for things that rocked… 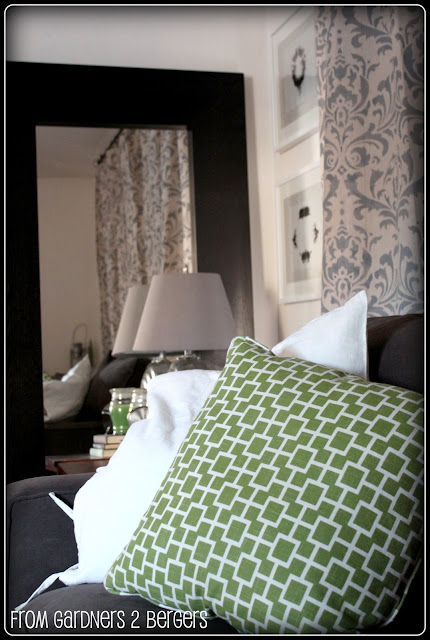 First, the overlapping stencil was nearly impossible to mess up. The indicator cutouts telling you where to line up the stencilworked great. Not a single problem and I had to move the stencil between 20-30 times per panel! I know what you’re thinking… sounds like a lot of work, but it totally worth it and with the roller it went pretty quickly.
Second, look at how crisp the lines are! Isn’t that awesome! You cannot tell that the curtains are painted. There was NO BLEEDING under the stencil!! NONE!!
Wanna see some befores and afters?  I think the dining room is a more dramatic change, since there were no curtains before. I LOVE the change!! It feels so much softer and a lot less like a condo.
BEFORE: 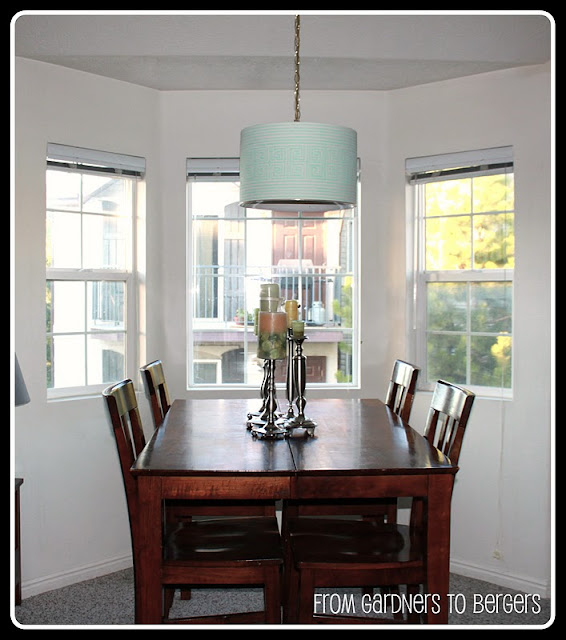 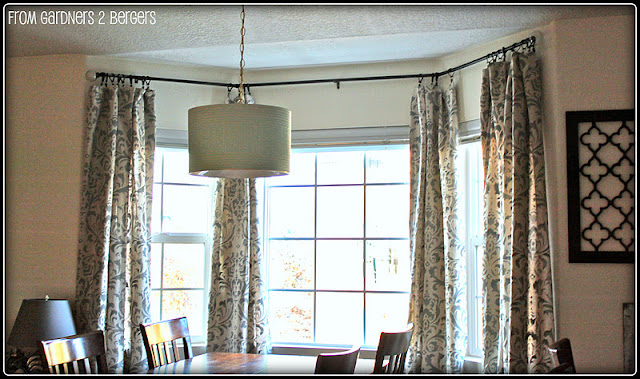 This angle probably bothered me a TON more than it could any of you, since you’re not living in the space. The prior curtains were silk- nothing to complain about right? But they were way to plain with white builder paint and I was dying for a change. This was worth the wait, I love them!
BEFORE: 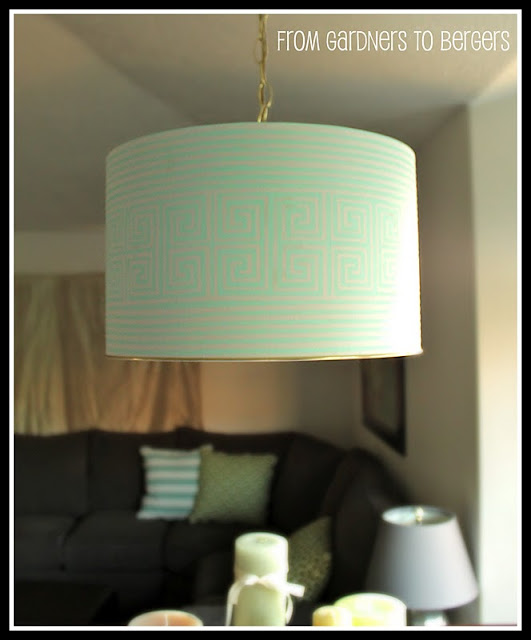 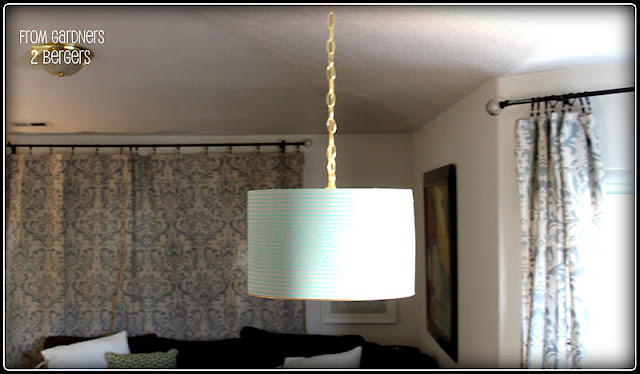 It took me 1-2 hours to complete each panel. I think I am probably a slow “stenciler” {stenciler=one who stencils, probably not a word?}, I had a feeling I would be. I just get so precise when I’m doing a project. Great results are worth the time spent, as 6 custom curtains would have cost some serious coin. 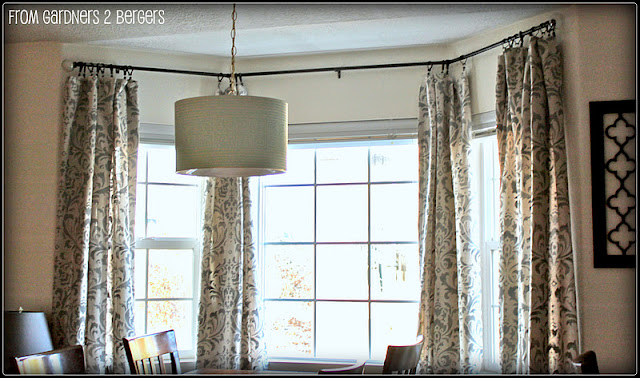 I am a little obsessed with making things so I can get exactly what I want. I don’t mind putting in the time, better that than money and then I get the exact look I’m after. I love my end result and already have another stencil idea swirling around in my brain! 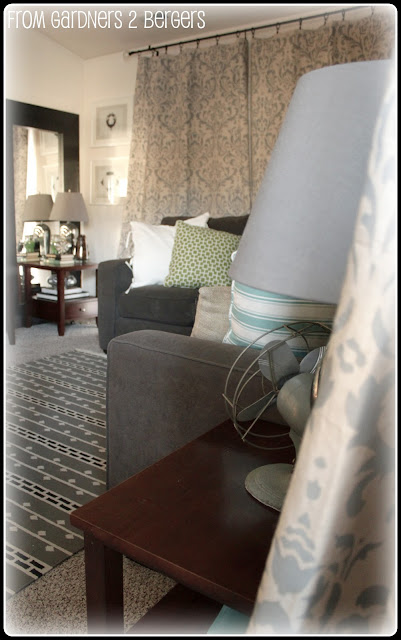 Everyone that has come over since the panels have slowly made it up cannot believe they are painted! I almost can’t either- except for you know, all the hours I crawled around the floor on cardboard with roller in hand!
Would you believe I also made the curtain rods? Another tutorial, for another day!
Thanks for reading!

What a lovely result from all of Becca’s hard work!  You can view more stenciled projects below: