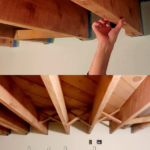 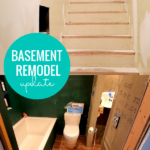 We’re renovating the basement in our 1960’s house! See where we’re at now with the basement remodel, what we’ve done so far, and how we plan to modernize this basement, including the exposed ceiling beams.

See the other projects we’ve done in this home (the Birch House) here, and catch up on all the Birch House basement progress here.

Please subscribe to our channel to keep up with our vlog updates as we work on the basement, plus new plans and other DIY ideas.

As you can see in the video and this basement intro post, we’ve already done a lot of the demo work to get this basement ready for the remodel.

Right now we’re working on a few different areas, for a total of 4 rooms plus the storage room.

In the video I show you a little bit about how we’re updating:

When we installed our new wood flooring upstairs, it raised the floors a bit. This made the top stair of the basement staircase extra tall, and there was already a stair that was shorter than the others. 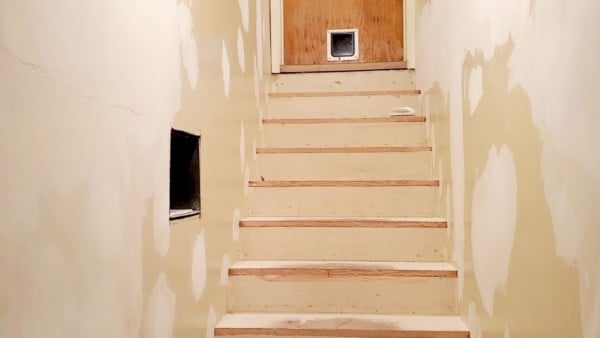 To fix that, I’ll be raising each stair an inch or two so we have a nice even distance between each stair. We’ve already removed the 50-year-old carpet, so we’re ready to roll on the staircase remodel!

We’ve remodeled stairs before in our Park House, so be sure to check out those posts here if you’re ready to remodel and needing some inspiration!

Like all older houses, our Birch House needed some electrical work updated.

Once you know the basics and feel comfortable with electrical work, updating basement electrical can absolutely be a DIY job — but if you aren’t sure or have any concerns, always consult a professional! 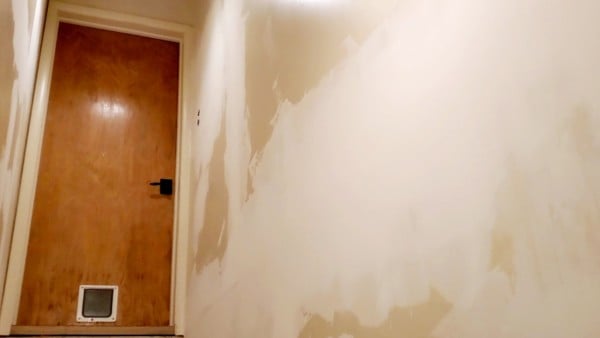 I’ve updated and patched everything so that the stairway walls will match the smooth drywall texture we prefer that we’ve been updating here and in the Jordan House.

As we updated the pipes, we also moved some to accommodate the exposed ceiling beams better (more on that below).

In a older home remodel, reaching the point of painting is so exciting! It means you’ve done the work inside the walls so you’re ready to do more of the fun stuff.

We’re painting our go-to color: off the shelf white paint + primer (from Behr). Sounds boring, but it’s our favorite because it’s easy to match and works great in every space we’ve ever used it in. 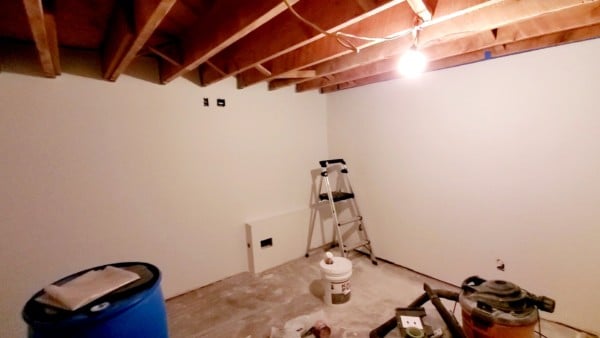 White walls leave plenty of opportunities for adding color and texture through decor (like our yellow Swedish clock!) or other elements like board and batten, painted doors, or even a DIY wood barn door like we built here or upgraded here from an existing door.

Just like you can see upstairs, we decided to expose the wood beams in the ceiling in the basement. (We had thought about covering up the ceiling, but changed our minds.) 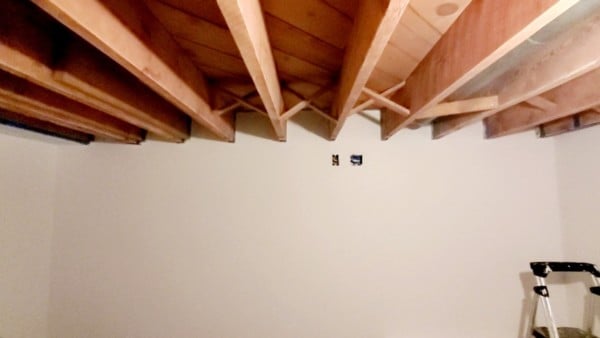 On the main level, when we opened up the ceiling, we found that we had two roofs — so the exposed beams upstairs still have a layer of insulation above them, woohoo!

The joists are at 7 feet, so the added open area we gain by not adding a traditional ceiling gives us a visual more like an 8-foot ceiling.

Our floor joists in the ceiling are nice and thick (2 inches) and have some fun texture and detail, so we sanded them to make them a feature. 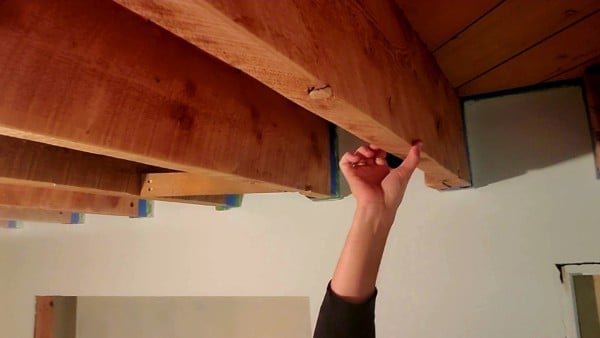 To add back some fire safety, we also sprayed them with a fire retardant — so we can have some additional fire protection but also a really nice visual.

When the walls are open, it’s a great time to plan built-ins! We’ve framed in a nook for a TV, with an electrical outlet, so we’ll be ready for a basement family room.

Or we might use it for the piano — haven’t decided yet! 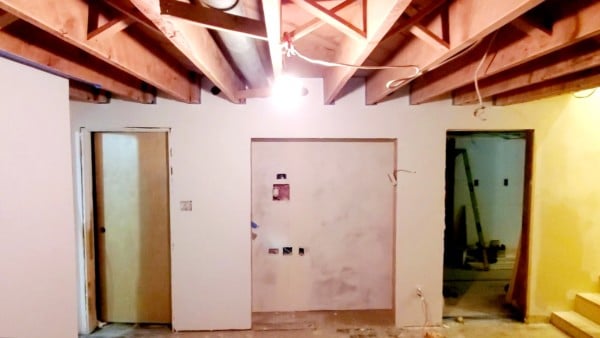 Since we made some changes to the layout, we installed new doors, too! We chose solid birch doors to match the doors on the main level (and the house’s name ;). 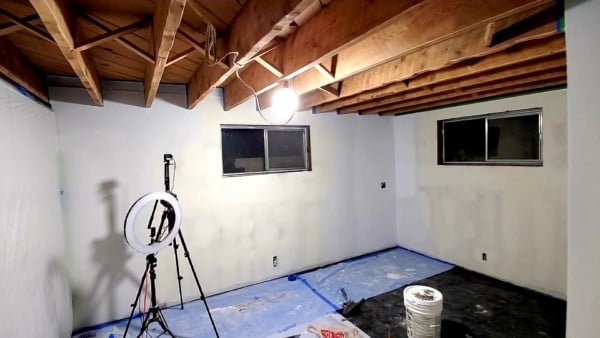 We’ve also ordered some new windows, so once we receive those they’ll be installed (like the new window we already put in the bathroom). Then we’ll be ready to finish up drywall and trim.

What used to be a scary closet with just the toilet is now an expanded full bathroom with a tub. So much work but we’re so proud and happy with how it’s going. Tile and more coming! 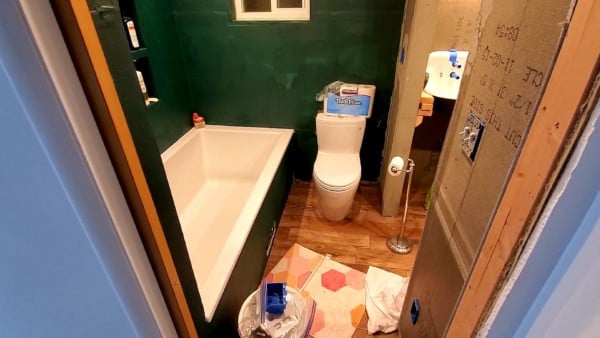 We’ve ordered the carpet, so we’re working on doing what we can where we can, before that arrives and is installed. The life of a Remodelaholic, working hard between working hard some more!

Don’t worry — we do take breaks! See our tips for how we stay sane while remodeling.

Be sure to subscribe to our channel to see the latest updates on our basement remodel — we have so many great projects and so much useful info to share once we can take a breather from the work and do some more video editing.

Leave us a comment with any questions you have or specifics about what you’d like to see more of in this basement remodel!

Pin this to remember and save for later, too! 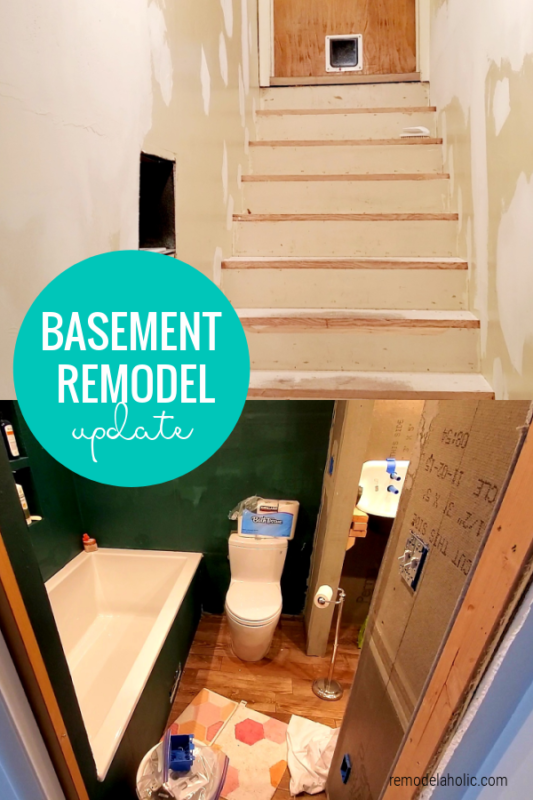 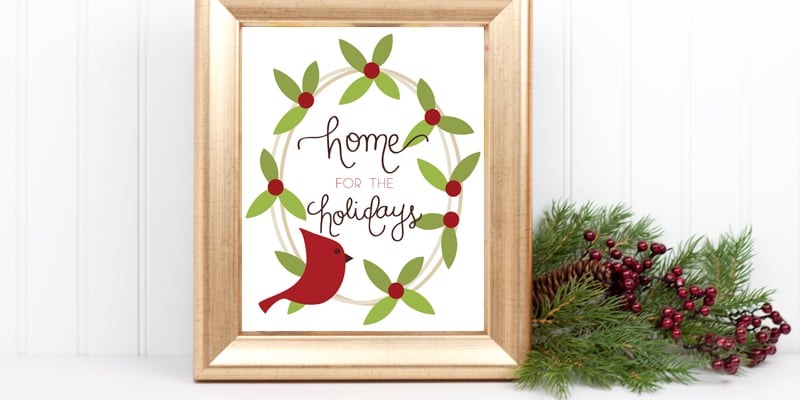 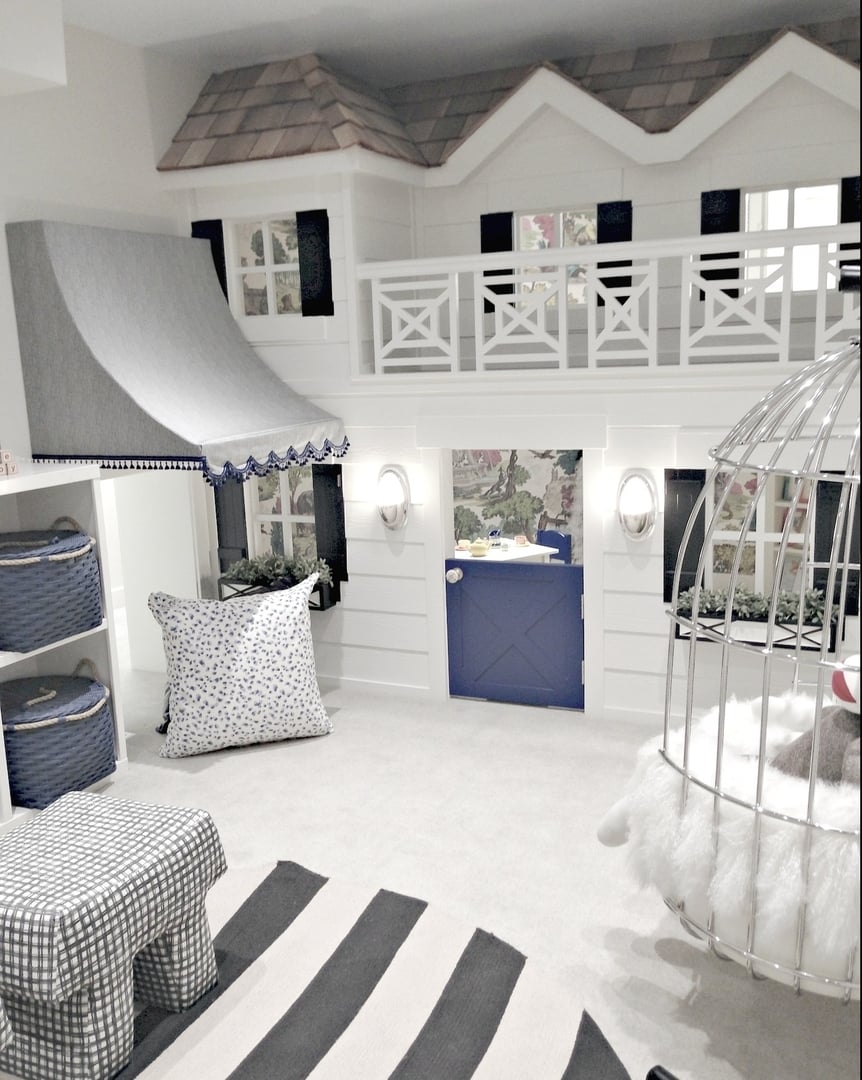 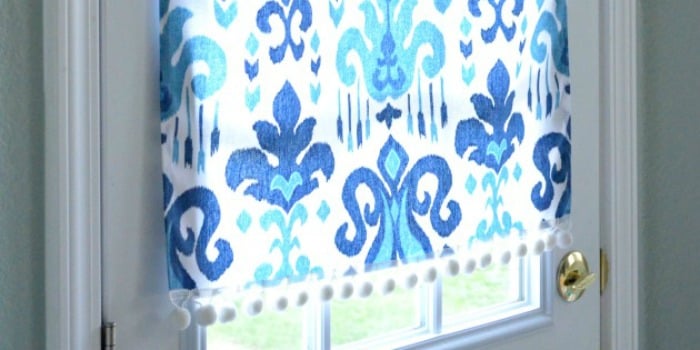 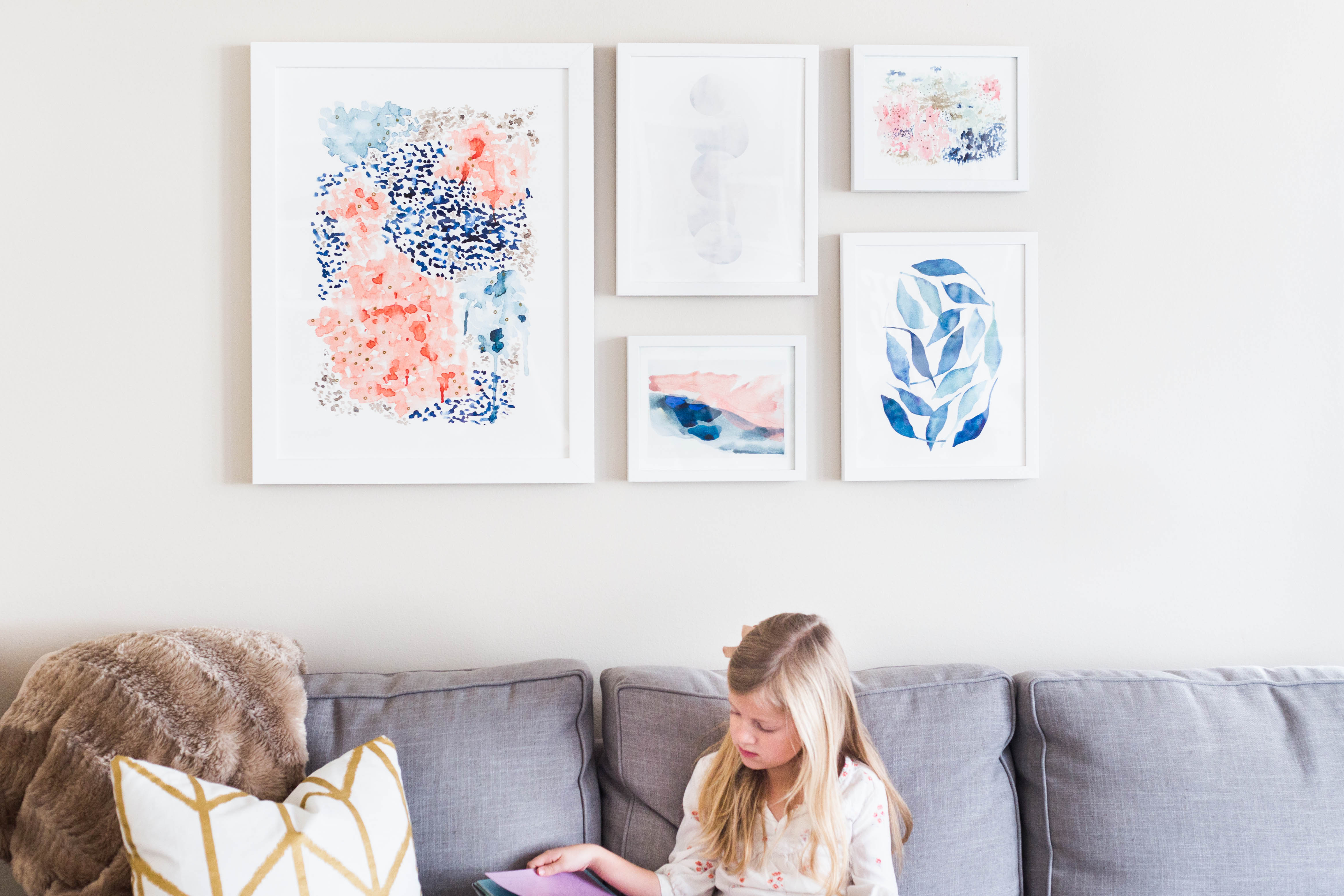 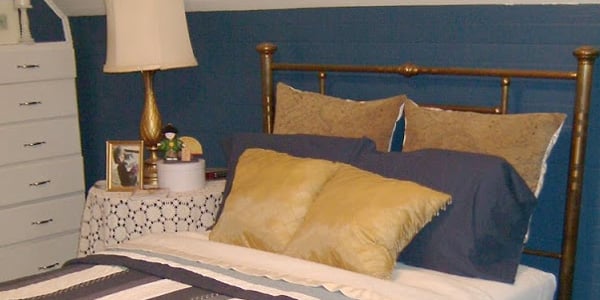