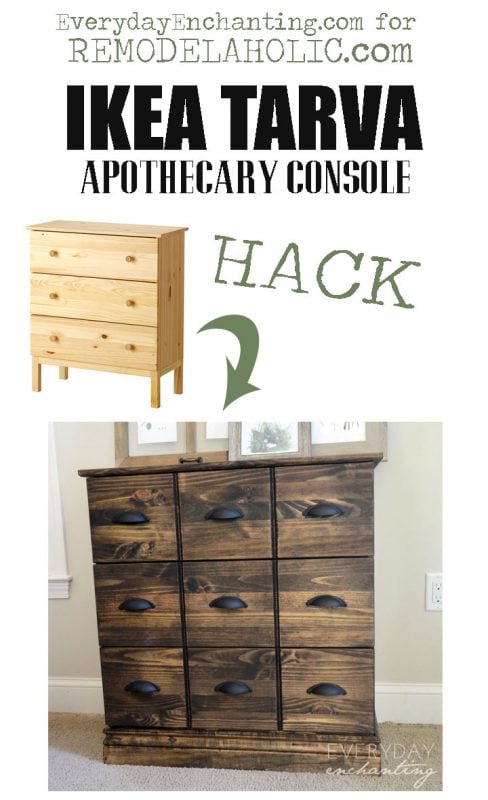 Hey Remodelaholics! Nina from Everyday Enchanting here to show you how I updated an Ikea Tarva Dresser and transformed it into a gorgeous and inexpensive knock-off of the Pottery Barn Apothecary Cabinet! This is my second Pottery Barn knock-off, we also built a custom sink console, which you can read about here! 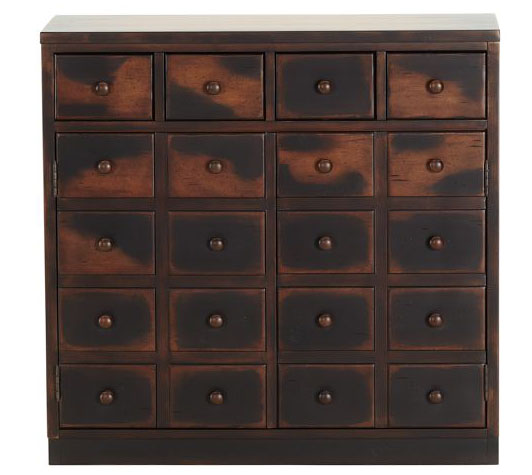 Unfortunately, the $800 price tag is very much beyond my budget. This is the case with most of the furniture I fall in love with- it’s what ultimately led to me becoming a DIYer and then later a DIY blogger! This is what I love to do- create a high end piece from either scratch or a less expensive (but sturdy) piece! 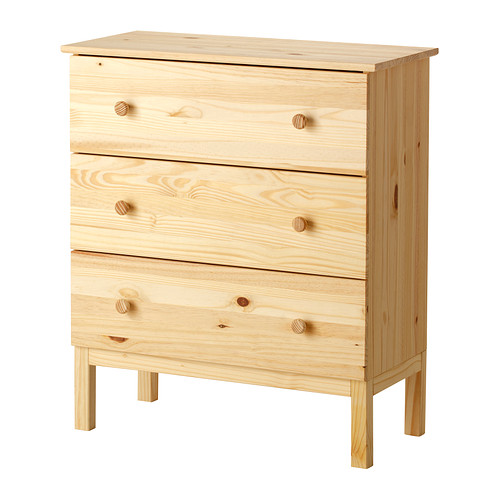 The Ikea Tarva unfinished dresser is much closer to my budget at $80. Contemplating the photo, I realized that it would be possible to create the look for a fraction of the price of the PB version by purchasing the dresser, and using some items I already had to finish it up with the look of an apothecary cabinet. 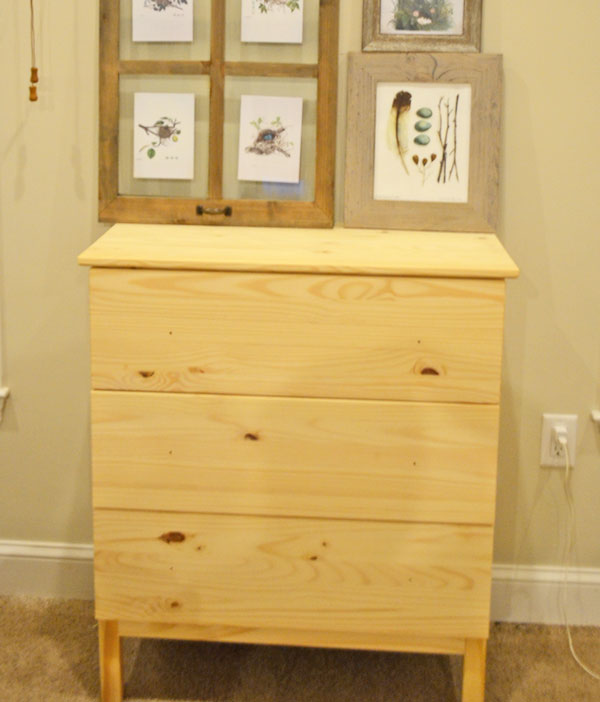 I ordered the Tarva and assembled it as soon as it arrived. I followed the instructions completely, even though I knew I would be taking some parts back off- and assembled the entire dresser. 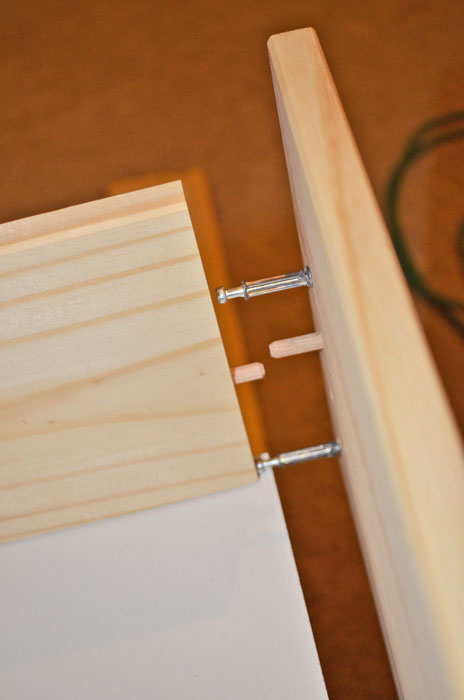 When it came time to do the finish work, I unlocked the cam lock screws and removed the drawer faces. 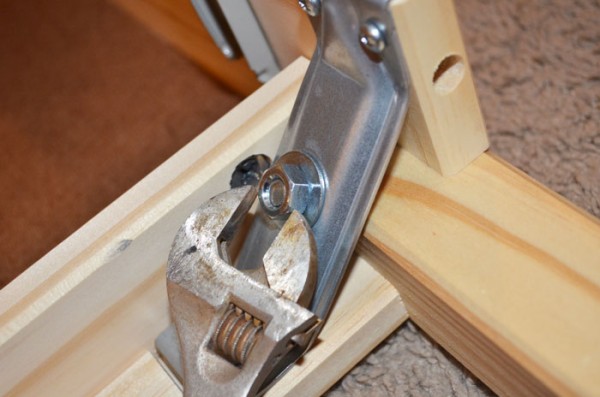 I also removed the legs, since they would need to be cut down to accommodate the trim better. 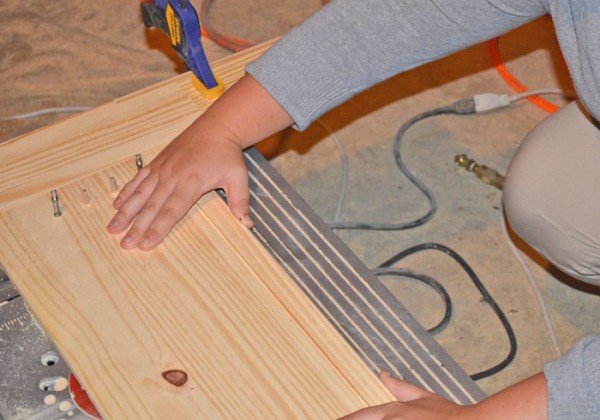 As you can see from the photo above, the PB version has faux-drawers which appear to be panels added on top of the cabinet faces. I opted to use the router to add evenly spaced grooves to the drawer front instead- which ultimately saved the expense, time, and hassle of purchasing wood and adding the panels. We measured out two evenly spaced areas to add the groove, then used a 3/8″ roundnose router bit and router table to add the detail grooves. TIP: Make sure to do a test run with a spare board and the router to confirm your measurements. 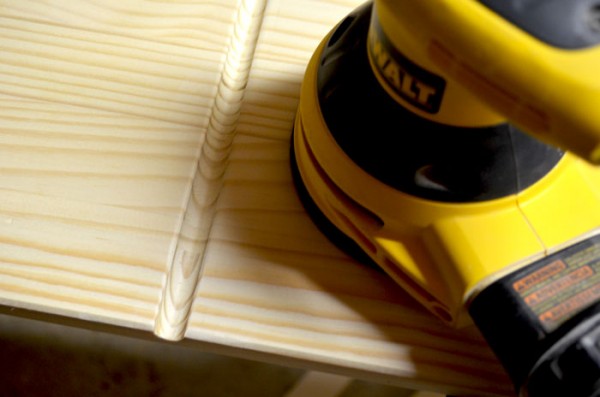 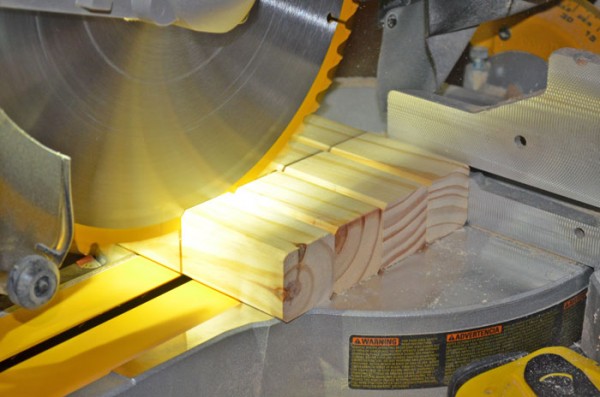 Next I trimmed down the dresser legs and reattached them to the dresser. 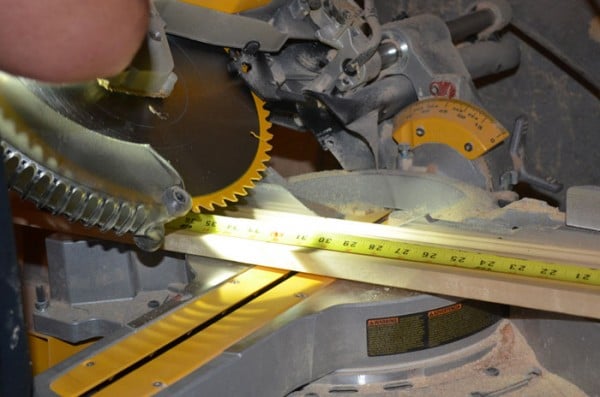 Next we cut the base trim at a 45 degree angle. 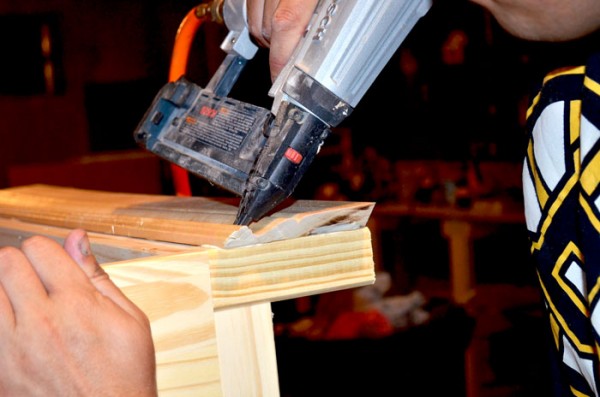 We glued and nailed the trim to the bottom of the dresser. I filled the nail holes and allowed the wood filler to dry. 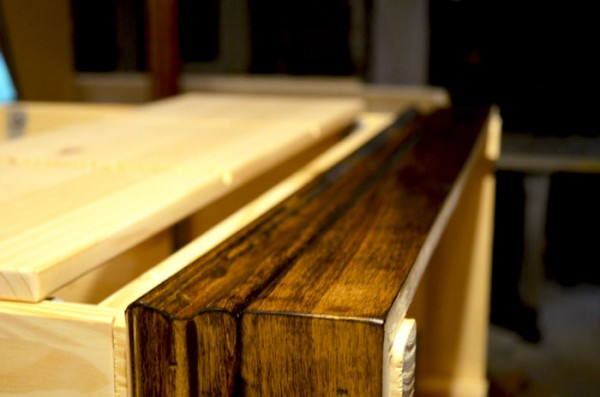 After the wood filler was dry, I sanded down the whole dresser with 220 grit sandpaper. I started by staining the base trim with Minwax Dark Walnut. I suspected from the sanding that the trim was softer and would absorb the stain differently, and that proved to be correct. I ultimately ended up adding a second coat to the bottom trim. 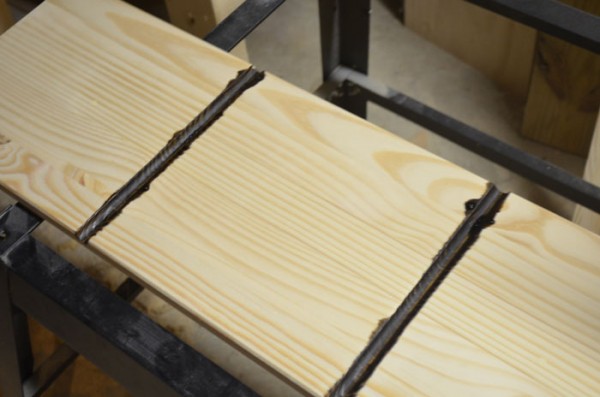 I wanted the groove details to appear darker, so I added the stain first, allowed it to sit, and then stained the rest of the drawer front. 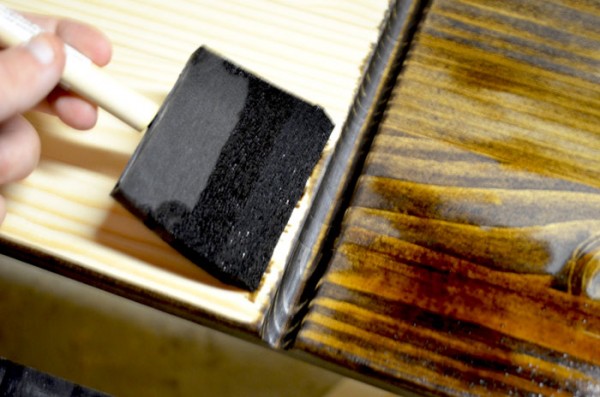 I didn’t allow the stain to sink in for very long before wiping it away, and I only did one coat- I loved the somewhat wild look of the PB version and this was an easy way to get a similar look.

After the stain was dry, I installed the drawer pulls. They were the perfect finishing touch! I plan to also apply some dark wax later on to finish it off. 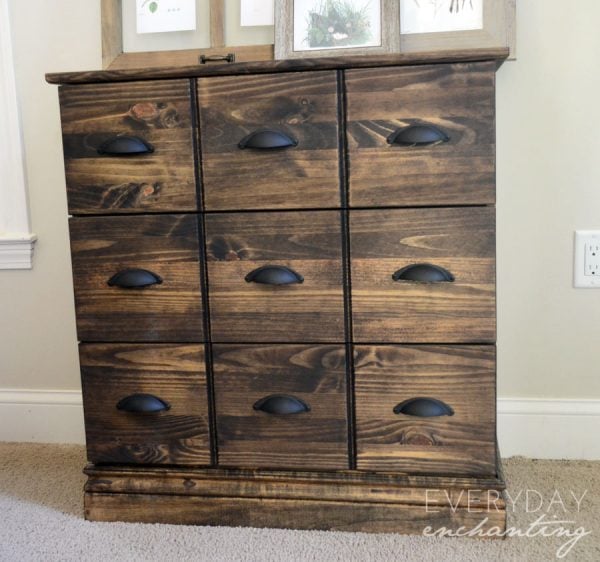 I honestly love it even more than the inspiration photo! It will be used in our living room for storing DVDs, Wii Games, and board games.

Time: approx. 3 hours including assembly (with drying times in between)

Try these other IKEA hacks to get a designer look at a discount price! 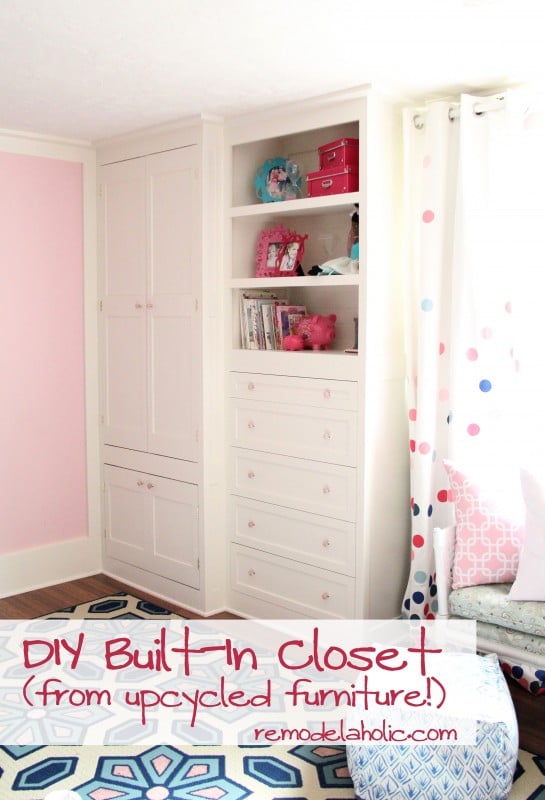 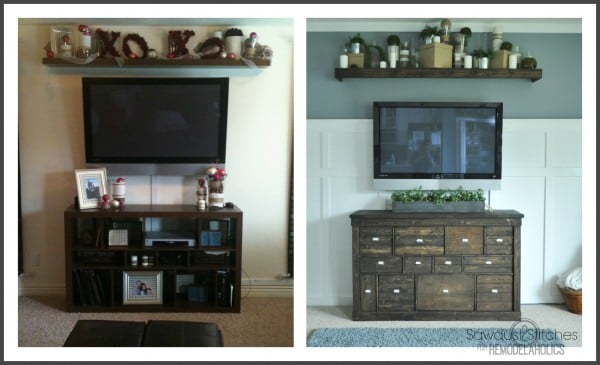 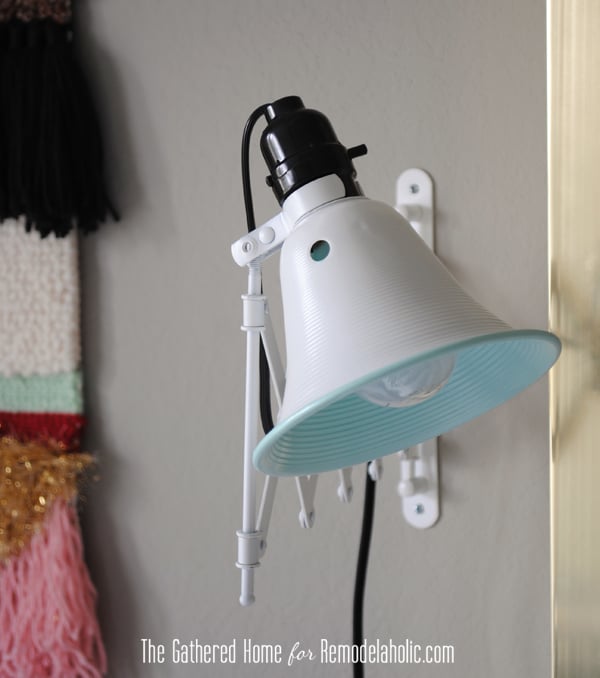 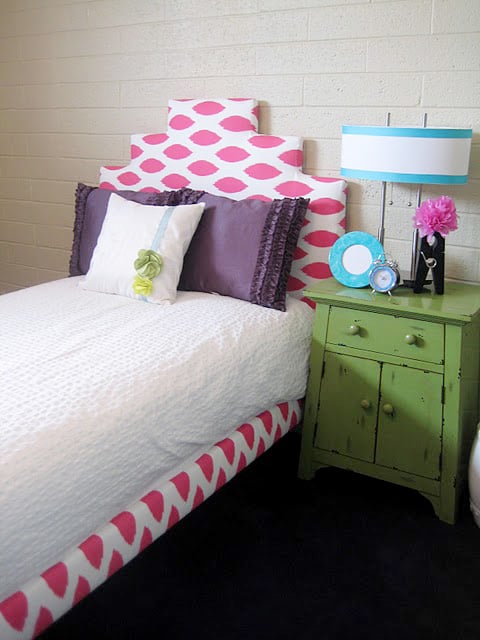 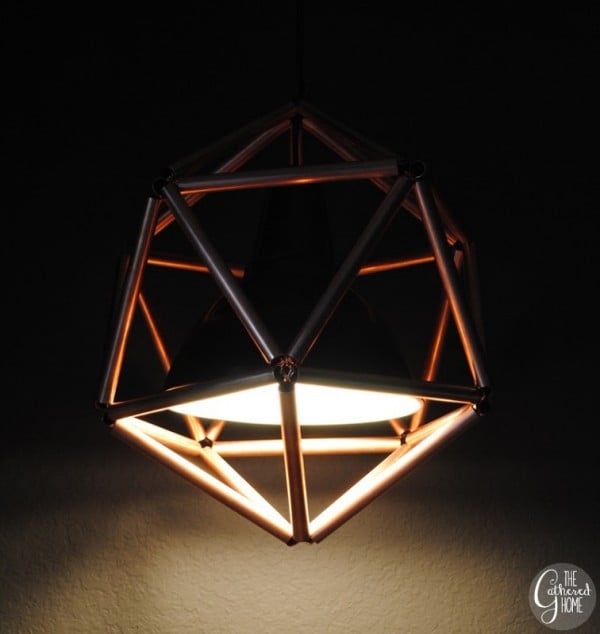 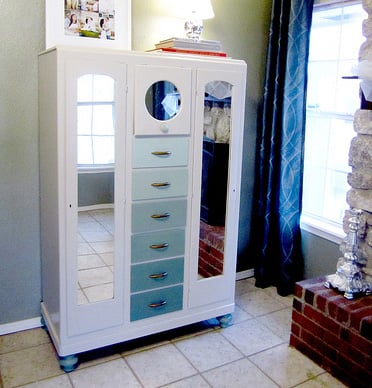 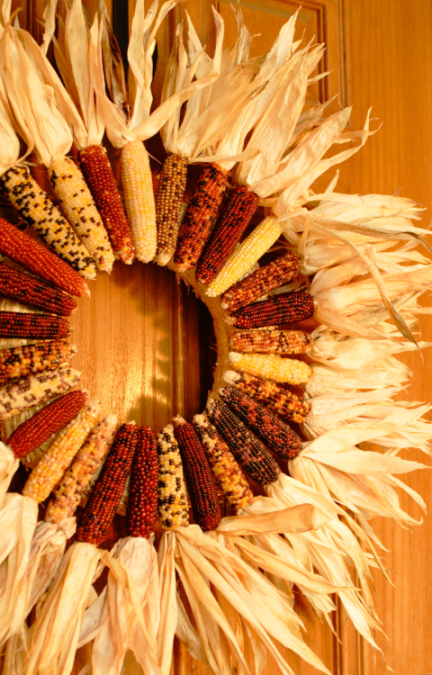 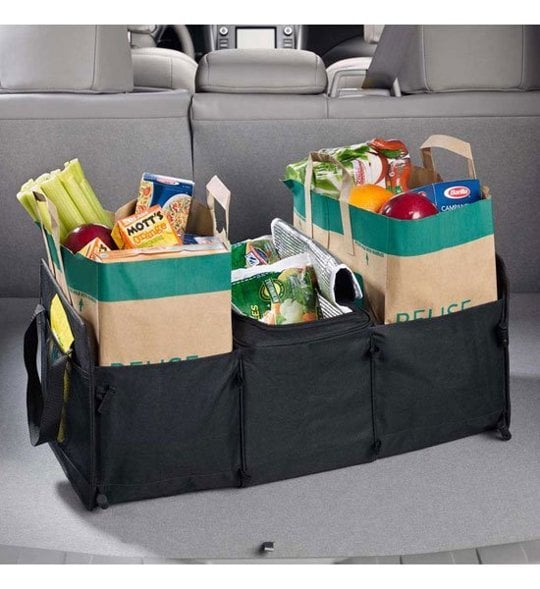 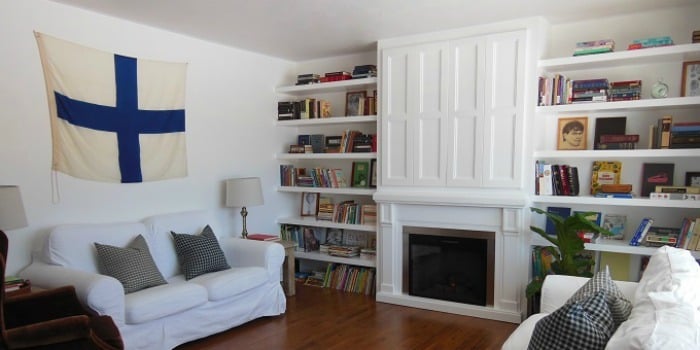 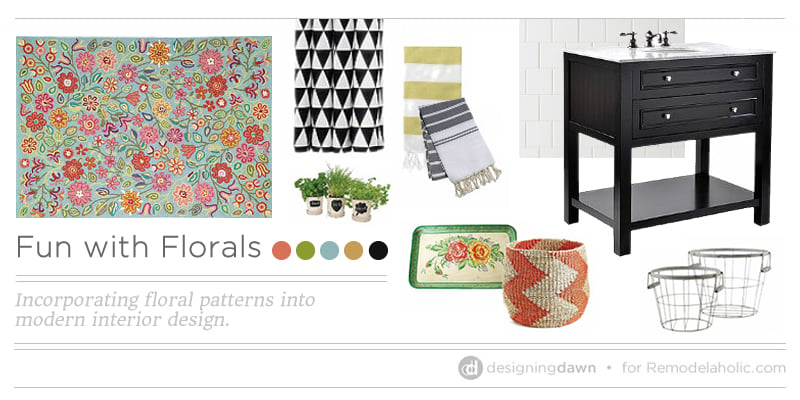