We’ve been chipping ever so slowly away at Etta’s Room, in between other projects.   Last thing you got to see was the confetti drapes tutorial I made after getting the new windows (I still LOVE those new windows!!).   But, I am feeling the stress of making anything actually totally happen, or I should clarify, actually finish this project!  UGH!  So while approximately 3 sides of the room are completely undone, I decided to clean up and make Etta’s bed nook look pretty!  It’s the little things that keep me going.

I showed you the fabric I bought for the room a while ago, but it is still all neatly and nicely folded, cuz making something, even a simple something is TOO overwhelming for my schedule right now!  You’ve heard of the straw that broke the camel’s back?  Well, sewing something right now, feels much like an additional bail of hay, let alone one single straw…  And I actually like to sew.

So, I have been shopping around for bedding, keeping in mind that (maybe someday) I will be in the right mood to make the little duvet cover/comforter that I had planned.  (and maybe a few additional pillows, not that I need them, but I just can’t seem to help myself when it comes to limiting the number of pillows I have in a room, its a sickness.)

I found a few that I liked that were a little more patterned,  but ultimately bought this adorable soft little coverlet, which was a decent deal for $50. bucks.  (Why is bedding stuff so expensive?) 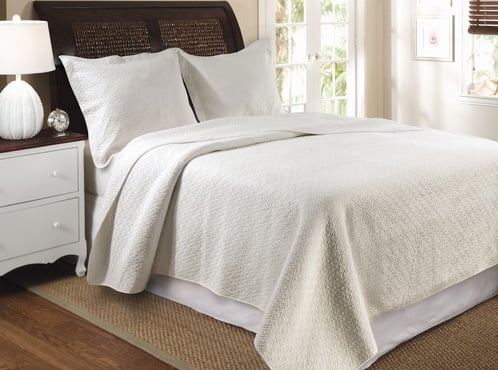 I was so relieved when it came because it is the exact color of the trim, so it matches perfectly! 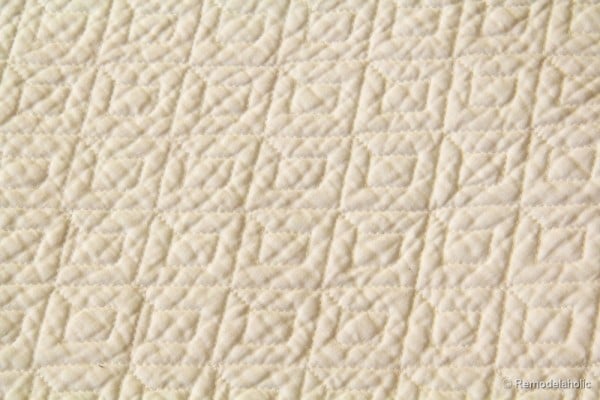 The best part is that I set up the bed to photograph, and even see if the room would come together.  I walked out to get something, and Etta went running into her room (she had been playing outside) she was yelling to the babysitter “I’M JUST GOING TO GET… (audible in take of breath, I could hear from the other room)” I walked in and she said really quietly, totally awestruck like she was in some sort of sanctuary.  “This is cool…  I really like it.”  And that ladies and gentlemen,  made this project TOTALLY worth it!! 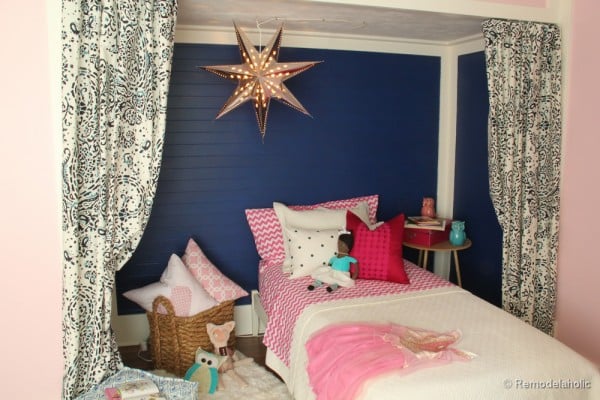 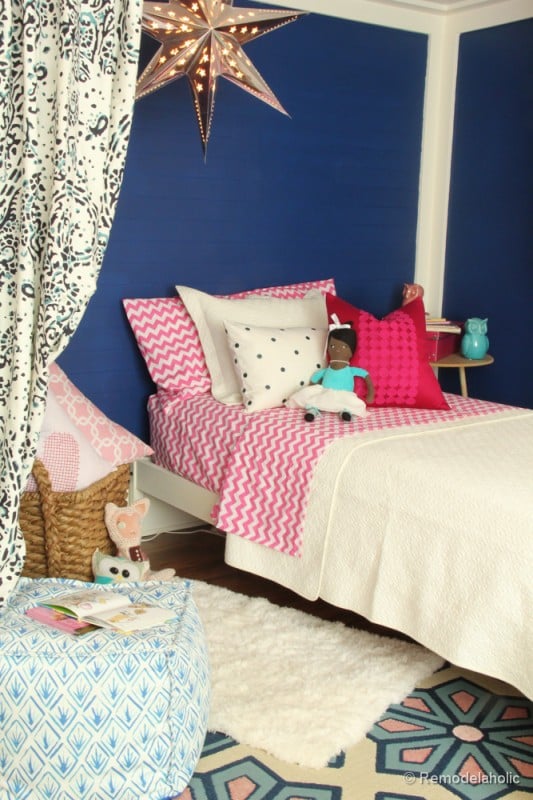 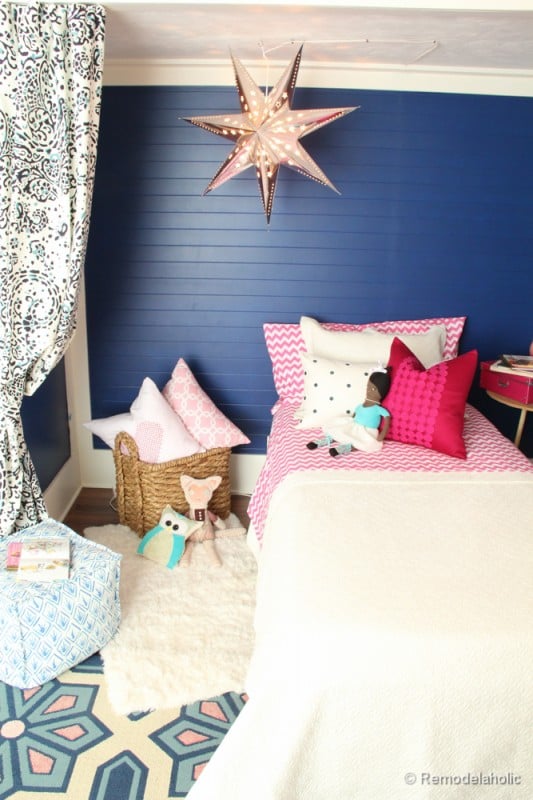 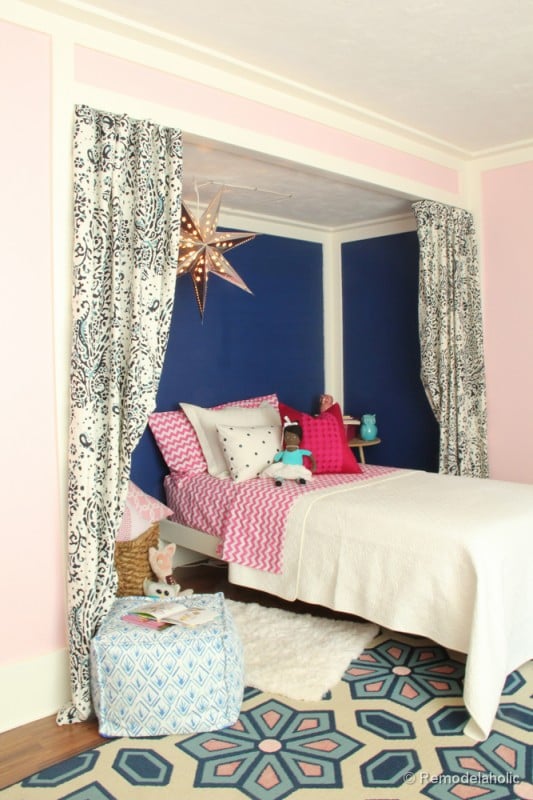 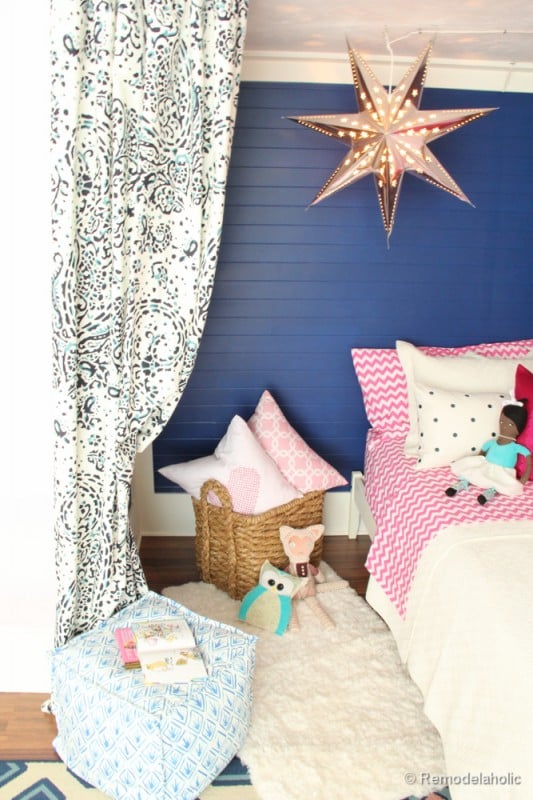 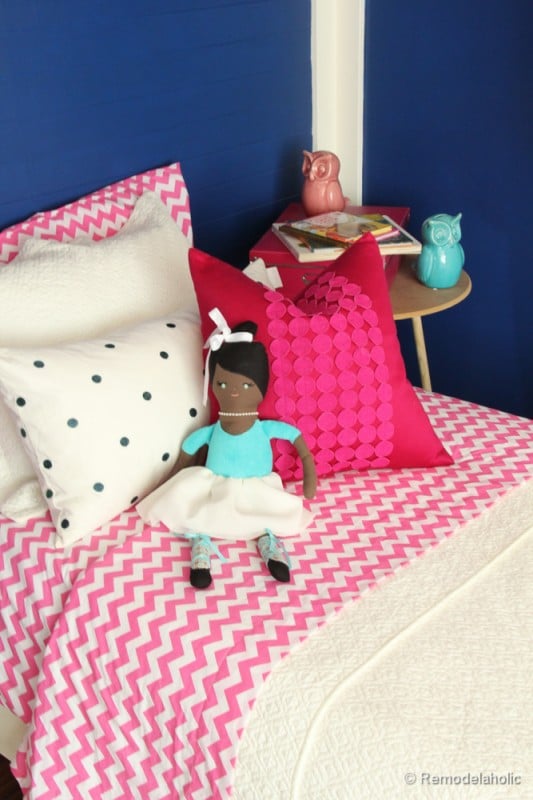 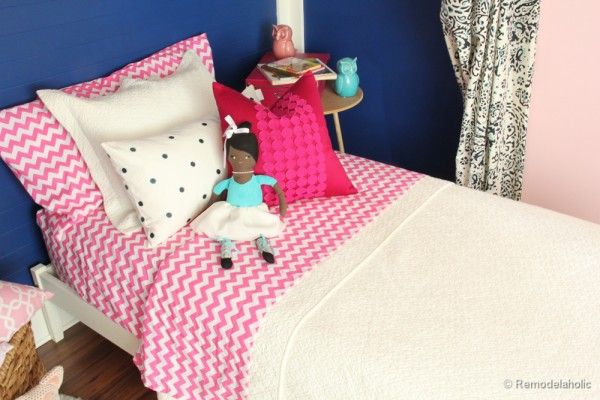 Headboard- I know that I just bought one for my bed, but I just am having a hard time considering spending the money on another one so soon.  Especially since they basically cost the same as amount mine, which is kind sized.  And I can’t seem to find one that I really like.  So I think it will be a DIY project (which means, be looking for me to actually finish that right before we move, I kid, well, actually I wish I were kidding, how unfortunate)

Nightstand- I just used one of those $3.00 tables from Walmart.

Drapery Rod- Confession: I pinned the drapes up to the trim with pushpins.  I need a real rod of some sort.  We will have to see how I do this, cuz I really don’t want to be looking at a rod.  But I want the option for the girls to close it if they want to create a little house, and Etta has already asked about 30 times to close here drapes in just the first hour.

Art- I need to add some art to the walls, I actually have most of what I plan to hang up, but I don’t want extra holes in the wall, and since the headboard is not accounted for, I might as well wait.

So what do you think of our little girl’s new bed nook??