I love a good upcycle (that’s actually what I started this blog to share, back in the day) — especially when it’s something random that would probably be junked, that can be saved and made into something new. Our next Holiday Guest repurposed old ceiling fan blades and some other “junk” into… 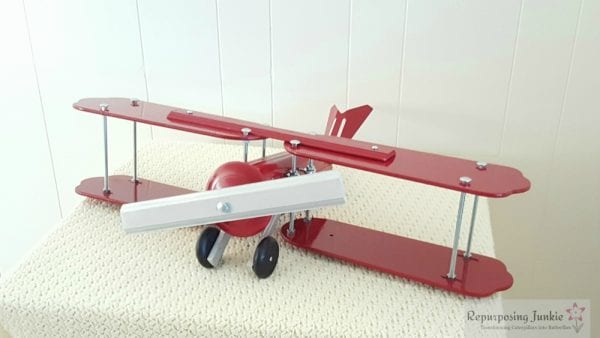 Read below for the details of Keri’s upcycled “junk” airplane and keep an eye curbsite for these other things you can upcycle:

books (with no damage to classics!) 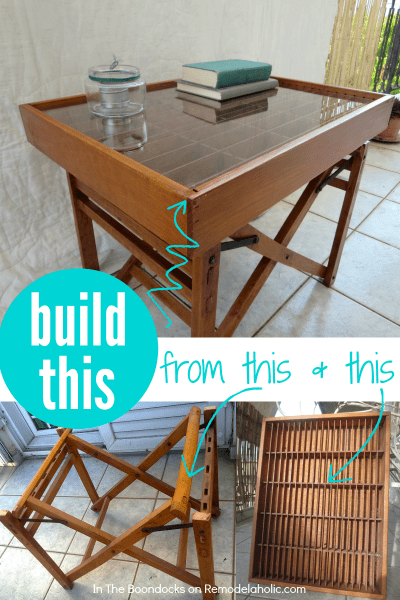 and of course, old windows (see this here)

Here’s Keri to knock your socks off with her creative skills! 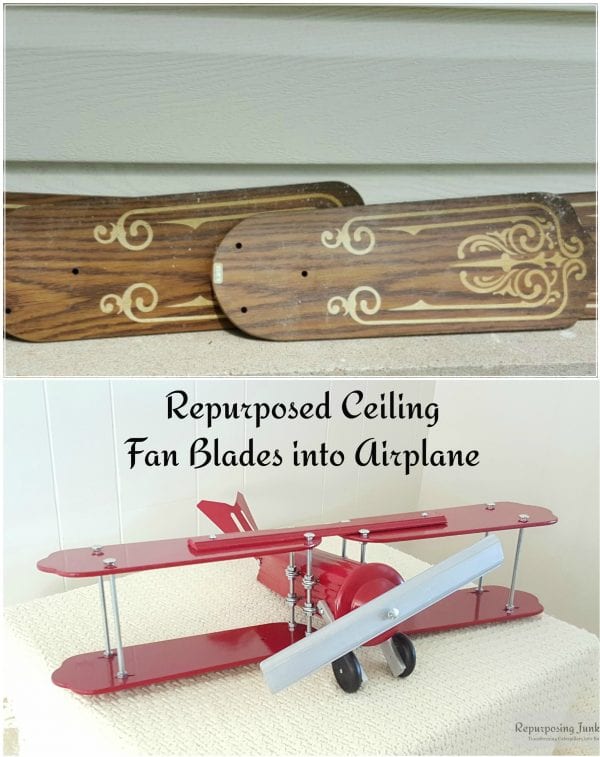 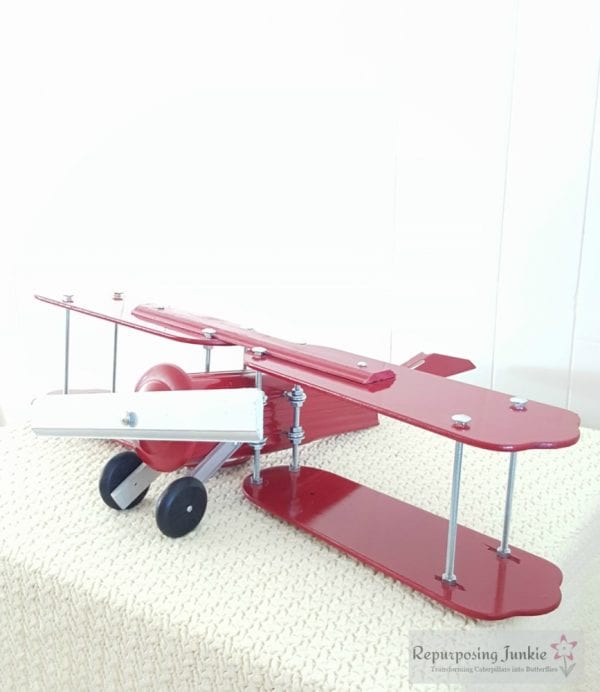 Hi! I’m Keri, blogger at Repurposing Junkie. I love repurposing and refinishing different projects. Everything I see takes on a different shape and idea of what it could be. In other words, I see potential in things. Some of my projects include, turning a faucet handle into a towel holder, repurposing a variety of materials into a toilet paper holder, and an early project on the blog- repurposing an electric guitar.

The project I’m sharing with you, Remodelaholics, started out when I took down some ceiling fan blades, from a fixture in our kitchen, and stashed them away waiting for inspiration. It wasn’t until I saw my daughter playing with a toy plane, that I knew those ceiling fan blades were destined to be repurposed into an airplane.

I looked for things that would work together to make an airplane. I found a gutter piece that was perfect for the body of the plane. My husband bent it on one end to make it look like the back of a plane.

A piece from an old antenna was used for the back wing. 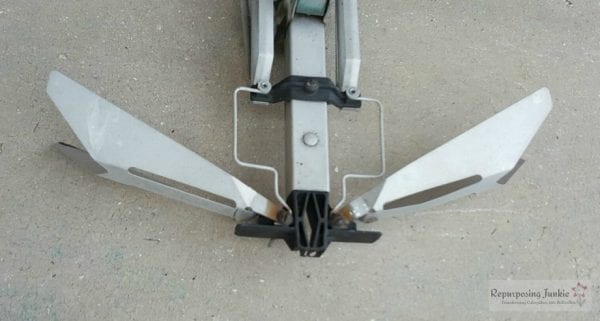 A cap from an old chandelier was used for the front of the plane. 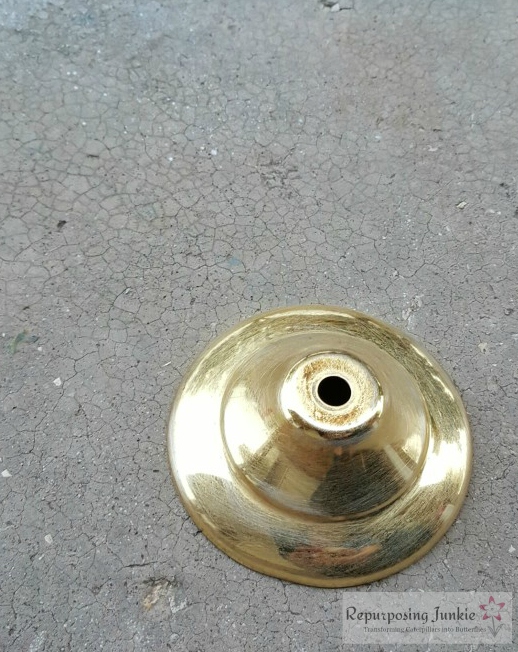 This piece of threshold trim was used as the front propeller.

Most of the pieces were painted red. 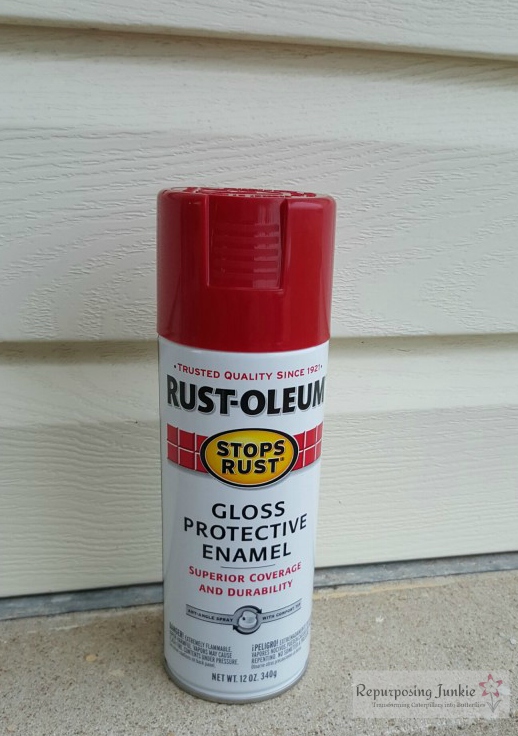 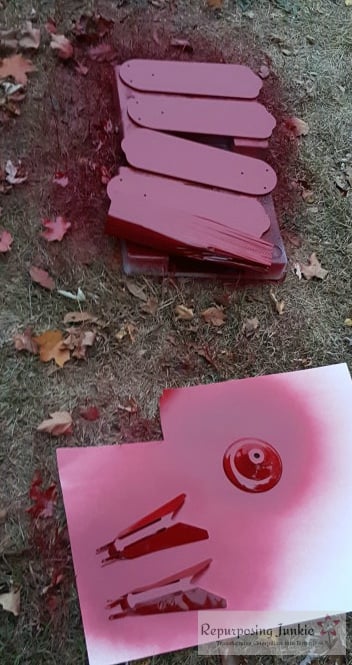 Two pieces from an old post were used as tires. Another piece of threshold trim was ripped and used to make the landing gear. 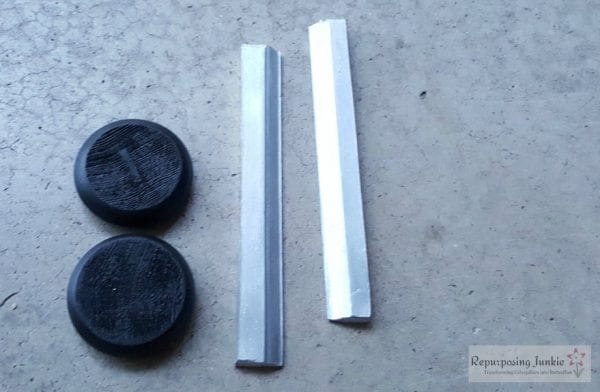 Now that I had all the pieces it was time to construct the airplane. I attached the threshold trim to the chandelier cap, using a 1/4″x 2″ bolt and 1/4″ nut, to make the front propeller piece,.

My husband drilled through the back of the gutter, and attached the back wing to the body of the plane, using a bolt and wing nut.

I screwed the wheels to the trim pieces to make the landing gear. 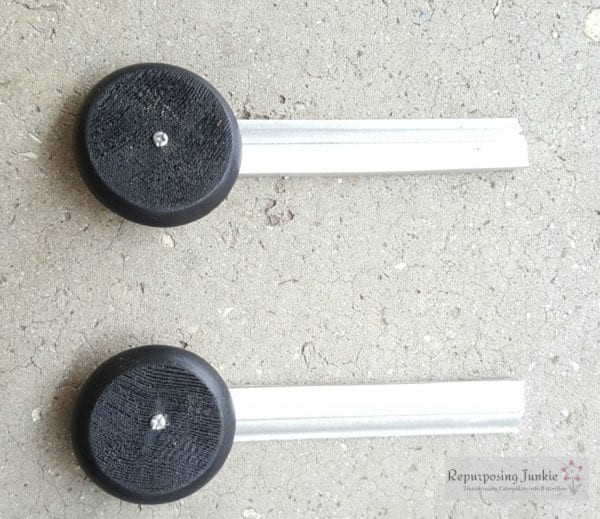 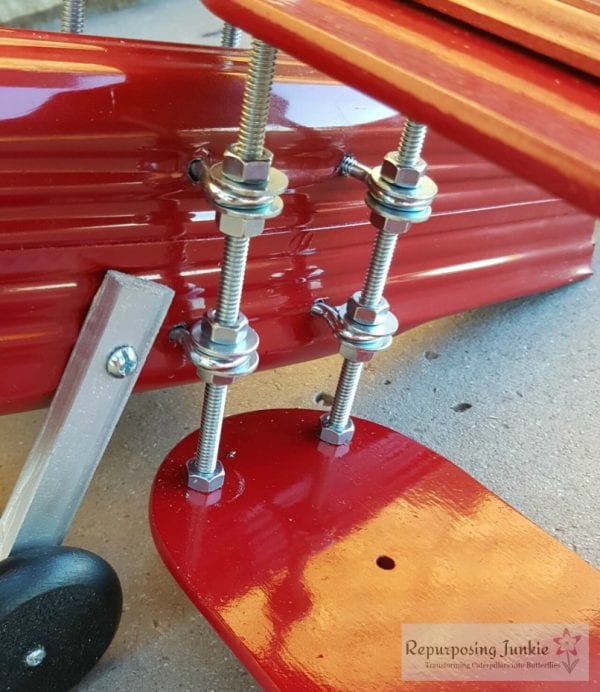 My husband drilled 1 hole on each side of the gutter. The landing gear was then attached to the body of the plane using a bolt and nut. 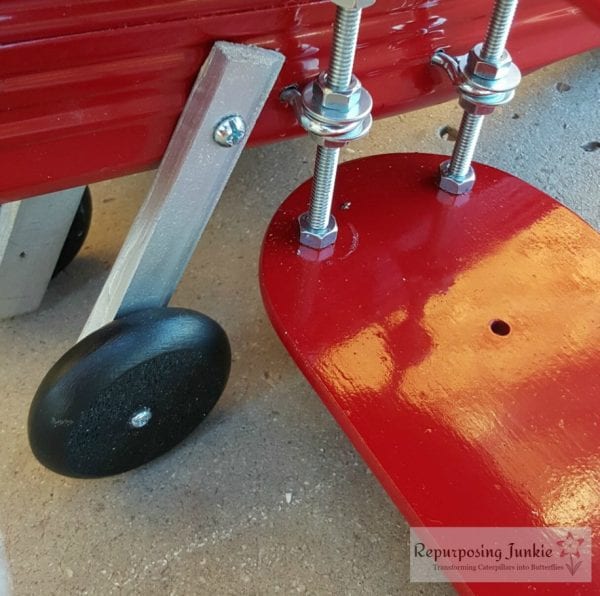 Another piece of threshold trim was painted red and fastened onto the top wings, with a bolt and nut system, to act as a brace. A wooden block was placed in the front of the gutter piece to give the body of the plane a little more weight. Then the front propeller piece was hot glued on the front of the gutter.
This project only took a few days and that’s off and on as we had time to work on it (we have 3 little ones and a house remodel underway). The only thing we purchased were the hooks, nuts and bolts and paint, a total of about $15. I also referenced a book, The Color Encyclopedia of Incredible Airplanes by Phil Jarrett. 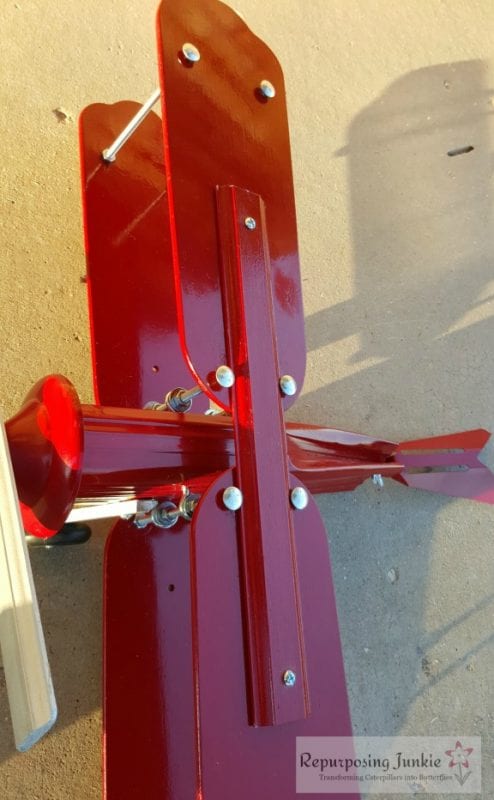 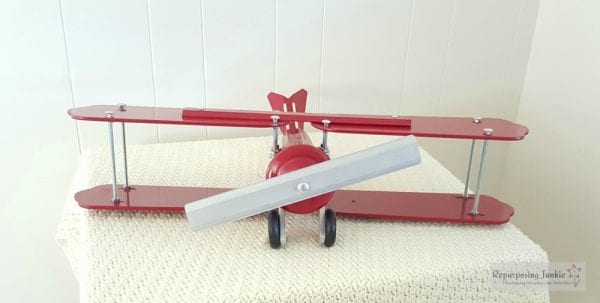 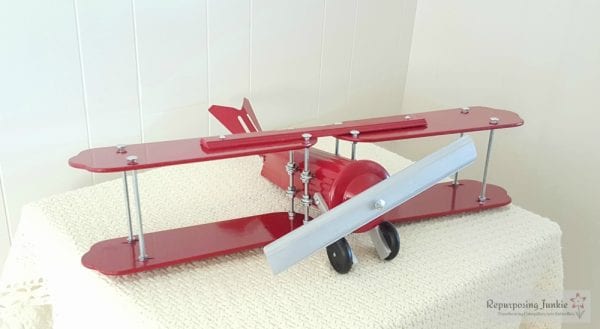 I love how it turned out!! 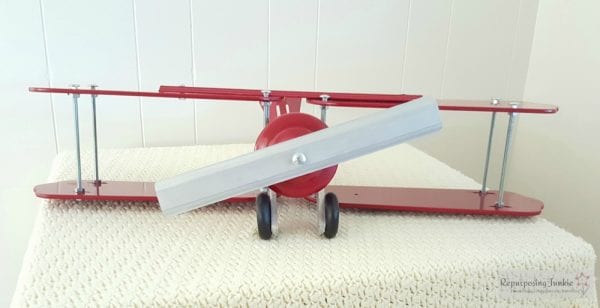 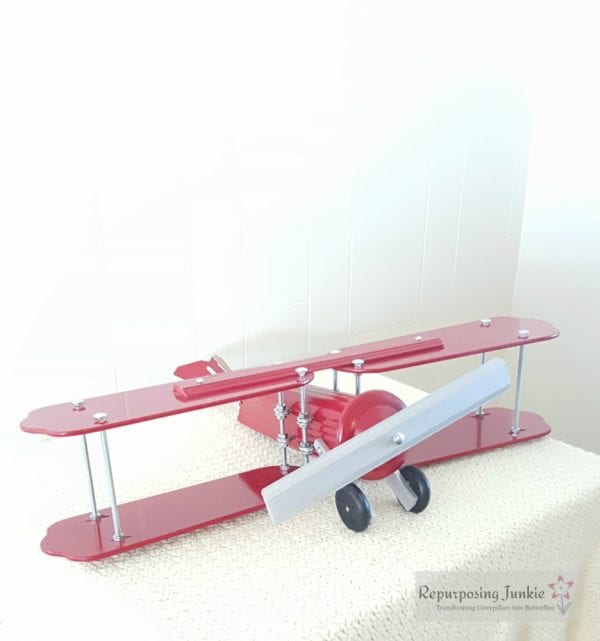 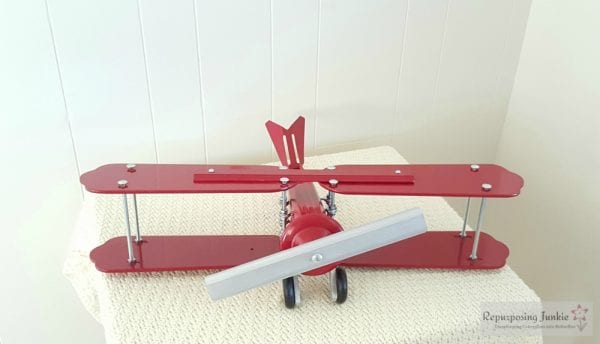 We’ll hang the plane from the ceiling in our home, so those fan blades can fly once more. 🙂 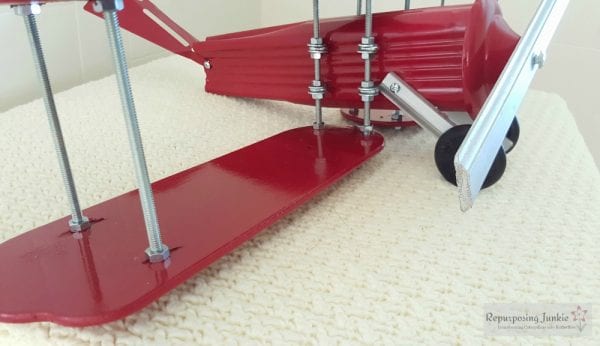 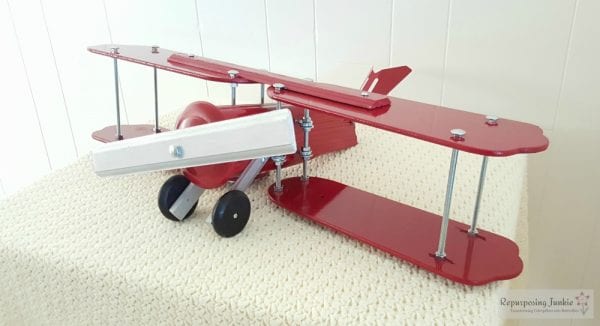 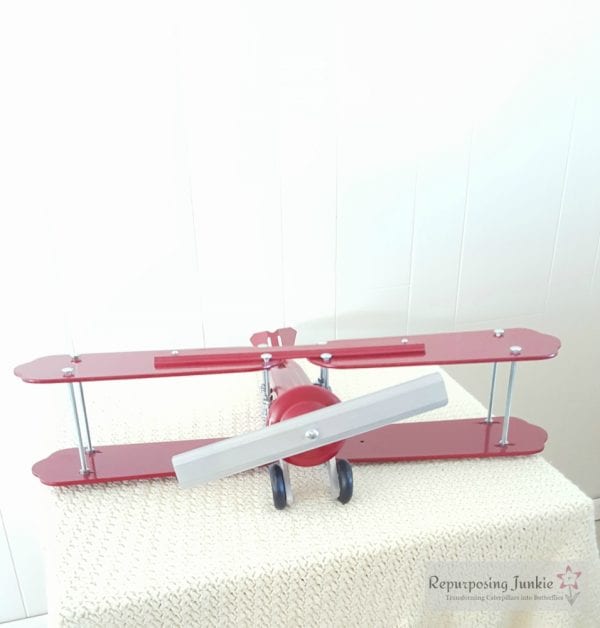 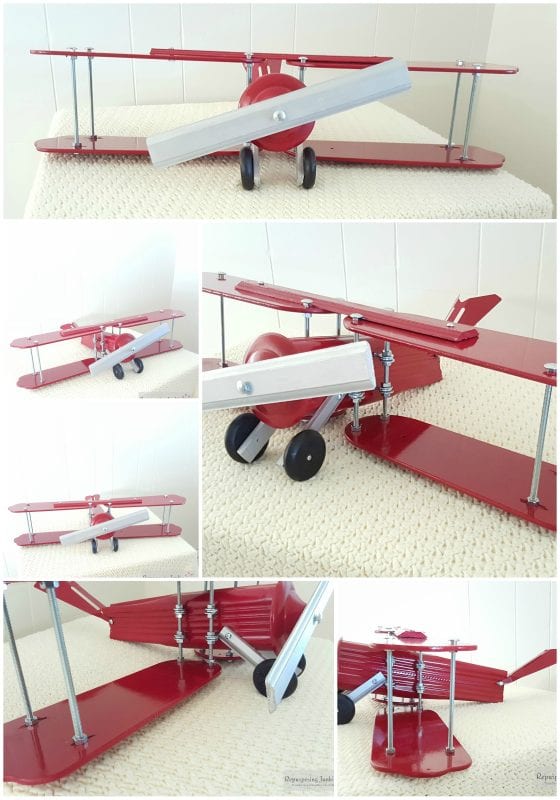 Thanks for letting me share this repurposing project with you Remodelaholics!! 🙂 Feel free to stop by and say “Hi” at Repurposing Junkie.

Keri, thank you so much for sharing with us! Your vision was amazing and it turned out AWESOME!

Remodelaholics, head over to Repurposing Junkie to see more from Keri (including more uses for ceiling fan blades!), and don’t miss her chalk painted upholstered bench!

Want to be featured? Link up here and submit your best project here. 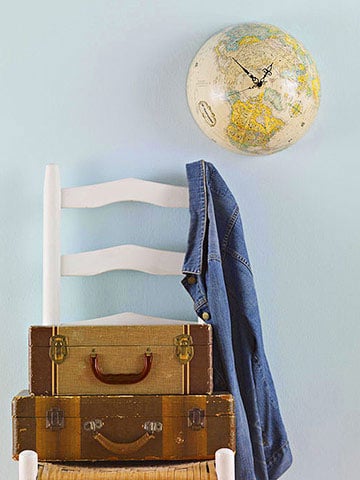 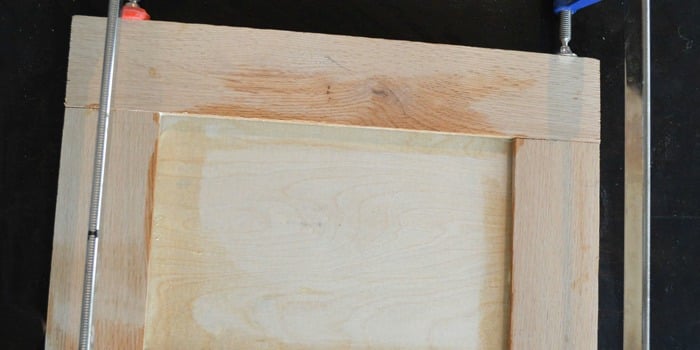 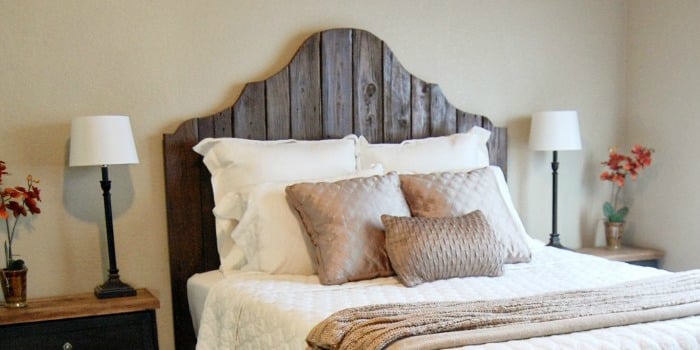 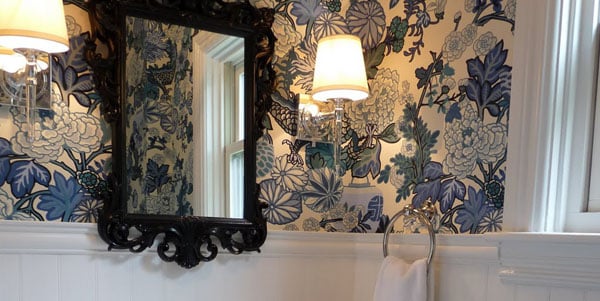 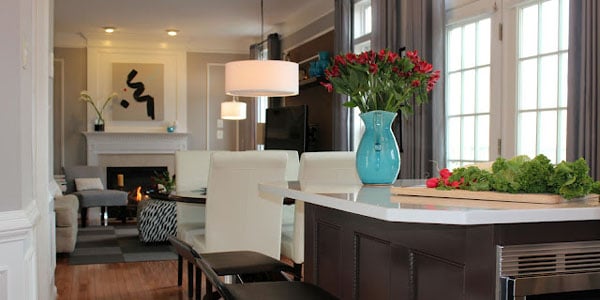